A Week in Jordan

Visit the highlights of Jordan including magnificent Petra 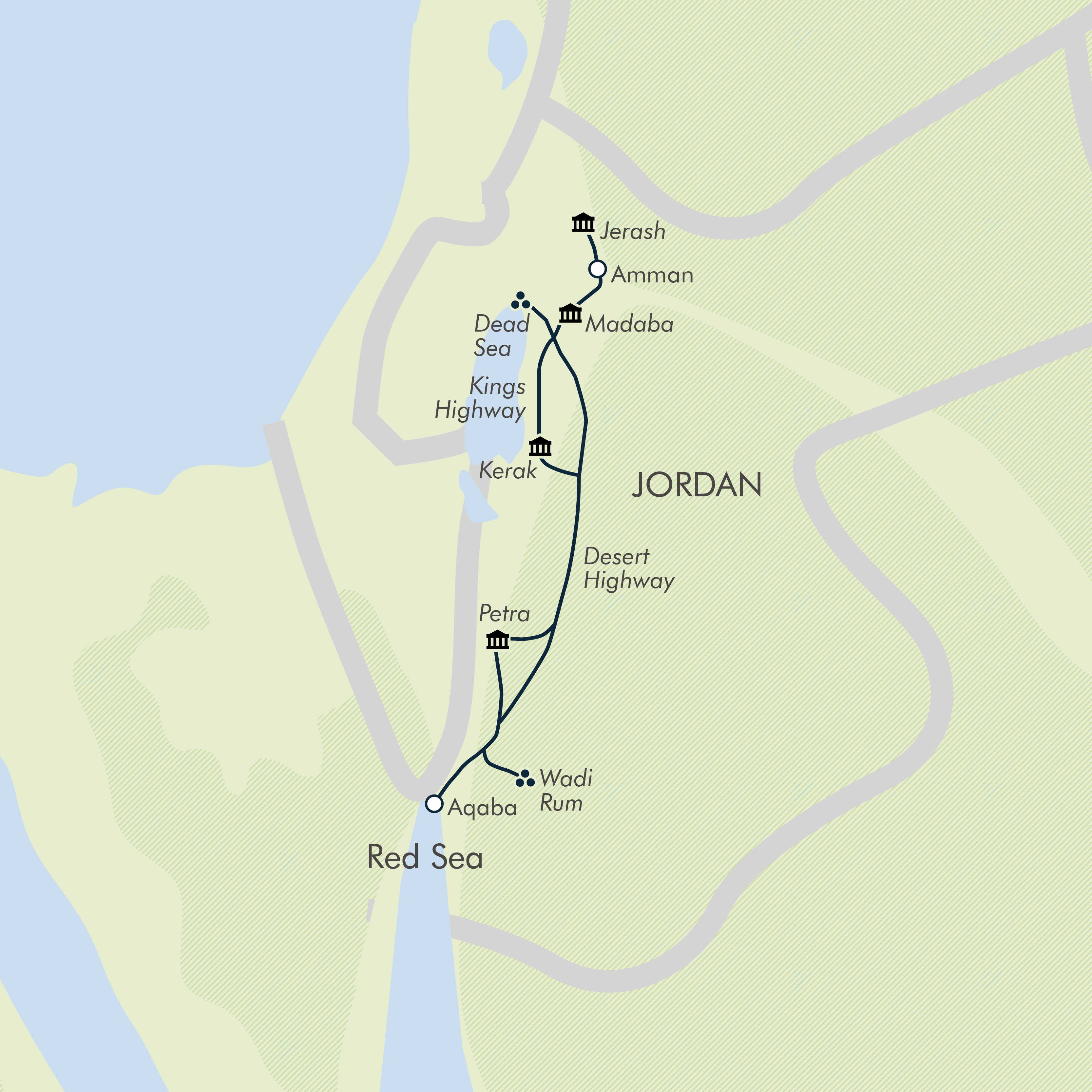 We start at our hotel in Amman on day 1 of the itinerary.  Those on the group flights from London will arrive in the evening.  Land only clients need to provide their flight details if they would like to receive a FREE arrival transfer. Your leader will leave instructions for you at the hotel. Hotel Toledo (4-star) or similar

Visit Jerash and take a city tour of Amman

This morning we drive north to Jerash, known as Gerasa in ancient times. This was one of the ten wealthy, self-governing cities of the Decapolis during Roman times, and was famous throughout the Roman world for the luxury of its lifestyle. Buried for centuries under blown sand, Jerash is the only city of the Decapolis to have survived, with a dramatic oval forum, colonnaded main streets which remarkably have the drains still intact, two theatres and the impressive temple of Zeus. After a good look around we head back to Amman for a city tour including the Citadel, the Roman Theatre and the old city.Hotel Toledo (4-star) or similar

Drive down King's Highway to Petra via Mt Nebo, Madaba and Kerak.

Today is a long driving day down the King's Highway which takes us up and down huge 'wadis' (valleys). There are several stops of interest en route including Madaba, known as the city of the mosaics, Mt Nebo and Kerak, which is a magnificent fortified town. Further south we reach the magnificent city of Petra; Jordan's premier historic site and one of the world's most outstanding ancient cities.Amra Palace (3-star) or similar

Two days to explore the expansive sights of Petra.

Two days to explore Petra, the so called rose-red city, 'half as old as time'. Petra was hidden for centuries until the Swiss explorer Burckhardt made his great discovery in 1812. It was founded by the Nabateans, an Arab tribe that arrived here in the 6th century BC. Building at Petra began in the third century BC and continued through the Roman period, financed by taxes levied on the desert caravans. Two features of Petra are unique: firstly, it is a city made defensible by being built down a series of chasms, rather than on a hilltop. Secondly, it is built directly into the rock - beautiful red and yellow sandstone carved into the most impressive facades which glow in the brilliant sunlight. To enter Petra we must begin by walking down a narrow chasm, known as the Siq, surrounded by high cliffs on either side. Unveiled at the end of the Siq is El Khazneh, the Treasury. This is just the first breathtaking sight of a remarkable day. Continuing to the centre of the city, we pass the houses and tombs of the rich citizens and the remarkable scale of the site begins to unveil itself.  A optional walk can then be done up 750 steps to El Deir, the monastery, with its superb facade topped by a huge urn. On the second day your guide will take you into the site for either a hike up to the High Place of sacrifice or for free time to explore the city further.  Only a few people attempt to visit the High Place as it can be quite arduous and is not recommended for those who are unsure of their fitness or are uncomfortable with heights. However, those who do make it to the top are rewarded with wonderful views over parts of the site visited on the previous day.Amra Palace (3-star) or similar

This morning there is the option to take a guided tour through Little Petra or you can relax at our hotel before we join the modern Desert Highway and make our way south to Wadi Rum.  The purpose of Little Petra is not clear however archaeologists believe it was probably a suburb of Petra where visiting traders on the silk route may have stayed.  Today we enter the natural world heritage site of Wadi Rum where dramatic sandstone mountains rise from the sandy desert floor is where Lawrence of Arabia and Prince Faisal assembled the Arab tribes for the attack on Aqaba in the First World War and also where sections of the 1962 epic film were shot. After checking into our private Exodus camp our Bedouin hosts take us for around a 2-hour 4x4 jeep trip to explore some of the highlights of the protected area. We go to the main popular sights, have time to sample bedouin tea and then watch the sunset from the vantage point of a rock formation.  From here we return to our camp where we enjoy Bedouin hospitality with a traditional dinner called Zarb which is cooked underground.  After dinner we learn about Bedouin culture and music through interacting with the family who run the camp. Exodus Private camp (permanent Bedouin camp)

We wake amidst the dramatic desert scenery and then make our way on to Aqaba, Jordan's port and holiday resort, famous for beautiful coral reefs.  There is time to relax on a local beach resort with transport and entrance included.  You can add to the experience by hiring snorkelling equipment and swimming over the coral reef looking out for colourful fish.  This can be arranged and paid for on the day at the resort.  (10 JD at time of publishing) You will walk along a jetty and get in from a small ladder to ensure you don't walk on the coral. There are several good restaurants in Aqaba for our evening meal together.La Costa Hotel (4-star) or similar

Drive from Aqaba to the Dead Sea and enjoy a float

Leaving the Red Sea behind we will head to the Dead Sea (approximately 4 hours 30 minutes) which is one of the most fascinating places on earth and so called because its high salinity prevents most forms of aquatic life. There' plenty of free time to experience floating in these waters and trying the dead sea mud before cooling off in the swimming pool.There's also the chance to visit Bethany beyond the Jordan, the site of Jesus Christ's baptism by John the Baptist marking the beginning of the new era of Christianity. This is an optional trip that can be booked and paid for locally. The drive to the Baptism site is 10-15 minutes from the hotel at the Dead Sea and the entire visit usually lasts 1 hour 45 minutes in total, including the driving to/from the hotel. Those who do not wish to visit the site will check into their hotel in the Dead Sea.This evening there will be a group dinner to celebrate your time in Jordan and say your farewells. Holiday Inn Dead Sea (5-star) or similar

Trip ends at the Dead Sea.