A spectacular cycling route through the Italian and French Alps 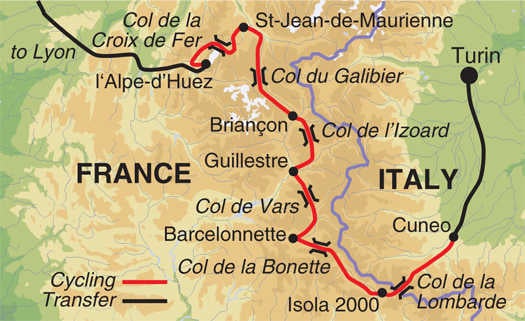 Start Cuneo in the Italian Alps.

Cuneo is a provincial capital in western Italy whose old town centre dates from the 12th Century when it was a fortified town. The Renaissance style arcaded main street is lined with shops and cafés giving it an elegant appearance. Cuneo was made famous in the cycling world in 1949 when the legendary Fausto Coppi dominated the stage there to win the Giro d'Italia. More recently it was a start town for the Tour de France stage to Jausiers in 2008. In the evening there will be a welcome meeting and a chance to check bikes and make any final adjustments. *Standard Hotel*

Ride from Cuneo to Isola across the Col de la Lombarde.

In the morning we enjoy a nice gentle warm up cycling along the Stura Valley to the village of Pratolungo. From here we start the Hors Category climb of the Col de la Lombarde (21.3 km, avg. 6.8%), located on the French/Italian border at 2351m. The climb was last used during stage 16 of the 2008 Tour. From here we are rewarded with a long downhill to the ski resort of Isola 2000. We then descend further down to to the village of Isola where we spend the night. *Standard Hotel*

Ride to Jausiers over the Col de la Bonnette.

After breakfast we descend to Isola (862m) where we reach the Tinée Valley. The valley is very narrow and typically alpine, with superb views and some attractive waterfalls. A relatively gentle climb brings us to Saint Etienne from where we tackle the infamous Col de la Bonnette (26km, avg. 6.5%), one of the highest paved cols in Europe (2802 m). This climb has only been used a few times during the Tour (in 1962, 1964, 1993, 2008 and 2016) but really is one of the highlights of the trip. After catching our breath we descend to Jausiers, where there'll be the option to climb to either Super Sauze or Praloup. *Standard Hotel* * *

Today's ride is a little shorter but still very challenging! In the morning we ride up to Jausiers and then climb the beautiful Hors Category Col de Vars, climbed 20 times since 1947 in the Tour de France. (2108m, 15km, avg. 5.5%). Here we enter the spectacular Hautes Alpes and enjoy some great mountain views on the ride down to Guillestre on the border of the Queyras Regional Park. If you'd like to do a few more miles then in the afternoon there's the option of a nice steady loop to Embrun or the more challenging climb to the ski resort of Risoul. *Standard Hotel*

Ride to Briançon across the Col d'Izoard.

The Hors Category Col d'Izoard (2360m) is a unique place to cycle and one of the greatest cols of the French Alps (32km, avg. 4.5%). The Tour organisers clearly agree as it has been included 23 times in the race since 1947! The scenery here is beautiful, from the sandy coloured eroded cliffs above the 'Casse Deserte' near the summit to the green wooded mountainsides above Briançon where we stay. From Briançon you have the option to continue on a relatively flat ride along the Clarée valley, or to climb the Montgenevre pass on the Italian border. *Standard Hotel*

This morning the 'Giant of the Alps' awaits us, namely the Hors Category Col du Galibier (2645m). It is a mammoth 37km of climbing from Briançon, but it is the final 21km where the effort really kicks in at an average gradient of 6%. In 2011 the summit saw a solo stage win for Andy Schleck, but the real drama was a little further down the mountain as Thomas Voeckler heroically retained the yellow jersey with a mere 15 seconds to spare. A monument in homage to Henri Desgranges, the founder of the Tour, sits at the top of the Galibier. A seemingly endless descent brings us to Valloire where we have a short 4km uphill section to the Col du Telegraphe (1566m). We can stop here for an Orangina and take in the spectacular view over the valley below. From here we still have about 11km of descending down to the Maurienne valley and Saint Jean de Maurienne, where we spend the night. It is possible to extend the ride with a nice circular route to Bonvillard, or we can cycle up the Lacets de Montvernier, a spectacular climb which featured in the 2015 Tour de France. *Standard Hotel*

For our final days ride, two superb challenges are on the menu! We warm up on the Hors Category Col de la Croix de Fer (2067m, 30km, avg. 5%). This is a lovely peaceful climb that has featured 15 times in the Tour since 1947. But no cycling trip to the Alps is complete without tackling the legendary 21 hairpin bends on the iconic climb of Alpe d'Huez (1845m, 14km, avg. 8%). From Bourg d'Oisans the road immediately ramps up with some of the steepest sections and is often the scene for the first attacks. 'The Alpe' has been climbed 29 times in the Tour since 1952 and the names of many of the winners are marked on plaques on the hairpins. The late Marco Pantani's record of 37 minutes 35 seconds in 1997 is quite humbling! Tonight we celebrate the weeks achievements in Bourg d'Oisans at the foot of Alpe d'Huez. *Standard Hotel*

Spend the morning relaxing in Bourg d'Oisans before the trip ends here. **