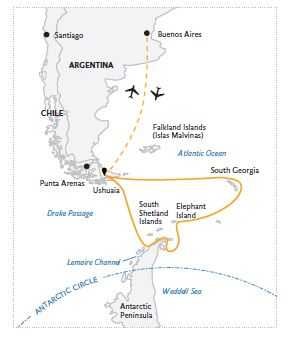 Arrive in Buenos Aires at any time during Day 1 of your itinerary. Upon arriving in this splendid city, known for its architecture and rich European heritage, you will independently transfer to your group hotel (pre-expedition hotel night included in mandatory transfer package).

Fly to Ushuaia and embark.

After an early breakfast at the hotel, the group will transfer to the airport and board our private charter flight to Ushuaia, Argentina.   Upon arrival, you will be transferred from the airport to a central downtown location to have some time on your own to explore this quaint port town before making your way to the pier. Embarkation will occur in the late afternoon, after which your vessel will sail down the historic Beagle Channel, which transects the Tierra del Fuego archipelago in the extreme south of South America. Expect an air of anticipation as you depart!

Not only will guests experience the much-anticipated crossing of the Drake Passage, considered by many to be a polar rite of passage, they will also enjoy one-of-a-kind presentations from the expedition team members—and from our two distinguished special guests who have delved deeply into the life of Sir Ernest Shackleton. In 2013, environmental scientist, author and explorer Tim Jarvis—with a crew equipped in era-authentic gear—re-enacted Shackleton’s 800-mile (1300 km) journey from Elephant Island to South Georgia in a replica of the 23-foot whaler James Caird. In fact, the foreword to Jarvis’ book, 'Chasing Shackleton: Re-creating the World’s Greatest Journey of Survival,' was written by Alexandra Shackleton, granddaughter of Sir Ernest.  Also on board as guest presenter: mammologist, paleontologist, anthropologist and polar historian Ross MacPhee, a curator at the American Museum of Natural History, which hosted the ground-breaking exhibit 'The Endurance: Shackleton’s Legendary Antarctic Expedition.' MacPhee is the author of 'Race to The End: Amundsen, Scott, and the Attainment of the South Pole.'  MacPhee, who has participated in more than 50 scientific expeditions (including both Polar Regions), has also researched the extinction of early mammals who roamed Antarctica 45 million years ago.

The most common reaction upon reaching the White Continent is a sense of reverence and awe. The experience is hard to put into words, since few places are as untouched and enduring as Antarctica.  You will discover that Antarctica is a land of extremes. At one moment you’ll be overcome with a feeling of complete isolation and silence, and at the next moment you’ll be inspired by nature as a calving glacier crashes into a brilliant blue sea or a penguin waddles by to inspect your footwear.  Your Expedition Team will take care of you at each excursion, whether you are Zodiac cruising, visiting a historical site or consorting with penguin colonies. Chinstrap, Adélie and Gentoo penguins are found here, along with Weddell, Fur, Crabeater and Leopard seals. Keep a lookout for Antarctic whales, such as Minkes, while on a Zodiac cruise. Each day and each excursion will present a new collection of creatures to delight you and keep your camera busy.  As exciting as the Zodiac excursions and landings are, perhaps you’ll treat yourself to an extra-special Antarctic experience by partaking in an optional paddling excursion (at an extra cost) or cast reason aside and jump into Antarctic waters for the Polar Plunge!

The Weddell Sea has profound meaning for admirers of Shackleton. This is where the explorer’s ill-fated ship, Endurance, crushed by pack ice, disappeared into the harsh waters in 1915. Despite the extreme harsh environment, the Weddell Sea region is known for its rich wildlife: seals, penguins and baleen whales. Aboard Ultramarine—with its two twin-engine helicopters and 20 quick-launching Zodiacs—you’ll be able to explore by sea and air, an experience never before possible until the launch of this game-changing expedition ship.

Throughout the voyage, guests will enjoy one-of-a-kind presentations from the expedition team members—and from our two distinguished special guests, Polar experts Tim Jarvis and Ross MacPhee. Your days at sea are also perfect for experiencing the superb luxury amenities of Ultramarine, which include a spa and a sauna with floor-to-ceiling windows that allow guests to stay connected to the Polar environments while enjoying relaxing moments onboard the ship. Ultramarine also has more wildlife viewing stations than any ship of its size, so you’ll have plenty of opportunity to stay on the lookout for birds and other wildlife while at sea.

On April 9, 1916, after spending 165 days drifting through the hostile ice of the Weddell Sea, Shackleton and his crew reached remote Elephant Island, one of the outermost islands of the South Shetland Island chain. Arriving here today, 100 years later, you will see the island exactly as Shackleton and his men first encountered the brutish landscape. Yet to the stranded crew, Elephant Island was a haven, offering vital shelter while they waited anxiously to be rescued.   We hope to visit Point Wild, located on the northern shores of the island, where Shackleton and his men were able to come ashore. This was the location where Shackleton launched his epic 650-mile (1046 km) boat journey aboard the James Caird, and where his men waited for his return. If conditions are ideal, we will launch our Zodiacs to get as close as possible to land, where guests can appreciate the immensity of the Shackleton feat.

Say goodbye to the Antarctic Peninsula, as your next destination is South Georgia!  We invite you to join us as we mark the first-ever New Year celebration on Ultramarine, the first ship purposely built for Polar exploration. The inaugural season of Ultramarine, much like Shackleton’s feats in Antarctica, makes for a memorable moment in Polar history. In addition to the New Year’s celebrations aboard Ultramarine, your days at sea are filled with presentations led by our two special guests and your Expedition Team, who will prepare you for the wildlife and landscapes that await you in South Georgia.

South Georgia is one of the most fertile breeding grounds in the world for sub-Antarctic wildlife, with beaches blanketed with penguins and seals. It won’t take you long to realize that you are in a bird paradise, as burrowing seabirds, albatross and petrels can be seen in abundance. You’ll find that on South Georgia, once a popular base for whalers and sealers, visitors can see abandoned relics and evidence of human activity from centuries gone by. Your Expedition Team will help bring those days to life while you visit old whaling stations and enjoy presentations on the South Georgia of then and now. In re-creating the voyage of the James Caird, Shackleton’s heroic open-boat journey from Elephant Island to South Georgia, our first planned destination on the island will be King Hakkon Bay—the very site where Shackleton and his men landed before traversing the island’s harsh interior.  South Georgia is particularly significant and, for many guests, a poignant stop on this voyage that celebrates the life of Sir Ernest Shackleton, whose enduring legacy of Polar exploration lives on through the Quark Expeditions team today. After Shackleton’s death on January 5, 1922, the explorer’s widow insisted her husband be buried in South Georgia, which figured so prominently in his life and dreams. If conditions allow, we hope to visit Grytviken, one of the first whaling stations established in the sub-Antarctic waters. It’s also the site of the modest cemetery where Sir Ernest Shackleton is buried. Guests traditionally gather at Shackleton’s grave to pay homage and raise a toast to one of history’s greatest Polar explorers. In addition to a historical visit to Grytviken and other whaling sites, you will have the opportunity to visit many of the pristine beaches, coves, and fjords that line the protected northern coast of the island. The wildlife density in South Georgia is unlike anywhere else in the world, and each stop during our journey will bring new adventures.

After more than two weeks of unique wildlife encounters and remarkable landscapes, your journey home begins. Spend time on deck watching for seabirds and whales, enjoy presentations by your Expedition Team, rejuvenate in the sauna with floor-to-ceiling windows, indulge in the luxury amenities of Ultramarine—including its spa-inspired suites and beautifully designed lounges and restaurants—or simply relax and reminisce about your experiences.

Disembark in Ushuaia and fly to Buenos Aires

We will arrive in Ushuaia in the morning after breakfast. After disembarkation, we will taste a little of Patagonia by touring Tierra del Fuego National Park before we transfer to the airport for the return group charter flight to Buenos Aires.