Most ships that leave Ushuaia head to the great white continent and back, but this one-of-a-kind edge of the world expedition takes you to the rarely visited islands of the Tierra del Fuego and Diego Ramirez, and up among a remote network of coastal fjords and channels where impressive glaciers and waterfalls tumble from the towering mountains into the icy waters below. Jump in a Zodiac to spot the area’s abundant wildlife and make landfall on the endless islands and inlets that make up the Alberto de Agostini and Torres del Paine national parks. If you’re looking for a different type of land’s end adventure, this is it. 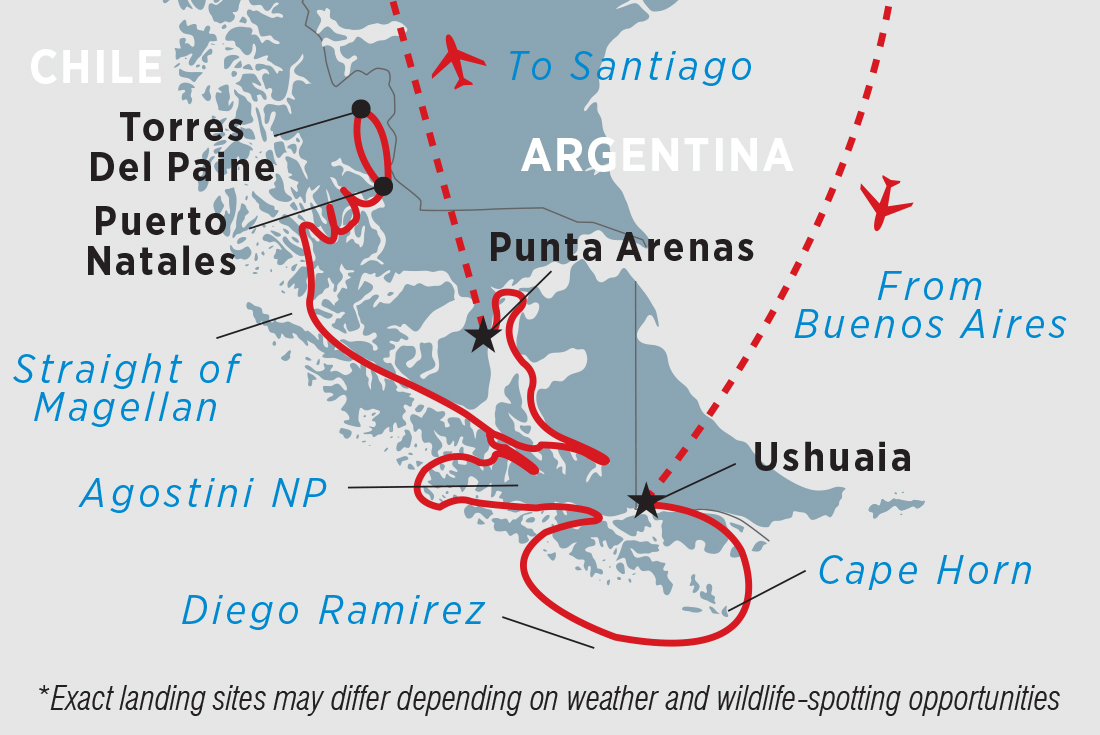 Welcome to Buenos Aires, where your Antarctic adventure begins. Arrive into the city any time today, and make your way to the hotel. There’s plenty to see and do if you arrive early into Buenos Aires. The city features an eclectic mix of European, Latin and cosmopolitan influences, with a thriving cultural and nightlife scene. Comb the antique markets and cobbled streets of San Telmo, see the presidential palace of the Casa Rosada in the Plaza de Mayo or pay your respects to Eva Peron at the famous Recoleta Cemetery.

After breakfast at the hotel, transfer to the airport and board a private charter flight to Ushuaia, the Patagonian port town at the ‘end-of-the-world’. Later, set sail through the historic Beagle Channel, which transects the Tierra del Fuego archipelago and opens up into the Southern Ocean. Photo opportunities abound, as dramatic coastlines emerge and seabirds sore overhead. It’s possible to spot seals, penguins, cormorants and more from the deck. Settle into your cabin and get to know the expedition team and your fellow travellers.

Take a different route out of the Beagle Channel if conditions are right today and aim to start your journey to the “edge of the earth” at Cape Horn (Cabo de Hornos). Here, at the very southern tip of the Tierra del Fuego collection of islands, is the most isolated place in the Americas. The rocky headland of Hornos Island once looked over a major global trade route from the 18th to 20th centuries and, if conditions are right for a landing, you might be able to hike to the Stella Maris Chapel, lighthouse, and albatross-shaped monument that honours the mariners who never made the journey round the horn.

Continue on even farther south to the totally isolated and barely explored Diego Ramirez Islands. Discovered in 1619 and once thought to be the world’s most southernmost landmass, you’ll have the chance to Zodiac cruise around these tussock grass-covered islands to spot the abundant birdlife – look out for black-browed albatross, shy albatross and grey-headed albatross, plus sightings of dolphins, South American fur seals, and rockhopper, macaroni and Magellanic penguins are also possible here.

The ship will turn back north towards the southern edge of Tierra del Fuego and you’ll have the opportunity to enjoy presentations from your expert expedition team about the surrounding area’s geography, environment and wildlife. As you retrace Darwin’s journey through the Beagle Channel, look up to see seabirds hovering overhead – even maybe Andean condors – while surrounded by dramatic vistas of jagged-peaked mountains and massive tidewater glaciers. Make your way through so-called Glacier Alley, where the glaciers take their names from the first European countries to explore here. The Pia Glacier, in Alberto de Agostini National Park, extends from the soaring mountaintops down into the sea and it’s possible to take a short hike to a lookout point for unforgettable views. You can explore this area by Zodiac, including a beautiful glacial waterfall and nearby Garibaldi Glacier, surrounded by pristine sub-Antarctic forests.

Located at the end of a tranquil lagoon surrounded by lush forests in Agostini Sound, Dainelli Glacier is a unique sight – it appears to flow over rolling hills rather than mountains. Cruising aboard a Zodiac toward the blue-tinged wall of ice, conditions permitting, you might just be humbled by the wonder of nature’s power. The plan is to venture ashore for an easy hike along the beach to get a more intensive look at the glacier and surrounding mountains.

Continuing north, navigate through a remote network of coastal fjords and channels, including time spent venturing out into the Pacific Ocean. Your expedition team will prepare for the upcoming adventures, helping you further understand the glacial systems as well as the flora and fauna that can be found in this part of Chile.

There are few, if any, stretches of coastline like this, and you’ll meander through a memorable maze of deep, windswept fjords, narrow channels and isolated bays as you make your way to the small port of Puerto Natales. Look out for imperial and king cormorants, South American terns, blacknecked swans and southern wigeons that frequent the fjord. Torres del Paine National Park is one of the most stunning wilderness areas in South America, and Puerto Natales is the gateway. Enjoy a full day of hiking tailored to your preferred activity level and stopping at lookouts in the park, followed by a traditional Patagonian barbecue in the afternoon. The next day, head to land again and visit a working Patagonian estancia. Here you’ll learn about sheep farming in this unique setting, where the ostrich-like rhea and guanacos live too. There’s no better way to finish the experience than with a lunch of barbecued lamb al palo (“on a stick”), before returning to the ship in the early evening.

Cruise the calm, crystal-clear waters of the Canal de las Montañas and soak in the views of an incredible series of waterfalls. They cascade down between the jagged peaks that rise up sharply on either side of the narrow channel, with glaciers – which can exceed elevations over 8,235 feet (2,510 metres) – spilling dramatically into the water along its length. The channel is an ideal place to put the Zodiacs in the water for more detailed exploring, or ashore for a hike to scenic viewpoints. If you’re feeling more adventurous, maybe treat yourself to an optional kayaking excursion – the chance to see the channel from a unique perspective.

Make your way to Tuckers Islets, a series of small islands and rocky outcrops in Almirantazgo Sound – a small fjord off the Strait of Magellan – that’s the perfect location for penguin viewing. Though there’s no landing allowed, a Zodiac excursion can take you very near a pebble beach to view a colony of 4,000-plus breeding Magellanic penguins. Named for Portuguese explorer Ferdinand Magellan, whose crew sighted the charming creatures in 1520 during the first circumnavigation of the globe, the species is native to the region. The sight of them in their burrows, lounging on the beach or waddling in and out of the water, is one you won’t forget. If you’re fortunate, you may also see Chilean skuas, Magellanic cormorants (rock shags), imperial cormorants (king shags), oystercatchers, kelp geese, or even dolphins.

Continue your exploration of Almirantazgo Sound with a planned landing at Ainsworth Bay, one of the most picturesque and pristine places in Patagonia. A protected part of Alberto de Agostini National Park, the bay is host to rich birdlife, so keep your eyes peeled as you cruise in the Zodiacs. There will be hiking options available for all fitness levels, and you’ll get panoramic views of Marinelli Glacier, Marinelli Fjord and the surrounding Darwin mountain range. There might also be the chance to witness a unique sight – the first recorded colony of blackbrowed albatross in inland waters, feeding mainly in fjords and channels.

Another excellent spot for glacier exploring in Almirantazgo Sound is Bahia Brookes (Brookes Bay), where, conditions permitting, you’ll head ashore by Zodiac. The bay offers lots of chances for a closer view of waterfalls and glaciers, including the calving North Brookes Glacier, all with the breath-taking backdrop of the towering Darwin mountain range. All around will be serene silence, until the powerful roar of ice breaking off and crashing into the frigid waters below. This is also a great location for viewing ice fall deposits, which form reconstituted glaciers, and kame (silt and sediment deposits).

In the middle of the Strait of Magellan, Marta Island is home to abundant birdlife and more than one thousand Patagonian sea lions. To protect the wildlife, shore landings are not possible here, but you can circumnavigate the island, giving you endless opportunities to observe and photograph the colony from a short distance away in the comfort of a Zodiac. Called lobos marinos (sea wolves) by local Chileans, these giant pinnipeds – males can weigh over 700 lb/320 kg – form a noisy group as each sea lion vies for a choice spot of coastline. As you cruise by, sightings of imperial cormorants, skuas, southern gulls, Antarctic pigeons, and if you’re lucky, dolphins are also possible.

After an adventurous two weeks of exploration, say goodbye to your expedition team and disembark in Punta Arenas, where you’ll be transferred to the airport for your flight to Santiago. Here you are welcome to continue on your own travels or connect to your homeward flights.