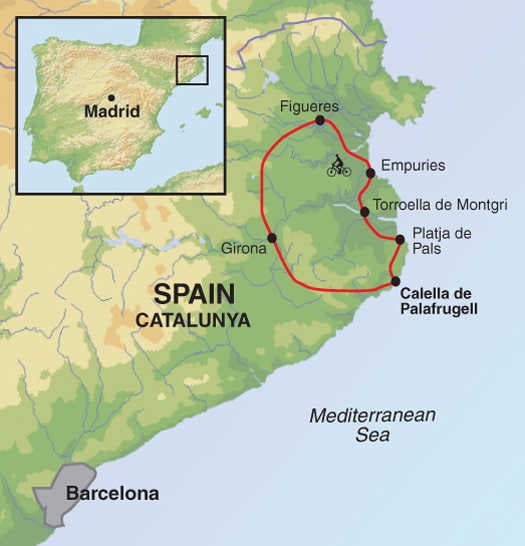 Arrive in Calella and head to the local 'blue flag' beaches or relax by the hotel pool before dinner. We provide plenty of recommendations in Calella for dinner. *(Staying at Hotel Garbi)*

Today's 'warm-up' ride takes you inland through Palafrugell, then on to Begur with its hilltop mediaeval castle remains and its colonial Cuban-influenced villas, built by locals who emigrated to Cuba and returned once they had made their fortunes. Visit the fabulous sweep of beach at Platja de Pals then continue on to Torroella de Montgri for two nights. *(Staying at Hotel Moli del Mig)*

Cycle into Torroella and explore the medieval centre and walls, originally the Royal Port for the Kings of Aragon, before the River Ter silted up and the port was moved to nearby L'Estartit. You could cycle here for some great beaches or walk up to the 13th century fortress, Montgri Castle, set on the top of the Montgri Massif, overlooking the town and the Emporda plain beyond. *(Staying at Hotel Moli del Mig)*

Follow flat country lanes to the coast at L'Escala and explore the ancient Greek and Roman Empuries ruins. The town was founded in 575 BC by Greek colonists, later occupied by the Romans, then abandoned in the Middle Ages due to its exposed coastal position leaving it open to attack. Cycle on to Castello d'Empuries, with its 1,000-year-old church, Santa Maria de Castello, before continuing on to Figueres. *(Staying at Hotel Pirineos)*

Explore Figueres today. Stroll along La Rambla and discover the old town's mediaeval squares and arches. As the birthplace of Salvador Dali, the Teatre-Museu Gala Salvador Dali, designed by the artist himself, is a must-see. Also visit the 18th century Sant Ferran Castle, a large military fortress (the largest monument in Catalonia), built with a pentagonal plan and sophisticated construction techniques for the time. *(Staying at Hotel Pirineos)*

Explore this stunning city, dating back to pre-Roman times. Walk the city walls for a different perspective of the sights: discover the Placa de la Independencia, the impressive cathedral, the Jewish Quarter and the Onyar River's picturesque bridges and painted houses. A regular fast train can take you to Barcelona for a day in the Catalan capital. Or cycle to Catalonia's largest natural lake 'Estany de Banyoles' the venue for 1992 Olympic rowing events. *(Staying at Hotel Ciutat de Girona)*

Ride out of Girona on the Via Verde, an old narrow-gauge railway line that heads, mostly downhill, all the way to the coast. Continue around the coast past Platja d'Aro and Calonge to the seafront town of Calella de Palafrugell. *(Staying at Hotel Garbi)*