With private transfers and guides at key sites, this one-week trip takes in the very best of the Mediterranean's largest island, Sicily. Visit a wealth of ancient historical sights, from Ancient Greek columns to beautiful Baroque towns. Take the chance to go up Europe's tallest active volcano, Mount Etna, and eat delicious arancini or seafood washed down by Italian wines. Agrigento - Visit Sicily's most famous Classical remains in the Valley of the Temples with its remarkable Doric architecture Villa Romana del Casale - See some of the best preserved and most extensive mosaics left in Europe at this Roman villa Why Not Extend Your Trip? - Combine this trip with our private 'Malta and Gozo Discovery' tour (trip code: PTMLA) to make a two week holiday to these varied Mediterranean islands 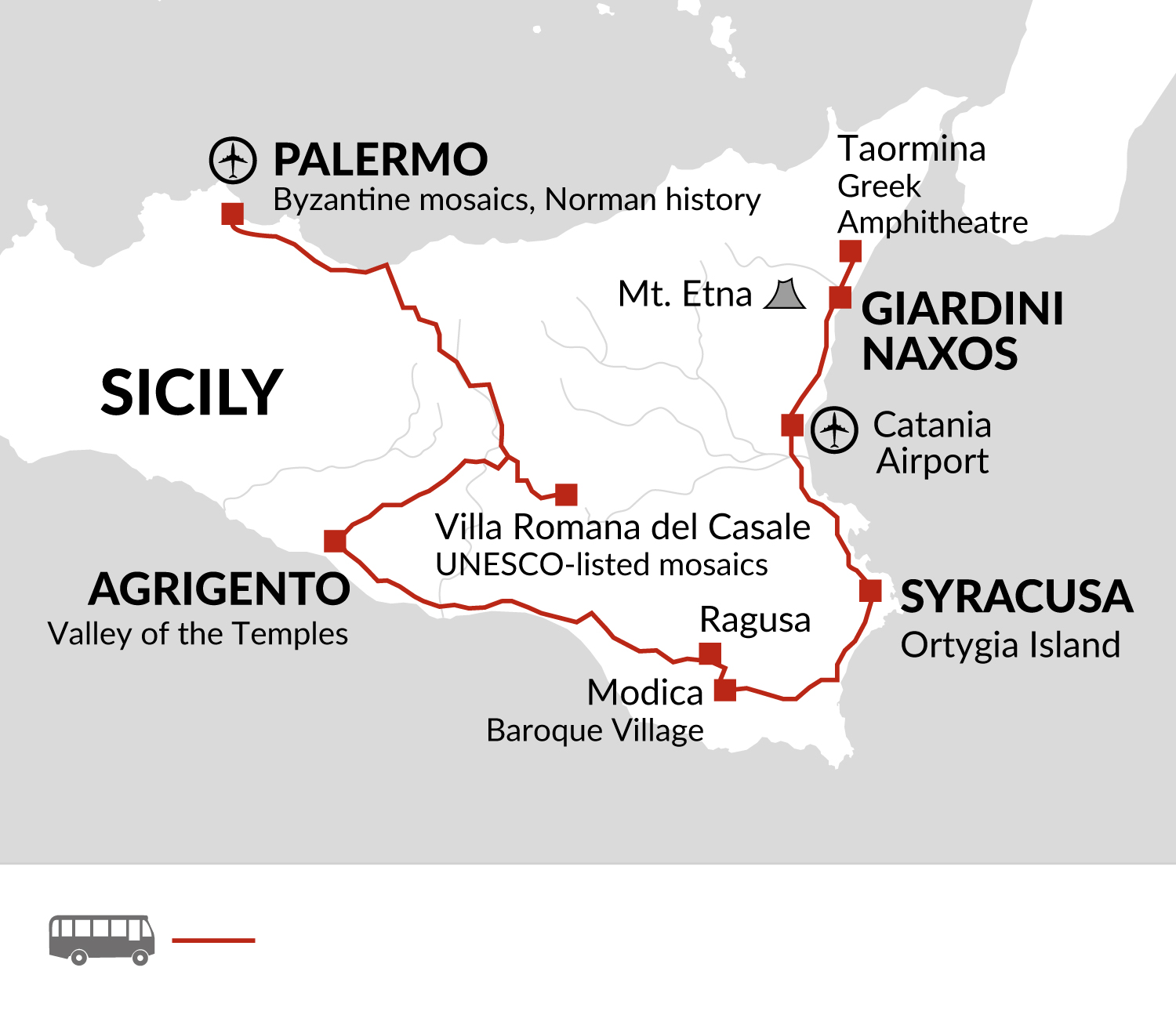 Arrive in Palermo, Sicily's capital with a rich mix of Greek, Roman, Islamic and Byzantine culture all merging into a fascinating mix of architecture and customs. You will be met on arrival at Palermo's Falcone-Borsellino International airport (airport code PMO), by an airport representative and a driver who will take you to your hotel, a 45 minute drive away. There are no activities planned today, so feel free to arrive in Palermo Airport at any time. For those booking their own flights, you will just need to let us know your flight details no later than three weeks prior to departure, in order to be met on arrival. If your flight arrives earlier in the day, perhaps you might choose to visit the Gothic Cathedral which was founded in 1185 by the Englishman, Walter of the Mill, and its extensive mosaics and beautiful cloisters. Tonight will be your first opportunity to sample Sicilian cuisine and wine. According to Greek legend the god Dionysus brought wine to Sicily, whereas it's more likely that wine has been produced here since ancient times due to the island being blessed with plenty of sunshine and reliably moderate rainfall, along with fertile volcanic soils. Nowadays there is a huge variety of both delicious red and white wines to choose from.

This morning you will get to experience some of Sicily's Norman history with a local guide. First on the agenda is a visit to the Palatine Chapel, which was the royal chapel of Sicily's Norman kings and is packed with spectacular Byzantine mosaics. Driving into the hills just a short distance out of the capital, visit the majestic Norman Cathedral of Monreale with your guide. Founded in 1174 by William the Good, the cathedral is also famous for its extensive mosaics, as well as its beautiful cloisters showing both Romanesque and Islamic influences. Returning to Sicily's capital, the afternoon is free to enjoy Palermo. The city stands at the foot of Monte Pellegrino, with the fertile valley of Concha d'Oro behind. It was one of the richest cities in Europe from the 9th to the 12th centuries AD when Islamic culture, Byzantine magnificence and medieval Europe were merging into a fascinating civilisation. Today, the city maintains a sense of cultural diversity and is famous for its art, music and food. You might like to visit Palermo's cathedral with its ornate facade, the grand Teatro Massimo opera house, the natural beauty of the Botanical Gardens or the extensive catacombs under the city, to name just a few of the attractions on offer. If you fancy a snack whilst exploring then you could try panelle, which is a popular street food. It's a fritter made from chickpeas eaten in a roll like a hot sandwich. If you fancy something sweet then cassata is Sicily's most famous cake, which is normally covered in marzipan and green icing over a moist fruity sponge layered with ricotta.

Leaving Palermo with a driver this morning, drive for a couple of hours inland to Piazza Amerina, a charming market town set amid rolling countryside. This isn't a town on the tourist trail and there may be some time to stroll along through the peaceful streets and picturesque squares, where the local men gather to discuss the events of the day and to put the world to rights, just as they have done for generations. Just a short hop from the town is the Villa Romana del Casale, which is easily visited without a guide. These ruins of a once-magnificent country mansion contain some incredibly well-preserved and beautiful Roman mosaics, such as the famed bikini girls, fishing cupids and hunting scenes featuring exotic wildlife like tigers, rhinos and elephants. The mosaics are UNESCO-Listed and spread over a remarkable 3,500 square metres. From here, drive on a further 1.5 hours to Agrigento, which was once one of the most prosperous cities in Sicily. This provides the base for an exploration of one of Sicily's most important classical sites, and certainly one of the most outstanding examples of Greek ancient architecture that exists outside of Greece - the Valley of the Temples.

A local guide will pick you up this morning for your drive out to the Valley of the Temples, this misleadingly-named site that stands overlooking a ridge just outside the town of Agrigento. Walk around the ruins of the largest Doric temple ever constructed - the Temple of Zeus. Standing next to this monumental structure you are only as tall as the first few entry steps and so you tend to feel very small staring up at the gigantic pillars above you. Explore the perfectly-proportioned Doric columns of the Temple of Concord, as well as the oldest temple in the complex, honouring Hercules. This impressive site is well worth the visit with an expert guide, who will add to your knowledge of Sicily's complex and fascinating history. In the afternoon, return to Agrigento and relax. If you have energy for exploring, you may wish to climb some of the steep, winding stairways of the city to the Duomo, or to the church of Santa Maria dei Greci. This church was built on a Greek temple, and you are still able to see some of the foundations of the original temple below - a reminder of just how much has been built in Sicily, covering many ancient Greek sites.

Depart Agrigento and drive west towards Syracusa, making a couple of scenic stops en route. Those familiar with the Italian TV series Inspector Montalbano will recognise some of the locations today as the aim is to stop at the Sicilian Baroque pearls of Modica and Ragusa. Modica, nestled at the foot of a deep gorge, is famous for its Aztec-inspired chocolate introduced during the Spanish rule of the island, and you may wish to make a visit to one of the towns many traditional chocolatiers during your unguided stop. The magnificent town of Ragusa is set atop a hill, and you'll also have some time here to explore the narrow alleyways, Baroque palaces and charming piazzas on foot. As with every other place in the region, the old town collapsed in the 1693 earthquake and a new town, Ragusa Superiore, was built on top of the hill. The oldest part of town, Ragusa Ibla, was rebuilt by the old aristocracy and the two towns were later joined to become the provincial capital. In the afternoon, arrive in Syracusa. During the Greek Classical period, this east coast city was the largest in the ancient world - even bigger than Athens. Now a UNESCO World Heritage Site, it is also notable as being the birthplace of antiquity's greatest mathematician, Archimedes. This evening, we recommend strolling 20-30 minutes to nearby Ortygia Island, which is a great place to sit and watch the world go by. This small island is the historical centre of the city and home to many landmarks such as the Fonte of Aretusa, Temple of Apollo ruins, Maniace Castle, and the narrow streets of the Jewish Quarter. Its limestone buildings and pretty harbour front make it an ideal place to sip coffee and enjoy a cake. Perhaps try cannolo, a traditional Sicilian dessert, a crisp shell filled with sweet ricotta and chocolate chips topped with candied fruits. If you prefer a savoury snack, then try arancini. These rice balls are stuffed with a range of fillings such as beef ragu and gooey cheese - delicious!

Explore Syracusa this morning with a local guide. The most important site is the Neapolis Archaeological Park with its famous Greek theatre hewn out of the hillside and the fine Roman amphitheatre where gladiators once fought. In the afternoon, drive to the small coastal town of Giardini Naxos. This sweet little fishing town sits in the shadow of Mount Etna and is the spot of the oldest Greek settlement in Sicily back in 735 BC. It's a great spot for relaxing beside the sea and tucking into fresh fish and some of the tastiest gelato in Italy. The hotel that we plan to use is in Giardini Naxos, but as this area along with Taormina are Sicily's most popular locations, rooms at this hotel may not always be available. If this is the case we will offer an alternative that will either be located in Giardini Naxos or Taormina. Each town is easily visited from the other on the hop-on public bus.

Today is completely at your leisure to relax and enjoy. If you'd like to take an excursion to Mount Etna, speak to your driver prior to arrival in Giardini Naxos on Day 6 and he will be able to help organise it along with our local supplier. The trip takes place with a combination of vehicle, cable car and a final 1,000m stretch of walking, which takes you up to 3,000 - currently the furthest possible for visitors. Alternatively, you might prefer to enjoy the coastal location of Giardini Naxos. There is an archaeological zone that doesn't feature a huge number of ruins but it does offer a very pleasant walk through the citrus groves. There is also a small museum here with some interesting findings from different historical periods. Taormina is also a popular day trip, with its ancient Greek Amphitheatre being high on the list of must-sees. The snow-capped Mount Etna acts as a spectacular backdrop to the remarkably preserved columned stage and it's easy to see why this is possibly the most famous view in all of Sicily and it makes for a superb photograph. You might also choose to visit the Villa Comunale Gardens which offer a peaceful escape from Taormina's bustling main street. Here you can walk amidst magnolia, hibiscus and bougainvillea trees.

Your trip ends today, and you will be taken to the airport to meet your international flight. There are no activities planned today, so you are free to depart from Catania Fontanarossa Airport (CTA) at any time - it's approximately one hour from the hotel. If your flight is departing later in the day, luggage storage facilities are available at our hotel.