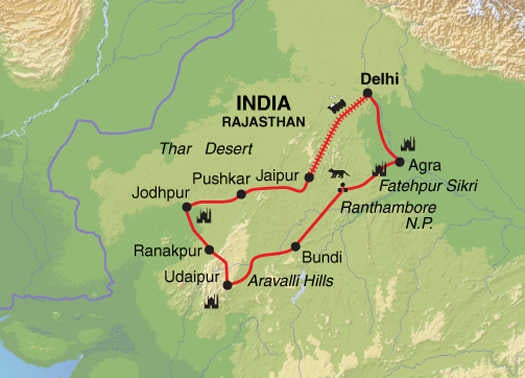 For those who are on the flight inclusive package we land in Delhi and transfer to the hotel. The rest of the day is free. Land only please make your way to our start hotel.   Your leader will leave details of your welcome meeting time in the hotel reception.  (Delhi sightseeing is on day 12) *Standard Hotel*

Transfer to Agra; afternoon visit to the Red Fort.

Today we will transfer to Agra (approx. 5 hrs drive) and in the afternoon visit the imposing Red Fort of Akbar, whose mighty sandstone walls enclose the beautiful white marble Pearl Mosque and the palaces, halls, courtyards and fountains of his sons and successors, Jehangir and Shah Jahan. *Standard Hotel*

Sunrise at the Taj Mahal; to Ranthambore N.P. via Fatehpur Sikri.

A very early start to see the incredible spectacle of the sunrise over the Taj Mahal. The Moghul Emperor Shah Jahan in memory of his beloved wife, Mumtaz Mahal, who died in 1631, built the beautiful white marble Taj Mahal. The Taj is serenely beautiful and never fails to amaze a first time visitor; the white marble exterior changes colour according to the position of the sun during the day and is matched by the rich interior detail. After our visit it's time to leave Agra and drive to Ranthambore National Park. On the way we visit Fatehpur Sikri which is the Emperor Akbar's deserted royal city. This impressive and well-preserved citadel became his capital in 1571, after the blessing of a local Moslem holy man correctly predicted the birth of a longed-for son, his successor the Emperor Jehangir. The mosque, designed to hold ten thousand worshippers, the palaces, residences and halls of audience are all made of decorative red sandstone. But this magnificence only lasted 14 years, as in 1584 Akbar left Fatehpur Sikri to secure his outlying territories, leaving this city much as we see it today - in perfect condition. This is another very full but rewarding day (approx. 7/8 hrs drive). *Standard Hotel*

Today is more relaxed as we take two game drives into Ranthambore National Park. The reserve was declared a wildlife sanctuary in 1957 and in 1974 became part of Project Tiger. Sadly, after initial success, poaching has drastically reduced the tiger population. However, Ranthambore is still considered one of the best places to spot tigers in the wild and many Exodus groups over the last few years have seen the elusive predator. Tiger aside, Ranthambore is also home to a great variety of wildlife such as several species of monkey, deer, crocodile, birdlife, and together with the scenery, make the visit well worth it. *Standard Hotel*

To Bundi nestled within the beautiful Aravalli Hills, with its picturesque
hillside lake; visit Bundi Fort.

Today we leave Ranthambore and drive to Bundi. Bundi is a delightful town, with a rustic setting, that stands on the foothills of the Azavali Mountains. Bundi is especially famous for its palaces and the beautifully decorated stepwells that back in the 15th and 18th century were used to collect water during the monsoon season. In the afternoon we visit the Bundi Fort, arguably one of the most beautiful palaces in India, home to outstanding miniature paintings portraying the history of the palace and its royal family. The fort is set high on a hill overlooking Bundi and its Krishna blue stonewashed houses. (Approx. 4 hrs drive) *Standard Hotel*

Today we set off on our 145 mile journey to Udaipur. Known as 'The Pearl of Rajasthan', the 'City of Sunrise' and 'Venice of the East', Udaipur is a beautiful place regarded by both Indians and travellers as the most romantic city in India. (Approx. 5 hrs drive) *Comfortable Hotel*

Full day to explore Udaipur including visiting the City Palace and Jagdish
Temple.

Situated on the east side of Lake Pichola, the main palace commands an unsurpassed view across the shimmering lake to the dusty Aravalli Hills with the luxurious Lake Palace hotel adding to the scene. Lake Pichola has two islands, each with a palace to rival that on the mainland; Jag Mandir and Jag Nivas (the latter is now the Lake Palace Hotel) rise out of their own reflections in the waters of the lake. Udaipur is surrounded by a massive bastion with five gates and dominating the town is the City Palace of the Maharana. The sumptuous apartments are decorated with multi-coloured mosaics, elaborate mirror work and inlaid tiles; half of these can be visited as the current Maharaja still occupies the rest of the palace. We spend the morning visiting the City Palace and Jagdish Temple, with a huge black stone image of Jagannath, an aspect of Lord Vishnu. If time allows it may be possible to visit the gardens of Gulab Bag or take a boat trip on the lake. The afternoon is free to enjoy this evocative city. *Comfortable Hotel*

To Jodhpur via Ranakpur and a visit to the Jain Temple.

Following the scenic road out of the beautiful lakeside town of Udaipur we head towards Jodhpur. On the way we stop and visit the stunning 15th Century Jain Temple at Ranakpur. The main temple, beautifully carved from marble, is dedicated to Adinath. It has 29 halls supported by 1444 pillars, each delicately carved with a different design. Jodhpur was founded by the Rajput chief Roa Jodha and was formerly the capital of the State of Marwar. The city is surrounded by an immense wall almost ten kilometres in circumference and is dominated by the massive fort that stands on a rocky hill commanding the surrounding desert. (Approx. 7 hrs drive) *Standard Hotel*

To the Hindu pilgrimage town of Pushkar.

First thing in the morning we will visit the magnificent Meherangarh Fort from where you will have a great view of the blue houses, painted to distinguish them as those of Brahmins. The fort itself looks massive from the outside but inside there is an impressive collection of finely carved sandstone screens and lattice windows, and the palaces themselves are very finely decorated. We then head to Pushkar, pilgrimage town and home to the annual Pushkar Camel Fair. Steeped in mysticism and surrounded by the desert this little town is a holy site on the fringes of a lake. This is a great place to relax and soak up the atmosphere. (Approx. 6 hrs drive) *Comfortable Hotel*

In the morning we do some sightseeing; in the centre of town is holy Pushkar lake surrounded by a number of temples including the famous Bramha temple said to be the only temple in the world dedicated to this deity. A dip in the waters of Pushkar Lake and worship at Bramha temple ensure salvation. In the afternoon we drive to Jaipur. (Approx. 3 hrs drive) *Standard Hotel*

Sightseeing in and around Jaipur; including the Amber Fort, Hawa Mahal, the
Observatory and City Palace.

A day of sightseeing. The 'Pink City' of Jaipur is one of the most attractive and colourful cities in India. Rajah Jai Singh decided to abandon his nearby fortress and palace at Amber in 1727 and laid out a planned city of broad avenues, built of sandstone and painted pink at a later stage. In the centre of Jaipur is the City Palace, formerly the residence of the Maharaja, it is now a fine museum containing rare manuscripts, paintings, royal garments and weapons. Close to the palace is one of the most intriguing sights of India, the observatory of Jai Singh. This is an assembly of immense astronomical instruments made of marble and brass set in a pleasant garden. We will also see Jaipur's impressive landmark, the Hawa Mahal, or Palace of the Winds. A few miles from the main city is the splendid Amber Palace, rising above a lake. The imposing hilltop fort contains large courtyards and interiors with fine decorations including inlaid alabaster panels and a Chamber of Mirrors. Jaipur is a centre of many handicrafts, such as durries (woven rugs), carpets, printed cloth, semi-precious stones, leatherwear etc.; it will be difficult to leave a workshop without buying anything! *Standard Hotel*

Today we take an early morning express train back to Delhi. (approx. 4 ½ hours). In the afternoon we visit the walled city of Old Delhi; crowded, full of activities and still influenced by the great Mughals who once ruled from the ramparts of the majestic Red Fort. We visit Jama Mosque - built in 17th century and the largest mosque in India and Rajghat - the memorial to Mahatma Gandhi. We will also see India Gate and the vast colonial buildings as we navigate around the city. Your tour leader will arrange a group dinner this evening if you would like to attend.  *Standard Hotel*

Those on the flight inclusive package will depart for London this morning for the daytime flight back to London; Land Only arrangements will finish after check-out from the hotel. **