For a tiny country, Costa Rica packs a huge wildlife punch. Containing 5% of the world's biodiversity, its thick forests teem with life, from brightly coloured toucans to slow-moving sloths. With adventure and beautiful beaches to boot, this private trip will not disappoint - you'll be travelling mainly privately, with some shared services in Tortuguero as you explore the canals and rivers. Tortuguero - Cruise the jungle waterways and explore the rainforest of this 'mini Amazon' Adventure - Whitewater raft, fly through the canopy on a zip wire or hike on volcanoes Papagayo - Discover stunning white-sand beaches, go diving or snorkelling off the Pacific Coast 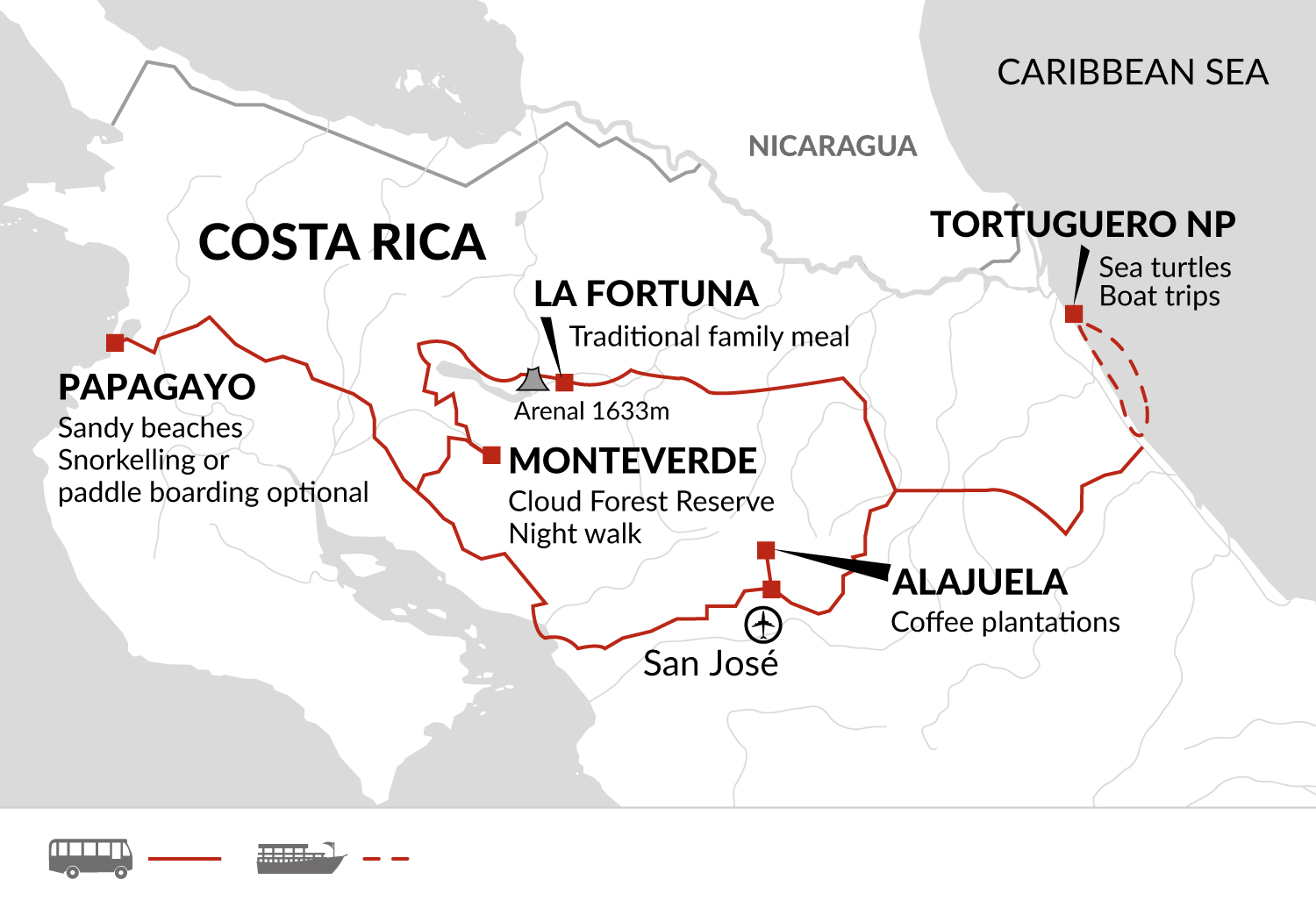 Arrive in San Jose. The cosmopolitan Costa Rican capital lies in a fertile valley at an altitude of 1150 metres. Coffee and sugar cane are big industries here and coffee is even planted between new buildings and along the roadside on the outskirts of the city. You will be met on arrival at San Jose's Juan Santamaria International Airport (SJO) by a local guide, and driven up into the foothills of coffee country, where the city gives out to a lush landscape of tropical plants, flowers and birds. It's a perfect way to start a trip in Costa Rica. The hotel is about 10km and 20 minutes away from the airport, and 25km, 45 minutes, away from the city of San Jose. There are no activities planned today, so feel free to arrive in San Jose at any time. For those booking their own flights, you will just need to let us know your flight details no later than three weeks prior to departure, in order to be met on arrival. The hotel for the evening has a pool and extensive grounds including its own coffee plantation. These can be explored on foot, and if you arrive into San Jose early we recommend spending the afternoon relaxing and getting over the jet lag here, taking in the impressive views over the city as day turns to night.

The wild waterways of Tortuguero National Park are your destination today. They can only be reached by boat, so you'll take a private car to Cano Blanco this morning, driving for approximately 2.5 hours through extensive banana plantations before picking up a boat and cruising to the spectacular lodge in Tortuguero. Travelling through a fascinating network of jungle waterways, it is easy to understand why this area is often described as a 'mini Amazon'. Its complex canal system and narrow lagoons link small isolated settlements and are rich in fish, including rainbow bass and grouper. They also support an abundance of birds, such as heron, stork and kingfisher as well as 60 species of mammal with howler and spider monkeys in the treetops. The lodge for the next two nights is idyllically situated, with its restaurant perched over one of the area's canals, and a swimming pool surrounded by forest. Rooms have fans and mosquito nets. All excursions while in Tortuguero are shared with other customers from the lodge.

To kick off the day, there is the option of a bird watching trip at dawn and a chance to spot some of Costa Rica's spectacular birdlife. Water birds such as herons, egrets and kingfishers are among the birds that may be spotted, although other species of birds such as toucans may be found in the area. Later this morning, go on a nature walk to understand more about the area's unique ecosystem, and this afternoon, take to the waterways for further exploration. This area is all about wildlife spotting, and the experienced guides will have their eyes out for all sorts of creatures - sloth, howler and capuchin monkey, caiman lizard, various species of toucan, red-eyed tree frog, as well as many other bird, butterfly and frog species, are all commonly sighted. Shyer species include the tapir, ocelot and the elusive jaguar. Throughout the year, you may be lucky enough to see different species of turtle nesting close to our lodge. The best time to see this spectacle is between June and September when over five-thousand green turtles come ashore to nest on Tortuguero's beaches. At this time of year, there is the option of an evening turtle walk in the company of experienced guides.

Leaving the lodge this morning, travel by boat back to Cano Blanco and pick up a private vehicle to Arenal. The drive skirts around the great central volcanic massif, passing through fertile farmlands, rich with tropical crops. After around two hours, catch sight of the famous Arenal Volcano. This classic cone, which rises to 1670 metres, is covered by a tangled mass of vegetation on one side, while the other is starkly barren. Having remained dormant for hundreds of years, it erupted unexpectedly in 1968, destroying the small towns of Tabacon and Pueblo Nuevo on its west side. After this, it was known for its regular explosions, which became a huge spectacle at night. However, since 2010, the volcano has gone quiet once more. The accommodation for the next two nights is in La Fortuna. The town was renamed after the 1968 eruption, when it was seen as being 'fortunate' that its location, on the volcano's eastern side, saved it from decimation. This afternoon is free to relax. Tonight's hotel (The Arenal Volcano Lodge and Spa) has its own natural thermal pools for you to enjoy, as well as a spa, cold-water swimming pools, and tropical botanical gardens with outstanding views of the Arenal Volcano.

This morning, explore the Arenal Volcano National Park. Take a walk on the flanks of the volcano with a local guide, and learn about the flora and fauna of the region as well as the science and history of the volcano. The afternoon is free to explore at your leisure. There are a host of activities on offer around Arenal, including the fantastic hanging bridges trail - almost two miles of high walkways, crossing nine fixed bridges and six suspension bridges, set within a 600 acre reserve of lush vegetation. Biking, horse-riding and zip wire courses are also available via the hotel.

Spend a full free day in Arenal, making the most of the magical wildlife and adventure that the area has to offer. The hotel can book any excursions that you wish, including whitewater rafting on class III-IV rapids on the Sarapiqui River, or a hike in the Rio Celeste National Park. Bird watching and wildlife spotting boat trips are also on offer, and no matter what your interests are, there is something for everyone. Tonight, set out with a local guide to spot some wildlife. You'll start in a small town called La Tigra, just 40 minutes from La Fortune, and take a trail into a small patch of rainforest in search of nocturnal species such as pacas, snakes and bats. The trail takes you around mirrored lakes towards a frog sanctuary, where you'll discover a large number of species including the dart frog and bull grog, as well as the photogenic red-eyed tree frog. After some exploration, you'll have a traditional meal with a family, cooked on a wood-burning stove - an opportunity to taste some of Costa Rica's excellent and underrated local food, such as plantain and gallo pinto (a rice and beans dish).

Travel around Arenal Lake up into the cloud forest region of Monteverde - one of the most well-known places in Costa Rica to see wildlife. The last part of the journey is on bumpy, unsealed roads as the car winds up into the cloud forest. Perched on the Continental Divide between the Pacific and the Caribbean, it is thought that there has been indigenous habitation in Monteverde since 3000 BC. However, the turning point in its recent history came in 1950, when a group of pacifist Quakers from Alabama moved here to avoid subscription in the Korean War. They sought a lifestyle in a country in which they could embrace their peaceful beliefs and continue to cultivate their dairy farms. These families went on to establish the community of Monteverde and some of its famed cloudforest reserves. The afternoon is free - you may like to head into the cloud forest reserve, or visit one of the areas many butterfly, hummingbird or orchid reserves.

This morning, head out with a guide into the Curicancha Nature Reserve. One of the best places in Monteverde to begin your wildlife adventure, this reserve restricts the number of visitors to 50 at once, meaning that during busy times of the year it is significantly quieter than the Monteverde Cloud Forest Reserve itself. The reserve is excellent for birding. Resplendant Quetzals are possible to see here, as well as many, many other species from trogons to hummingbirds. Around 250 species of bird have been spotted in the reserve, and part of the beauty of this reserve is that it has a variety of different habitats that attract diverse wildlife as well as a range of different tropical plants. Your guide will use their eagle-eyes to spot as many species as possible. It's quite amazing how they manage to see everything from the smallest frog to a toucan sitting high up in the canopy. The afternoon is free, and again there are a variety of different options here to take in the area's natural beauty. The hotel is able to help you organise any activities that you desire, from hanging bridges and zip wiring to hiking. You could also experience the practice of 'trapiche' - a term found throughout Central America and the Caribbean to mean the production of juice, sugar and sweets from pure sugar cane. It's a real tradition in Costa Rica, and will introduce you to some of the agricultural practices found here that many tourists miss on their bid to seek adventure and wildlife.

Drive in a private vehicle towards the Gulf of Papagayo on Costa Rica's Pacific Coast. This three hour drive takes us down from the cloud forest, descending to the sea with staggaring views across the plains of Guanacaste. Arriving around midday, you'll have two and a half days completely free by the beach to enjoy all that this beautiful coastline has to offer.

Today is free to relax at Papagayo. The hotel is located right on the edge of Playa Hermosa, and there are many other secluded beaches along the coastline that are just short taxi rides away. Ocean activites that your hotel can help you with include diving, snorkelling, paddle boarding and sunset sailing trips.

Take another day free in Papagayo. Choose to relax on the beach, or head inland for some adventure. Rafting and zip wiring is close by. Equally, take a trip to Rincon de la Vieja or Palo Verde National Parks - these parks are quite different, the former being a haven for volcano activity, boiling mud pools as well as great biodiversity. The latter has twelve different habitats, from saltwater marshland and swamp forest to mangroves - boat trips are the usual way to get around here, and the opportunities to spot wildlife are great.

Departing Papagayo this morning, drive 230km, approximately four hours, back to San Jose's Juan Santamaria International Airport (airport code SJO), where the trip ends. Your transfer is private and therefore flexible to suit your flights. However, due to the long drive, we don't recommend booking flights that depart earlier than 1pm.