Spend 15 glorious days exploring the myriad delights of the Dalmatian Coast in this cruise from Split to Dubrovnik. With a mix of photogenic shorelines, ancient cities and European elegance, Croatia is sure to impress even the most jaded traveller. From well-known highlights such as Split’s Old Town to the quiet charm of a winery in small Sibenik village, this trip is the perfect way to see guidebook favourites and little-known treasures alike. With its countless ports, coastal towns and clear waters, the Adriatic Coast is the perfect destination to explore on an Adventure Cruising tour. 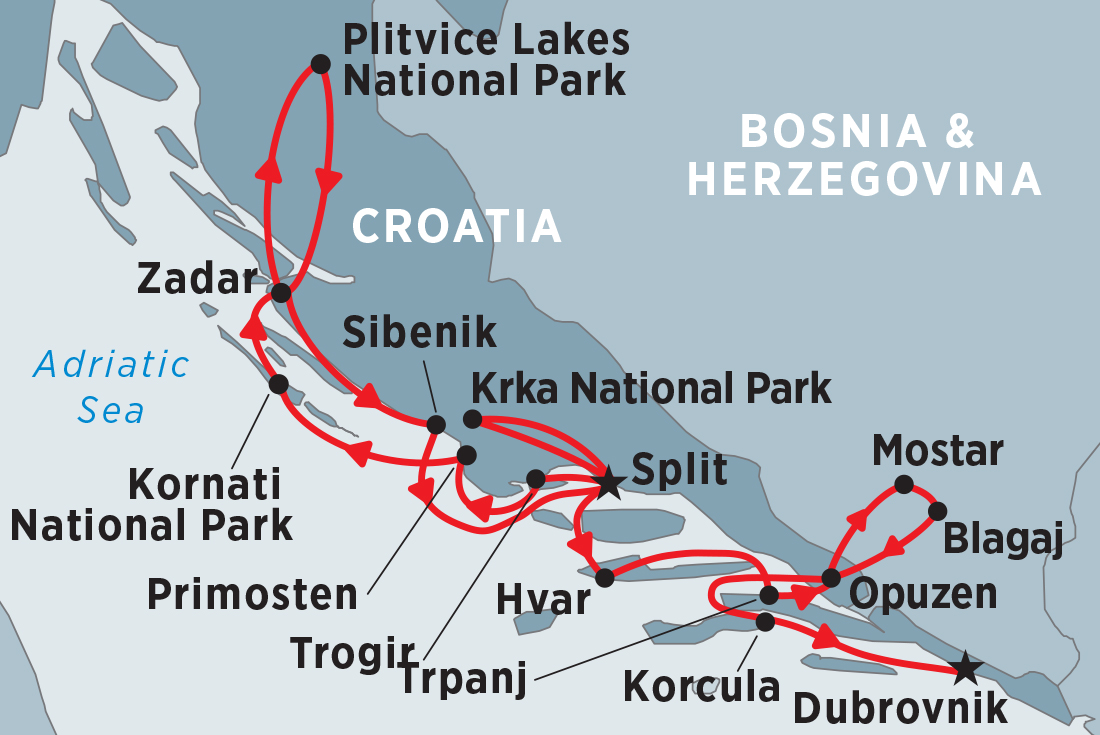 Welcome to Split, perhaps the most famous and beloved of all Croatia's coastal cities. Don't worry if you don't have a chance to see much today – we'll be back. Board the Peregrine Dalmatian at 5 pm and meet your fellow travellers for a welcome meeting and drink. In the evening, enjoy dinner on board and get to know your companions and leader a little better.

Sail to Sibenik, take a short orientation walk with your leader, then a transfer to a nearby village. Here you are treated to a traditional Dalmatian lunch in an agriturismo. This particular spot is famous for its smoked ham, known in the to the locals as prsut. You visit the farm, as well as and one of the finest wineries in Croatia for a wine tasting before returning to Sibenik in early evening. Note that these activities will take place in smaller groups, so the order of lunch and the winery visit may be vice versa.

Travel to Zadar – the oldest continuously inhabited city in Croatia – and take a walking tour with a local guide. This includes admittance to St Donatus Church, an imposing ninth-century building still used for musical performances. Later in the afternoon, head to the Sea Organ, which generates music via waves using tubes placed beneath a set of broad marble stairs. As darkness falls, enjoy a glass of sparkling wine at nearby Greeting to the Sun, an in-ground monument consisting of 300 multi-layered glass plates in a 22-metre (72 foot) circle that produces a stunning show of light after dark. It works in tandem with the Sea Organ – one communicates with light, the other with sound.

Transfer by coach to Plitvice National Park, where a leisurely hike with your leader is a lovely way to take in all the natural beauty. While you can't swim in these lakes, the experience of nature is a profound one, with waterfalls and butterflies piercing the ambience of the lush green forest, providing many a photo opportunity. Return to Zadar in the afternoon and spend the night at port, enjoying dinner on board.

Sail to Kornati National Park, a nautical wonderland made up of 89 islands. Explore the bays and islands using the on-board kayaks, take a dip in clear waters, or sit back and take in the endless blue-green vistas with a drink in hand. Stay overnight in Telascica, a bay on Dugi Otok.

Set sail early to historic Trogir. Enjoy breakfast on board and a swim stop en route. On arrival, get acquainted with the beautiful town on a leader-led orientation walk. Visit the Cathedral of St Lawrence, one of Croatia's finest architectural pieces, and then the 15th-century Kamerlengo fortress. Sit down to some lunch on board the ship before sailing to Primosten. Enjoy a free evening in this picturesque town. Maybe spend time tasting some of the output of the region’s famous vineyards.

After breakfast on board, stop at Ciovo Island for a swim (if weather and time permits) before sailing back to Split. Take a guided walking tour on arrival. Located in the heart of this Mediterranean paradise is Diocletian’s Palace – erected in the fourth century, this white-walled fortress is a city within a city. In the evening, sit down to a captain's dinner on board.

Your day is as clear as the waters of the Adriatic Sea, so spend your time as you wish in gorgeous Split. Maybe take a relaxing stroll along the palm-lined Riva Harbour. This evening welcome some new travellers to your group at a dinner on board the Peregrine Dalmatia.

After a leisurely breakfast on board, you may wish to join the new travellers on another guided tour of Split. Or perhaps strike out on your own and lunch at your leisure in one of the Old Town's lovely al fresco eateries. In the afternoon, take a private bus transfer to Krka National Park. Board a small boat to explore this stunning environment. Witness the park's many waterfalls, many of which feature multi-tiered falls gushing from verdant forest. You may wish to stop for a dip or two in the clear, crisp waters. Return by bus to Split and enjoy dinner on board the ship.

Set sail for the island of Hvar, enjoying breakfast on board. Stop to swim at a secluded beach off the coast and continue to Stari Grad – one of Europe's oldest towns and one of Hvar's prettiest. Enjoy lunch with an incredible views of the historic town from the deck. Disembark and hop on a bus to explore Hvar and discover why it is sometimes called the 'Queen of the Dalmatian Islands'. Visit a local honey farm and taste some of this sweet specialty before taking a stroll through vibrant purple lavender fields. Continue to Hvar Town and explore this small but glamorous city on a leader-guided walk before returning to the comparatively quiet Stari Grad for the evening.

Depart early for Opuzen, enjoying breakfast on board and a mid-morning swim stop in turquoise waters. Set sail up the River Neretva, taking in the sight of the steep cliffs that rise on either side of the fjord and lunching while you go. On arrival, hop in a small wooden boat for a leisurely cruise through the surrounding wetlands, enjoying some local snacks and music while you glide through the water. Alight at a beautiful local restaurant that looks over the water and savour the rich flavours of Peka lamb and other local dishes. Spend the evening in Opuzen as you wish. Perhaps venture out to one of the friendly bars around the town square to meet the locals over a beer or two.

Make an early start this morning and transfer to Mostar in Bosnia and Herzegovina by minibus. Take a guided walk through the charming town, visiting a workshop specialising in traditional coffee sets and copper wall carvings. Enjoy some free time to explore the town and snap some photos of the iconic arched bridge of Stari Most. Return to the ship in the early afternoon and set sail for Trpanj. Alight and transfer to the Matusko Winery for a tour of the evergreen vineyard and a wine tasting. This evening enjoy a barbecue on the deck of the vessel.

Depart for Korcula, enjoying breakfast on board and a mid-morning swim stop in clear waters off the coast of Loviste. Once in Korcula, get acquainted with the idyllic streets during a guided walk and then explore at your own pace. Perhaps continue your stroll through the narrow alleyways of the marvellously-preserved Old Town or run your hands over the rough-hewn walls and towers that were built to protect Korcula in the 13th and 14th century. Ask your leader for dinner recommendations, and don’t forget to sample some of the famous local white wines.

Leave early this morning and cruise to Dubrovnik, stopping mid-morning for a swim near the island of Jakljan. Take your lunch on board before arriving in the early afternoon. Dubrovnik features the terracotta rooves, ancient cliff-built walls and crystal coasts that most people associate with the Dalmatian Coast. Board a local bus (accompanied by your leader) to the Old City, where you can spend the afternoon exploring independently. Return to the ship in the evening and enjoy a four-course dinner with the captain and your travelling companions.

Your Adventure Cruising tour along the Dalmatian Coast ends after breakfast. Should you require a transfer to Dubrovnik Airport, please enquire with your travel consultant prior to departure or your leader during your trip.