Discover the beaches, Mayan temples and colourful villages of the Yucatan Peninsula by bike. After Cozumel Island we visit the colonial towns of Merida and Valladolid and cycle through colourful Mayan villages on quiet roads with chances to swim from beautiful beaches. Finally we explore Tulum and relax. Chichen Itza, Coba and Tulum - Explore amazing Mayan sites Easy Yucatan cycling - Pedal on quiet back roads on the flat Swim - From idyllic white sand beaches and in freshwater cenotes 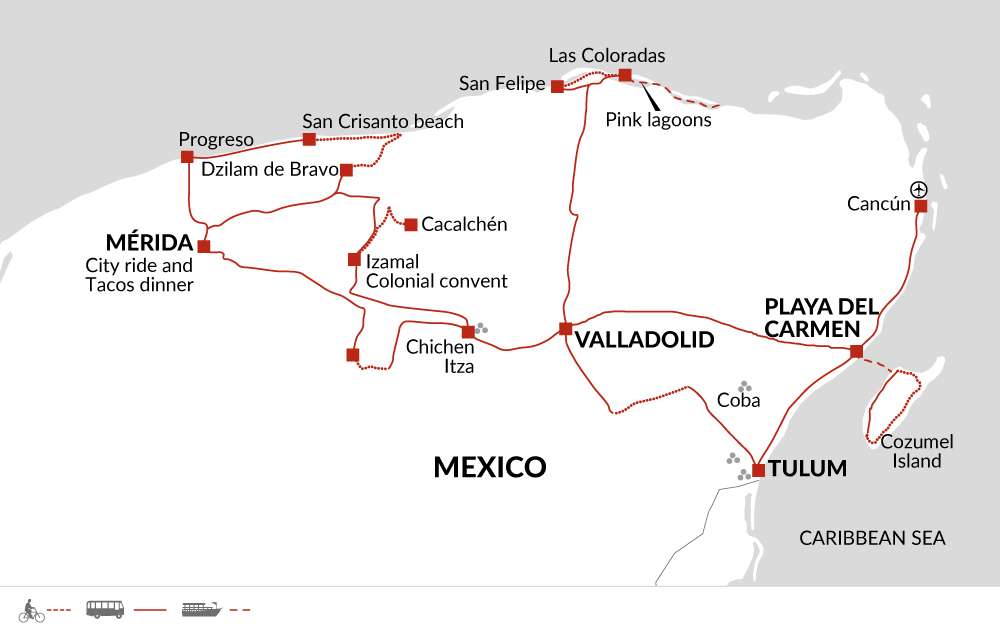 Our journey begins in Playa del Carmen. Located on the northeast coast of the Yucatan Peninsula, Playa del Carmen is a coastal resort town known for coral reefs and palm-fringed beaches. There is a good range of international flight options into nearby Cancun. The Tour Leader plans to meet you in the hotel reception at 7.30pm for the welcome meeting followed by the chance to go out for dinner for those interested. There are no other activities planned today, so you are free to arrive at any time. If you would like to receive a complimentary airport transfer today, you will need to arrive into Cancún International Airport (CUN), which is 45 minutes away. Should you miss the welcome meeting, your Leader will inform you of any essential information as soon as you catch up.

This morning we catch a ferry for the short journey across to Cozumel Island where we start today's ride. Each year the island hosts an 'iron man' event and we plan to cycle a similar route at a much more sedate pace! You will have time firstly to familiarise yourself with your bike and make any necessary adjustments. Once everybody is comfortable we will start our route, with the first 15km on paved road as we cross the island from west to east where we will try to stop for a fresh coconut water at a bar on the beach. We cycle with the sea by our side as we make our way down the island. Our final kilometres brings us to the Bob Marley bar and museum where we can relax in hammocks and have a swim. We return to the ferry port by vehicle with the option to cycle if timings and daylight allow. Our total cycling distance today is approximately 40 kilometres (flat, paved roads) with an optional additional 30 km.

Early this morning we leave Playa del Carmen and drive inland (2 hours) to Chichen Itza. Founded in AD432 and conquered by the Toltecs in the 10th century, the culture of the Maya and the Toltec gradually fused. Chichen Itza is one of the most outstanding archaeological sites in the Americas and we visit the site with a local guide before enjoying some free time to explore further. Founded in AD432 the city is believed to have reached its zenith during the Terminal Classic Period (800-1000AD) and remarkable sculptures adorn the pyramids, palaces, temples and ball court (where death was the penalty for defeat). We drive a short distance to Ik Kill Cenote where we have free time to enjoy a refreshing swim and lunch (not included). Cenotes are natural pools formed in limestone and used by the ancient Mayan culture as a source of fresh water. Finally we drive (1.5hrs) to Merida and commence our introduction by bike on a 10km cycle around the city. Please note that depending on arrival time and sunset hours, it may be better to move this ride to the early morning of day 5 - your tour leader will advise. Famed for its beautiful Spanish-Moorish style architecture, Merida was founded in 1542 by Francisco de Montejo and the city was built over the ruins of a Mayan city. Trade with Europe during the Spanish colonial rule brought the city great wealth that is now reflected in the many grand mansions, churches and plazas that lend the city a faded elegance and more of a European feel than elsewhere in Mexico. Merida is now the capital of the state of Yucatan and is also known as the 'White City'. Our total cycling distance today is approximately 10 kilometres (flat, paved roads).

We start the day with a drive to Dzilam Bravo that should take around 1.5 hours. En route we plan to stop at Dzilam Gonzalez to see an unrestored archeological site in the main square. Today's cycle ride takes us up to the Yucatan north coast as we ride alongside the Caribbean, past small fishing villages until we reach the palm-fringed sands of San Crisanto Beach. You may like to have a dip in the sea before we help in the preparation of our seafood lunch, including shrimp ceviche and fish. While at the beach you will also be able to learn a little about some of the exotic local drinks and your Tour Leader will show how to make drinks such as Michelada, Chelada or Red Eyes. Later this afternoon we return to Merida by bus. At night we visit a local house or local restaurant to try a typical food and local experience called Taquisa (Tacos party). Our total cycling distance today is approximately 30 kilometres (flat, paved roads).

This morning we bid farewell to Merida with a short early drive to Tixpehual where we start today's cycle. Depending on arrival time and sunset on day 2 we may have a early morning dawn ride around Merida this morning before breakfast. We ride through several interesting little villages to Ake. We finish cycling here and drive to the colonial backwater of Izamal. Following the Spanish conquest a colonial city was founded atop what was an important Mayan ceremonial site which became a focal point of the Spanish attempts to convert locals to Catholicism dominated by a 16th century Franciscan Monastery. After exploring the site we try local dishes such as salbutes, panuchos and empanadas for lunch. In the afternoon there may be time to see the local handicraft workshops (if open) before we drive (1.5hrs) to colonial Valladolid where we spend the next two nights. Our total cycling distance today is approximately 25 kilometres (flat, paved and dirt roads).

We leave early today with a drive (2 hrs) north to the coastal town of Rio Lagartos where we start our ride. Our ride ends near the little village of Las Coloradas home to the remarkable pink lagoons where locals harvest massive quantities of sea salt. The colours derive from specific unicellular algae called 'dunaliella salina' that has pink and red pigments. This algae is the base of nutrition for birds such as flamingos and spoonbill herons and is usually found in places with large concentrations of salt. From here a short drive brings us to a secluded beach where you have a chance to swim. Another short drive takes us to the fisherman's village of Rio Lagartos for a seafood lunch (not included) (vegetarian options available). We then take to the waters for a short boat excursion seeking out local birdlife. Finally we plan to learn all about tequila and you will have a chance to try some before returning by bus to our hotel in Valladolid. In the case of bad weather the Tour Leader may need to alter today's itinerary. Our total cycling distance today is approximately 35 kilometres (flat, paved roads and compacted sand paths).

We bid farewell to Valladolid this morning as we head east to the Caribbean coast. First we drive (1hr) to Xiulub village where we start our cycle ride via small interesting villages on a secluded road amidst thick vegetation to the Mayan ruins of Coba. On our unguided visit of Coba you will have the chance to ascend the tallest Mayan temple in the region for panoramic views. After lunch (not included) we continue by bus to our hotel in Tulum. Our total cycling distance today is approximately 35 kilometres (flat, paved roads).

After breakfast we visit the Mayan site of Tulum with a local guide. The ruins of Tulum enjoy a dramatic setting perched atop a cliff overlooking the turquoise waters and white sand beach below. The city was guarded by a watch tower and thick ramparts which reflect the late Mayan period that Tulum dates back to, when there was increasingly enmity between Mayan city-states. The rest of the day is left free and you may choose to kick back and relax on the beaches of Tulum or even revisit the ruins to see them in a different light. There is also the option to visit Punta Laguna Natural Reserve.

The trip ends after breakfast at our hotel in Tulum. There are no activities planned today, so you are free to depart at any time. If your flight is departing later in the day luggage storage facilities are available at our hotel. If you would like to receive a complimentary airport transfer today, you need to depart from Cancún International Airport (CUN), which is a 1.5 to 2 hour drive away.