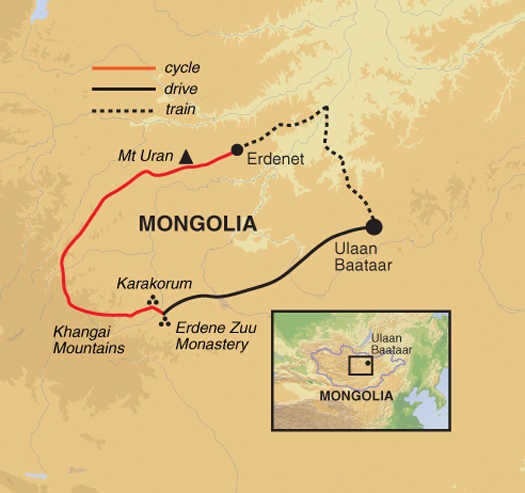 Arrive in Ulaanbaatar, transfer to the group hotel. Those not on the group flights will meet the group at the hotel. Bayangol Hotel or similar, Comfortable Hotel

This morning we start the day after breakfast with the trip briefing and then strike out on an introductory tour of Ulaanbaatar, including Sukhbaatar Square and Gandan Monastery. In the afternoon/evening, we enjoy a performance of traditional Mongolian song and dance by the world famous Tumen Ekh Troupe before boarding the overnight train to Erdenet in the early evening. Erdenet being Mongolia's third largest city and home to one of the largest copper mines in the world. Overnight in comfortable sleeping compartments on the train.Sleeper Train

Ride to Tal Tolgoi Well via the small township of Bugat; camp.

Our train arrives early in the morning. Upon arrival we will be joined by our crew and support vehicles. After breakfast, we set up the bikes and head out towards the wilderness. The small township of Bugat makes a convenient lunch stop. After lunch, our route takes us over Chuluutiin Davaa, a long pass on which care must be taken as the surface is loose in parts. With a steep descent, we arrive at a long plain leading to tonight's camp near Tal Tolgoi Well. Cycle approx. 50km.Wild Camping

After our first night near local herding families, we cycle through undulating country before descending to a bridge over the Altaan (Golden) River. Rock formations in the area hint towards a volcanic past. The riverbanks make an idyllic spot for a picnic lunch. It is a long steady climb to Tuluugiin Pass where the scenery changes dramatically as the forests give way to open steppe, at least for a while. Today is our longest cycling day on the trip. Cycle approx 70km.Wild Camping

Today we pass through rolling hills, past small lakes and herds of horses. Steppe eagles can be seen in this area. We stop for lunch with views across the steppe. After lunch we continue on tracks around the southern side of Mt Khairkhan (1862m) and make camp in an open green valley beneath Kholbooriin pass (1649m). Cycle approx. 60km.Wild Camping

The day begins with a bit of exertion as we make the short climb in the morning up to the pass, giving us far-reaching views across the countryside. Down the other side we wind along gentle river valleys before emerging at the township of Khairkhan. After lunch on the outskirts of town we pass a series of small lakes before choosing a camp for the night. Cycle approx. 50km.Wild Camping

Cycle up Khunjiin River Valley to camp beneath Mt. Chingeltei.

Today we follow the Khunjiin River as it rises gently towards its headwaters. River valleys like this provide fertile pasture for grazing livestock and are popular campsites with local herders. Wetlands near the river attract birdlife, including demoiselle crane. Overnight in the upper reaches of the river valley, beneath Mt Chingeltei. Cycle approx. 60kmWild Camping

Short climb past the headwaters of the Khunjiin; descend into Tamir River
Valley; camp near Great Rock of Ikh Tamir.

After a short climb to the headwaters of Khunjiin River at Uran Khutul pass, it is downhill to the Tamir River where we have lunch on the banks. Near the river we will pass burial grounds dating back to 8th Century AD. We camp tonight on the banks of the Tamir, not far from Ikh Tamir, or 'Great Rock'. Locals say that if you can throw a rock over the rock, it will bring you good luck for the rest of the journey. Cycle approx. 60km.Wild Camping

Today is a half-day and we make a good start to make the most of the afternoon for a chance to rest. Gurviin Dava Pass is a long but steady ascent through forest for the most part, with a short steep climb at the end. Arriving at the provincial capital of Tsetserleg makes the effort well worthwhile. Tsetserleg means 'garden' and this township has one of the most attractive settings of any in Mongolia, nestled in a cul-de-sac of mountains. We pitch camp by the Tsetserleg River. The afternoon is free to relax, enjoy a hot shower and experience staying in a traditional Mongolian ger. Cycle approx. 45km.Ger Camp

Morning ride in foothills of the Khangai Mountains.

We are now close to the Khangai Mountains and a short ride takes us to the foothills. The rolling country of Arhangai has been replaced by forested hills of larch and pine with dramatic alpine peaks in the distance. There are three short passes today, with lunch on the third before descending to tonight's camp. Ride approx. 50km.Wild Camping

Our route now takes us into the heart of the Khangai Mountains, following well-marked 4WD trails. Herders still inhabit the valleys, yet yaks have replaced cows as the milk-producing animals. We follow picturesque valleys and camp beneath Mt Ondor Khairkhan (2312m). A relatively long day that can be challenging if conditions are windy.Cycle approx. 60km.Wild Camping

Today we cross the Khangai Mountain range on good jeep tracks and drop down to the Orkhon River on the longest, smoothest descent of the journey. This Orkhon River flows to the ancient capital, Karakorum, then on to Lake Baikal in Russia and further northwards to the Artic Ocean. After lunch we continue downstream to our overnight camp on the river banks. Overnight camp by the Orkhon River. Cycle approx 50km.Wild Camping

We ride out from camp following undulating terrain, crossing and recrossing the Orkhon River as we make a beeline for the fertile plain chosen by Genghis Khan as the location for the capital city of his empire. 'Karakorum' is derived from a Turkic language and means black rock, and shares this name with mountains in Pakistan. Arriving in the ancient capital in the early afternoon, we check into the Karakorum ger camp for hot showers and a well-earned rest. This afternoon we head out to explore Erdene Zuu Monastery, the largest and most famous monastery in Mongolia. Built in 1586 under the direction of Abtai Khan on the ruins of the ancient capital, much of the monastery was destroyed during Stalinist purges of the 1930's, but an impressive wall with 108 stupas and a number of temples still remain. We spend the night in traditional Mongolian gers.Cycle approx. 35km.Ger Camp

We make a good start this morning for the 400km drive back to Ulaanbaatar. Travelling at an easy pace, we stop at the Mongol Els to view the sand dunes. Picnic lunch along the way. Check into our hotel on arrival in Ulaanbaatar - hot showers and cold beers!Bayangol Hotel or Similar, Comfortable Hotel

Those on the group flights will be taken to the airport early for their flight back. For other travellers the trip ends after breakfast.