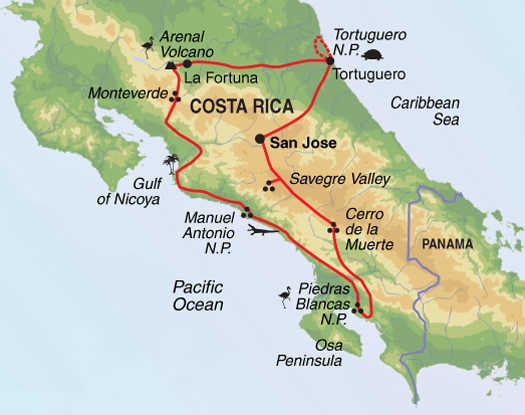 The group flight usually arrives into San Jose this evening. Land Only clients should aim to arrive at the hotel this afternoon/evening. Free transfers are available for all clients. This evening is the perfect opportunity to meet your guide and get to know your fellow travellers. Accommodation: Presidente Hotel (or similar)Comfortable Hotel

Our adventure begins early this morning, leaving San Jose behind as we travel to the north-east of Costa Rica to Tortuguero National Park. Accessible only by boat or light aircraft, Tortuguero's vast network of waterways, canals and swamps is remarkably tranquil, unspoilt and devoid of noise pollution. On reaching the pier we board a small motorboat for the one hour fifteen minute journey to our lodge, which is nestled on a small strip of land between the Caribbean Sea and the main lagoon. Our afternoon is spent in Tortuguero village, where it’s possible to visit the Sea Turtle Museum (a donation will be requested at the entrance). Tortuguero is probably most famous as a nesting site for the endangered Green turtle, which can be seen arriving onto the beach to lay eggs from late July to October (as part of an optional excursion). Hawksbill, Loggerhead and Giant Leatherback turtles also nest in this region, and during November to January baby turtles start to hatch and make their way towards the ocean. Today's travel time will be in the region of six hours including a break for breakfast. Accommodation: Laguna Lodge (or similar)Comfortable Hotel

An early morning boat trip enables us to discover the extraordinary flora and fauna of Tortuguero, passing serenely along the waterways. At this time of day wildlife is usually at its most active, and with the help of our expert guide we are likely to encounter monkeys, caiman, iguanas, butterflies and many of the 300+ bird species recorded here. We return to the lodge for a hearty breakfast by the river. The lodge is a tranquil spot to relax this afternoon if you want to take some time out to enjoy the facilities, or alternatively you can join a second boat trip or follow a short walking trail through the forest. Accommodation: Laguna Lodge (or similar)Comfortable Hotel

To La Fortuna, near Arenal Volcano.

We leave Tortuguero the same way we arrived by taking a small boat to the pier. Our bus will be at the pier waiting to drive us to the region of Arenal, passing huge banana, pineapple and sugar cane plantations on the way. Arenal was Costa Rica's most active volcano until fairly recently when it entered a resting phase, and can no longer be seen spitting ash, smoke or lava. However there is still a lot of geothermal activity in the area and you'll have the opportunity to visit one of the excellent hot springs this evening. In clear weather there are great views of the volcano from our overnight base in the nearby town of La Fortuna. Today's travelling time is around five and a half hours including a lunch stop. Accommodation: Arenal Montechiari, Arenal Paraiso or Arenal Manoa (or similar)Comfortable Hotel

Waterfalls are abundant in the region of Arenal and this morning we visit La Fortuna Waterfall, a 65 metre cascade of water plunging into an emerald pool below. A short trail through the rainforest brings us to a relatively steep set of steps that we must descend to reach the waterfall and then ascend to the exit - the hike/climb takes around 20-30 minutes and is within the capabilities of anyone with reasonable fitness. Reward your efforts with a dip in one of the natural pools punctuating the foliage to cool off! Alternatively you could visit the lookout point and wait for the group. After lunch we take a short scenic hike within Arenal National Park, walking through secondary rainforest and passing some of the lava fields from past eruptions. The high vantage points on this walk allow great views overlooking Lake Arenal, and the birdlife is plentiful. Accommodation: Arenal Montechiari, Arenal Paraiso or Arenal Manoa (or similar)Comfortable Hotel

To Monteverde in the Tilaran Mountains.

From Arenal we travel to the Tilaran Mountain Range in the Central Highlands for our first taste of a Costa Rican cloud forest. The journey provides breathtaking views of the Gulf of Nicoya and the islands below as we ascend the hills towards Monteverde, a forest-cloaked region whose name literally means 'Green Mountain'. The high altitude supports a complex eco-system where plants thrive, particularly orchids of which there are some 400+ different varieties here. Today's drive is around four hours — the last 40km of road is gravel and can be bumpy, particularly following heavy rain. Accommodation: Monteverde Cloud Forest Lodge or Ficus Hotel (or similar)Comfortable Hotel

This morning we have a guided walk in Santa Elena Cloud Forest Reserve, one of the first community-managed reserves in Costa Rica and an area that is world-famous for its biodiversity. To this day the reserve is managed by the Santa Elena High School with funds channelled into protecting the reserve and providing environmental education classes within the local community. Thanks to its high elevation, Santa Elena is bathed in thick misty clouds which support a huge range of flowers, ferns, mosses, vines and orchids. Birdlife thrives in the cloud forest with over 425 species recorded here. Santa Elena is also one of the best places to spot noisy Howler monkeys swinging through the trees! In the afternoon it's possible to join an optional coffee tour to learn about the importance of this crop to the socio-economic development of the country, or join a canopy tour to get a different view of the forest. Accommodation: Monteverde Cloud Forest Lodge or Ficus Hotel (or similar)Comfortable Hotel

Our journey takes a south-easterly turn today as we follow the Pan-Am Highway along the coastline to Manuel Antonio, passing African oil palm and teak plantations on the way. Manuel Antonio National Park consists of a vast marine reserve as well as 1,700 acres of mangrove swamp, primary and secondary rainforest. The forest vegetation stretches as far as the high-tide line and provides a stunning backdrop to the expansive sandy beaches, forested islands and dramatic rocky headlands. Our drive to Manuel Antonio takes around four hours. We spend the next two nights here, normally in a hotel close to the beach and the entrance of the national park. Depending on our time of arrival we should have some time to enjoy various optional activities this afternoon or enjoy the hotels facilities. Accommodation: Villa Bosque Hotel or Espadilla Hotel (or similar)Comfortable Hotel

A guided tour of Manuel Antonio National Park this morning should enable us to have some close wildlife encounters. White-faced Capuchin monkeys play in the trees and are frequently sighted on the beaches, whilst noisy Howler monkeys are usually heard moving through the trees and calling to each other before they are seen. The endangered Titi monkey (Squirrel monkey) are fewer in number but can sometimes be spotted in this area. Iguanas, agouti and two and three toed sloths are also commonly sighted in the national park. Manuel Antonio's beaches are considered to be some of the most beautiful in the country and we have all afternoon to enjoy them or try one of the optional activities available in this region. Please note that Manuel Antonio National Park is closed on Mondays. If your visit falls on a Monday, the timing of this activity will be adjusted so that you visit the park on the previous day, and today will be at leisure to enjoy the many optional excursions of the region. Accommodation: Villa Bosque Hotel or Espadilla Hotel (or similar)Comfortable Hotel

Travel four hours south towards Golfito, a relatively wild and undiscovered region. The dense jungle here has hardly been explored or researched. The next two nights are spent in the beautiful Esquinas Rainforest Lodge set in the heart of primary rainforest and bordered by the newly created Piedras Blancas National Park and Golfito Nature Reserve. The lodge was originally financed by the government of Austria as a project combining forest research, development aid and nature conservation. Most employees are local and profits are used to help with projects in the nearby village. This afternoon we discover our peaceful surroundings and search for the abundant bird and insect life that resides here. Accommodation: Esquinas Rainforest Lodge (or similar)Comfortable Hotel

Hike through the rainforest this morning with your guide and experience all of the sights and sounds of the jungle. During this activity we are likely to see snakes, monkeys and maybe sloths. This hike can be quite slippery after rainfall but is a real highlight and well worth the effort. This afternoon has been left free for optional activities — delve deeper into the forest on a 10 mile network of trails departing directly from the lodge, or simply relax by the pool. Accommodation: Esquinas Rainforest Lodge (or similar)Comfortable Hotel

Our journey takes a north-westerly turn through San Isidro and up and over the Cerro de la Muerte mountain range to our next destination, the Savegre Valley, located around four and a half hours away from Golfito. The cloud forest of Savegre is said to be one of the best places in the whole of Costa Rica to see the beautiful, colourful and notoriously shy Resplendent Quetzal and we have two nights here to discover the region. These endangered birds rely on the cloud forest for their habitat — the males in particular are striking with a green crest, red breast and tail feathers that can reach a metre in length. A good pair of binoculars will be helpful for quetzal spotting as these birds camouflage themselves well amongst the wet leaves of the forest! After lunch we take a short walk from our lodge into the cloud forest. Accommodation: Savegre Hotel, Nature Reserve & Spa or Trogon Lodge (or similar)Comfortable Hotel

Today is free to relax and explore Savegre Valley. Bring your binoculars to spot some of the 170 bird species, trek through the tropical cloud forest or simply enjoy the incredible view from the lodge. Your leader will suggest walks for today so that you can discover the tropical cloud forest and sub-Andean vegetation of the area.  Accommodation: Savegre Hotel, Nature Reserve & Spa or Trogon Lodge (or similar)Comfortable Hotel

Visit the village of Copey; to San Jose.

Visit the village of Copey this morning to step momentarily into the agricultural lives of those living in the highlands of the Central Mountain Range. We take a short walk to the picturesque village where some snacks will be prepared for us with a local family, which is sure to be a memorable touch of Costa Rican hospitality! A two and a half hour journey takes us back to San Jose, where there is time to explore the modern capital. Accommodation: Presidente Hotel (or similar)Comfortable Hotel

The trip comes to an end today after breakfast and it's time to bid Costa Rica and the rest of the group goodbye. Free transfers to San Jose airport are available to all clients today.