Easter Island’s most famous attraction is the moai statues, enormous head-and-torso blocks carved from the stone of the Rano Raraku volcano. At least 288 moai once stood on massive stone platforms around the perimeter of the island. Another 600 are scattered across the island. At four metres high and weighing more than 80 tons, it’s estimated that between 50 and 150 people were needed to drag them across the countryside. Independent Experiences Independent travel, without the stress. Peregrine’s Independent Experiences are a range of short ‘mini tours’ that you can add to other Experiences or as an extension to a longer tour, to craft your perfect holiday itinerary. Independent Experiences are for 1-3 travellers, come accompanied by a local Peregrine guide and depart daily. 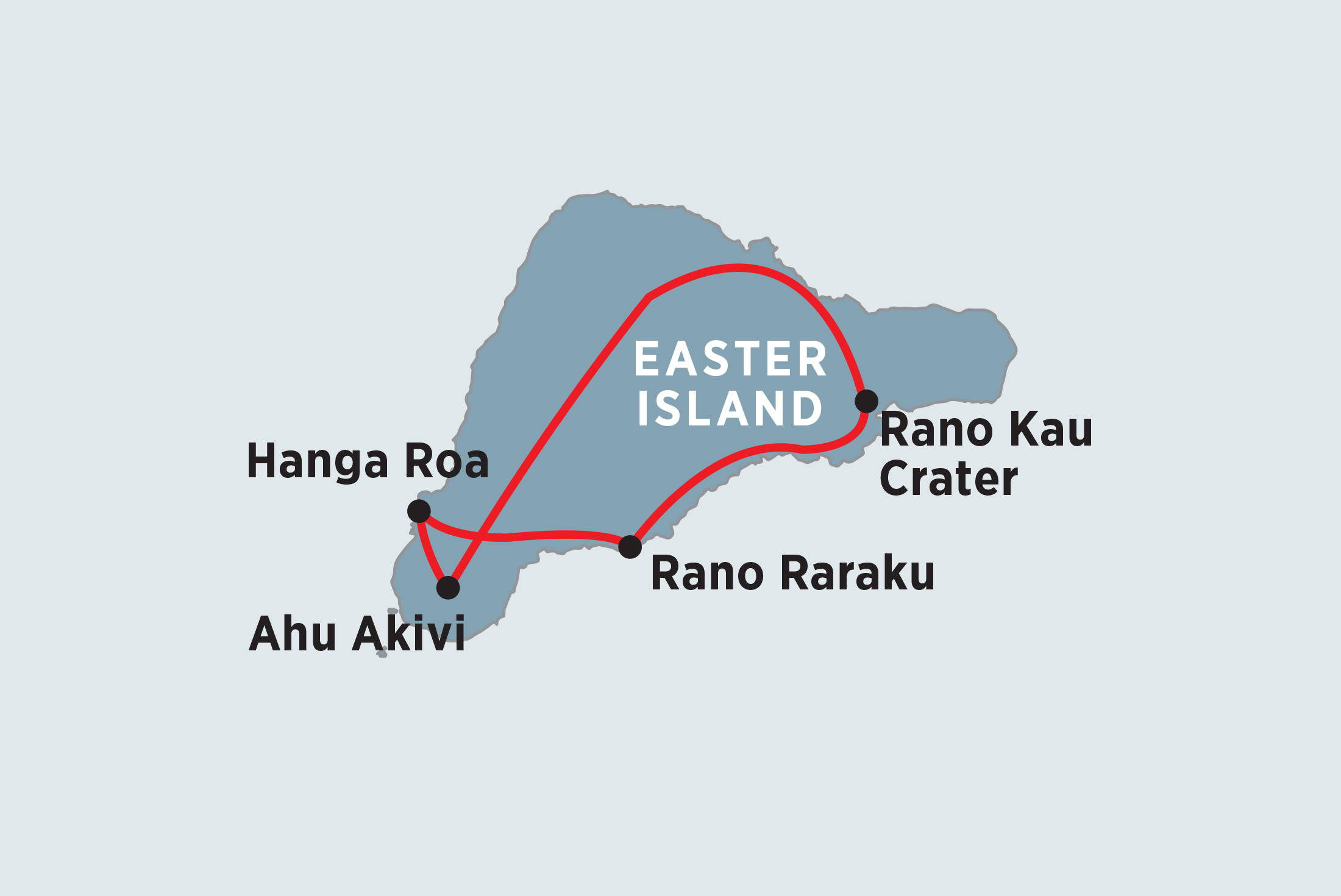 On arrival at Easter Island's Mataveri Airport you will be welcomed and transferred to your hotel in Hanga Roa, the island's main town. Please look for a person at the airport holding up a sign with your name on it. Once you have checked into the hotel the remainder of your first day will be free. Hanga Roa is a small place with 3800 inhabitants, but has excellent facilities such as banks, shops, restaurants and bars. At the port in the middle of town you will be immediately greeted by your first moai - Ahu Tautira. There is much to see and do if free time is available. To the north of town are some scenic spots complete with more moai, as well as the Sebastian Englebert Museum of Anthropology - a good place to get acquainted with the Easter Island story.

After breakfast you will join other travellers on a guided excursion around Easter Island. The island covers an area of 117 square kilometres, so it is quite manageable to see most of the island in a day. You'll leave Hanga Roa and travel along the south coast to Ahu Vaihu, where you will see eight large toppled moai lying face down on the ground. You'll then continue to Rano Raraku, a large volcano also known as 'the nursery of the moai' because the statues around the island were cut from the stones that came from this quarry. Around this area can be found a 21 metre high moai - the largest one ever carved. At Ahu Tongariro, you will be faced with the impressive sight of 15 restored moai right on the coastline. The originals were destroyed by a huge tidal wave in 1960. Along the north coast is Anakena - a beautiful sandy beach with swaying palm trees. However, as with many significant spots on Easter Island, there is a moai nearby standing guard in its own inimitable fashion.

In the morning you will join other travellers on a visit to Orongo Ceremonial Village, which is set in a dramatic location 400 metres high on a ridge with the ocean on one side and the crater lake of Rano Kau on the other. It contains remnants of art relating to a birdman cult that has been around on the island for centuries. Nearby are a few moai at Ahu Vinapu. In the afternoon you will travel to Akivi and view the seven moai that overlook the site of an ancient village and out west towards the setting sun.

Your Independent Experience will come to an end today after breakfast. You will be transferred to the airport for your onward flight. Please ensure we are advised of your flight details when booking your Easter Island Experience.