An unforgettable ride through some of Vietnam’s most famous cities and countryside. 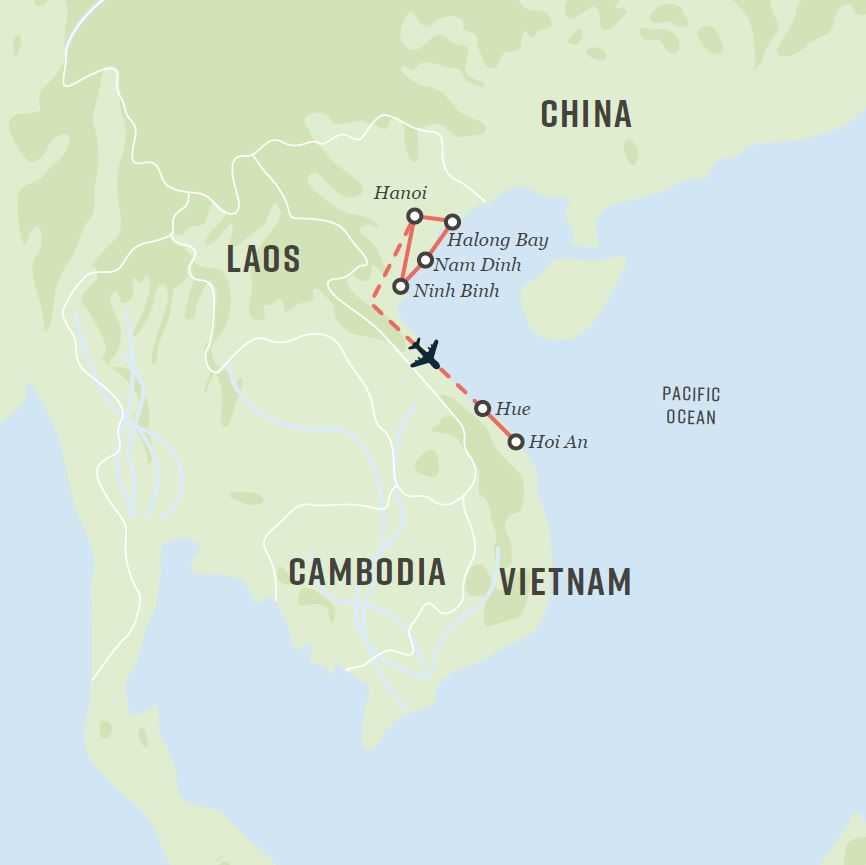 You’ll arrive in the capital of Vietnam, Hanoi. We love this busy and full-on place, where scooters precariously weave their way through narrow streets to a continual soundtrack of honking horns.Tonight, you’ll get to know your group at KOTO (Know One, Teach One). This training restaurant for disadvantaged youths serves excellent food and you’ll have the opportunity to try some local flavours as well as dishes from wider south-east Asia.

At dawn, you’ll head to Hoan Kiem Lake for a Tai Chi and Laughing Yoga session. Feeling revitalised, you’ll feast on pho, a Vietnamese soup, for breakfast. Next, there’s a walk around the labyrinth streets of Hanoi’s Old Quarter, stopping to sample egg coffee. There’s bun cha for lunch, a local dish of noodles, broth and meat served alongside some greens.After lunch, you’ll pick up bikes before cycling to Ho Tay, the city’s largest lake, to bike 15 miles around its circumference.  The ride provides a glimpse into modern and traditional Vietnamese life as fishermen wait for a catch and luxury rooftop restaurants compete for space. You’ll stop at one of the many cafes to sip on delicious Vietnamese coffee and enjoy the lakeside views.Dinner tonight is at Tam Vi, a restaurant serving traditional northern cuisine. Then it’s on to a popular cocktail bar, Mojito Bar & Lounge, to try their legendary pho cocktail.

Bike it to Ninh Binh

Today you’ll leave Hanoi behind, heading an hour-or-so outside of the city to Cho Tia railway station. You’ll cycle through pagoda and temple-filled villages, then join the riverside path beside the Chau Giang River and Day River, one of the four longest rivers in North Vietnam. Today’s 43-mile ride finishes at Thanh Nghi, where a bus transfers you to the hotel in Ninh Binh.

After breakfast, you’ll cycle from the hotel to Trang An in Ninh Binh province for a boating adventure. You’ll spend over two hours journeying through the spectacular scenery along the Sao Khe River, exploring the intriguing limestone caves (and understanding why this area has been granted UNESCO Heritage status).Afterwards, it’s back in the saddle to cycle along the Day River, following its banks to Hai Hau in Nam Dinh. There’s a stop along the way to visit the covered bridge, Pham Phao Church, and a locally celebrated chap who makes beautiful brass instruments.With another 40 miles under your belt today, it’s back to Nam Dinh for a rest.

There’s an exhilarating two-hour ride to start the day, cycling 25 miles from the hotel to Thai Binh before a bus takes you to idyllic Halong Bay. Easily one of the most beautiful sights in south-east Asia, Halong Bay is a captivating place where 3000-odd limestone peaks rise directly from the emerald sea. You’ll cruise amongst this phenomenal karst scenery, stopping to swim and kayak, allowing you to explore places inaccessible by your cruise boat. You’ll sleep onboard overnight in twin-share cabins with en suite facilities.Please be aware that the boat trip on Halong Bay can be subject to short notice change if certain adverse weather conditions develop during your trip.

After returning to port, you’ll transfer to Noi Bai airport to board the short flight to Hue. There’ll be time to refresh in the hotel before dinner at a local home where you’ll help prepare the evening meal and chat to your host about Vietnamese life.Afterwards, you’ll head back to the centre of Hue to experience its colourful nightlife.

Often considered the cultural and historical centre of Vietnam, there is plenty to see in Hue and a full day of activities lies ahead. You’ll take a morning tour of the city and surrounding tombs, including a visit to the Imperial City of Hue. Although much was lost in the French and American wars, the city is undergoing restoration and reconstruction. It’s a fascinating place to visit and admire the atmospheric emperor’s residence, temples and palaces.After, you’ll explore the Perfume River by boat, passing the renowned Thien Mu Pagoda, an imposing Buddhist temple sitting on a hill.  Further on, set among beautiful riverside gardens, lies the Tomb of Tu Doc, an expansive and elaborate royal mausoleum.Lunch is served at the Peaceful Bamboo Village, a centre that provides vocational training for young people with disabilities.  Later in the afternoon, you’ll take a cyclo around Hue for a street food experience. You’ll sample an array of food including Banh Beo, water fern cakes, Bun Bo Hue, a spicy broth and noodles, and salty coffee.

Cycle to sensational Hoi An

The calories from yesterday’s food fest will serve you well today as you embark on a 52-mile ride. Leaving Hue, you’ll cycle uphill, conquering the Ocean Cloud Pass, a stretch of highway that winds through the Truong Son mountain range with views across the Bay of Da Nang to the south. There will be plenty of breaks along the way to enjoy the scenery before you reach the atmospheric town of Hoi An with its lantern-lit streets, vibrant markets and artisan shops.After dinner, you’ll recover from the long cycle by sipping the best craft beer in town at a local small brewery.

This morning there’s a guided walking tour of Hoi An to explore the historical sights of the Old Town. Alternatively, you can cycle to Cua Dai beach for some downtime, or bike further afield to the Marble Mountains.In the afternoon, you’ll cycle 15 miles to Tra Que Village, famed for its avenues of herbs, so fragrant that you can smell them before you see them. You’ll stop at a Cao Lau noodle maker, a bean sprout grower’s home and the local market. En route you should see water buffaloes and wonderful birdlife. Later, you’ll visit a chef’s house where there’s a cooking demonstration before having a go yourself, learning all about central Vietnamese cuisine, this time.

After breakfast, you’ll part with your faithful bike, ready to return home (and rest your weary legs!).