Scale North Africa’s highest peak on a long weekend like no other. 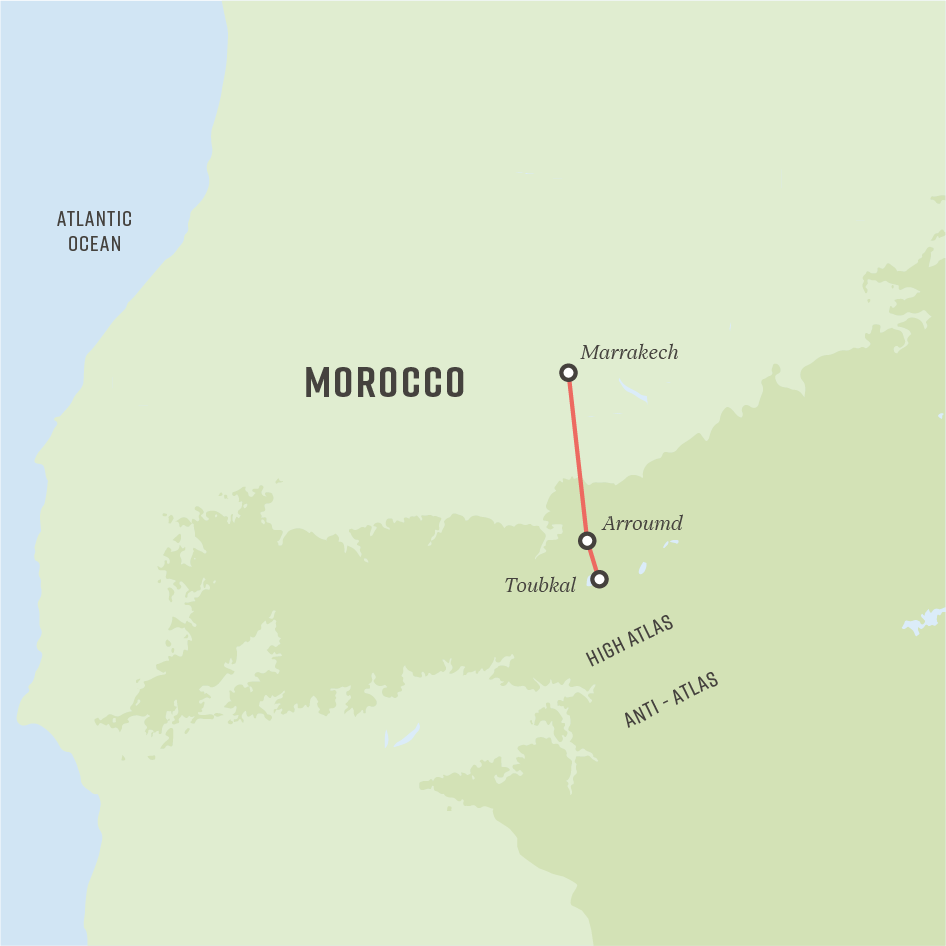 Make your own flight arrangements to Marrakech

Welcome to enchanting Marrakech, a cornucopia of heritage, faith and culture. Make sure you book a flight that arrives before 5 pm, so you have time to join the welcome meeting and meet your fellow climbers. Rest easy in the Boutique Bab hotel tonight, ready for tomorrow’s climb.

Brace yourself. The adventure begins…

After breakfast, you’ll leave the city hubbub behind. Today you’ll venture into the Atlas Mountains and start to climb Mount Toubkal, North Africa’s highest peak. You’ll drive to Imlil first, a gathering point for mountaineers, before setting off on foot for around an hour to reach Arroumd for lunch. After some essential carb-loading, you’ll follow winding mule tracks for another five hours. As you climb, the scenery gets seriously impressive, and you’ll pass through Berber communities and learn about their way of life. There’s a short stop at the shrine of Marabout of Sidi Chamharouch for some cultural insight (and a well-deserved breather). Then you’ll continue to Toubkal Base Camp Refuge for some much-needed sustenance and as much sleep as you can manage at a lofty 3,207m.

You’ll start at 4 am this morning (early by anyone’s standards), clambering over rocky paths as vegetation thins out with the ever-increasing altitude. There are long sections of scree, and the climb becomes challenging because of the loose rock.  Once you pass the 4,000m point, there are magnificent panoramic views across the valleys and lower summits of the High Atlas Range. The feeling of achievement you’ll get at the top is monumental. To the north, you’ll see the fertile plains of the Magreb and Marrakech, and to the south, the wild landscape of the pre-Sahara.  After savouring that victorious feeling for a moment longer (and testing that panorama feature on your camera phone), it’s time for the descent. Eventually, you’ll be met by a transfer bus to whisk you to Gite Armed in Arroumd for a celebratory evening in this traditional guest house.

Soothe away muscle fatigue in a traditional Hammam

After a well-deserved lie-in and a leisurely breakfast, you’ll return to Marrakech for a genuine Moroccan experience: a hammam. It’s a traditional ritual in these parts, consisting of steaming and scrubbing the body to feel renewed. Just what the doctor ordered after that gruelling climb.The rest of the day is yours to explore the city at your own pace. Then you can choose to meet your group for a final rooftop dinner at Nomad, a restaurant that serves a wide range of fresh local produce.Tonight, you’ll rest your head back at Bab Hotel.

Start planning your next conquest…

After breakfast at the hotel, it’s a short transfer to the airport for your journey home.