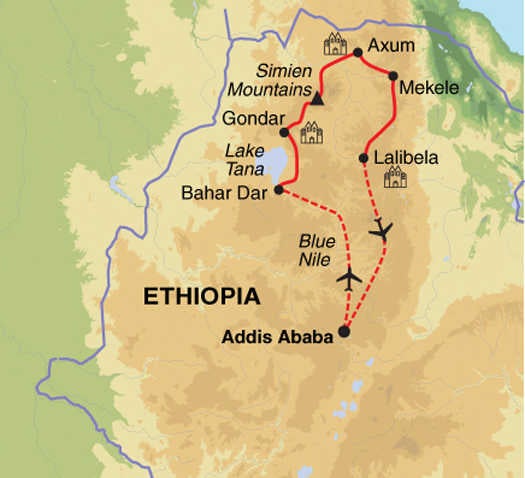 Early morning arrival in Addis. Please note that if you are being picked up at the airport (either on the group transfer or private transfer) you will have to exit the terminal to find our representative with the Exodus board. You may see people with signs inside the terminal but they are generally people with special permission such as the UN, Government or hotels with desks inside the terminal. After a leisurely morning to relax we will spend the afternoon on a site-seeing tour of Addis Ababa. We will visit the National Museum which houses some of the country’s historic treasures. The collection of fossils and bones of early hominids discovered in Ethiopia include the 3.5 million year old remains of ‘Lucy’, the oldest hominid every found. We will also visit the Holy Trinity Church, Ethiopia’s main cathedral and home to the remains of the last emperor, Haile Selassie. Finally we will visit Menelik’s Mausoleum.Magnolia Hotel or similar

Today we will take a spectacular flight to Bahar Dar. From the air we can gaze across the extraordinary nature of the Ethiopian Plateau, repeatedly cut by immensely deep gorges. Bahar Dar is a small but fast growing town on the southern shore of Lake Tana, the source of the Blue Nile. It has long attracted religious men and the area contains numerous churches and monasteries, many of them on the thirty or so islands of Lake Tana. The afternoon is free to enjoy the fantastic bird-watching around the lake or head into Bahar Dar itself and explore its local market. There is also the option of doing a half day excursion to the Blue Nile Falls (usually in the morning). Tana Hotel or similar

We have a full day boat trip on Lake Tana to visit the monasteries of Narga Selassie & URA Kidane Mehret. We’ll travel by boat to visit some of the more remote monasteries and churches, most of which date back to the thirteenth century. The monasteries are fascinating and unlike any others outside Ethiopia, often decorated with bright mural painting. Because of their isolation they were used to store art treasures and religious relics from all over the country. Local history says the Ark of the Covenant was kept on one of these islands when the city of Axum was under threat, and the remains of five emperors are to be found at Daga Istafanos.Tana Hotel or similar

Drive to Gondar; visit the castles, Fasilides' bathhouse and the church's
ceiling.

This morning we drive north to Gondar, the former capital of Ethiopia. Arriving in Gondar we will stop by the Kindu Trust, a local organisation which works with disadvantaged children, their families and communities. After lunch we will explore Gondar and visit the castles, which were built in the 17th and 18th century by several generations of Ethiopian kings. Nearby is Debre Birhan Selassie church with its sensational angelic ceiling, and the bathhouse of Fasilides where thousands of Ethiopians celebrate Timkat festival every January. Our hotel is up on a cliff top with wonderful views looking over the town. Goha Hotel or similar

Drive to Simien Mountains; afternoon hike along the plateau.

After breakfast we drive to Debark on the edge of the Simien Mountains. The road has considerably improved and the drive should take about 2hrs. In the late morning we drive up into the mountains for some spectacular views of this unique ecosystem. The highland plateau is capped by a dramatic skyline of jagged volcanic plugs and split by deep gorges and gullies. On a good day, the views are sensational and the striking towers and formations have been described as the 'chess pieces of the Gods'. We take an optional 2hr walk, mostly flat or downhill, and hope to see the endemic Gelada baboons and Klipspringers before returning to Debark. The maximum altitude we reach is 3250m.Simien Park Hotel or similar

Continue on a full day's drive to the fabled city of Axum via the lowlands of the Simien Mountains and Tekeze River gorge. Though this is a long journey, the spectacular views make time slide away. Arrive in the late afternoon.Yared Zema Hotel or similar

Full day visiting the ancient capital of the Axumite Kingdom.

Axum is the seat of the ancient capital of the Kingdom of Axum, which was once one of the most powerful in the ancient world. Located at the centre of the trading routes between the Mediterranean and India, and the great port of Adulis on the Red Sea, it was economically, politically and technically advanced and at times had control over both sides of the Red Sea. Axum is also the origin of Christianity in Ethiopia and believed to be the resting place of the Ark of the Covenant. The old church of St Mary of Zion was the first church to be built in Sub-Saharan Africa around 330AD. Its ruins can be seen in the precinct of the church compound. We visit the famous monolithic stelae of Axum, the tallest one still standing reaches over 21 metres and the greatest one of them all, once 34 metres high now lies toppled on the ground. It is still, however, the largest monolith ever erected by man. The subterranean tombs, stone inscriptions of ancient Axumite kings and the small archaeological museum are also living witness of the ancient Axumite history. We will also visit the ruined palace of the Queen of Sheba who is said to have given birth to Menelik the First, fathered by King Solomon, the founder of Ethiopia's ruling family until the late Emperor Haile Selassie.Yared Zema Hotel or similar

We leave for Wukro visiting some of the rock hewn churches of Eastern Tigrai on the way. We first pass through the Battle field of Adwa, where the Ethiopians defeated the Italian colonial army in 1896, and then stop to visit the 500 B.C. pre-Christian Temple of Yeha. We will have lunch at Adigrat and proceed on to Wukro. En route we visit the beautiful rock-hewn church of Medhane-Alem Adi Kesho in Tsaeda Imba. Overnight stay at Wukro. Fiseha Hotel or similar

Visit Wukro's rock-hewn churches and on to Mekele.

This morning we start by driving about 20Kms North West of Wukro to visit the famous rock-hewn church of Abreha Wo Atsebeha and Wukro Cherkos, on the northern outskirts of the town, before proceeding on to Mekele in time to explore this fast growing city.Planet Hotel or similar

Drive through mountains and gorges on the way to Lalibela.

Today is a long day’s driving but the scenery, once again, is spectacular as we pass through mountains and river gorges, seeing for ourselves why Ethiopia’s landscape is completely different to anywhere else. We eventually reach Lalibela, possibly Ethiopia’s most famous site. Roha Hotel or similar

We spend the day exploring Lalibela’s rock-hewn churches. Whilst they may feel busy compared to the ones we’ve visited in Tigrai they are still spectacular and well worth visiting. The churches are mostly cut from solid rock, and therefore have the appearance of being underground. The most famous church is Bete Giorgis (St George, patron saint of Ethiopia), carved in the form of a Greek cross. It is exceptionally well preserved and visually almost flawless. The churches are quite dark inside, with little artificial light, and in some cases limited natural light. In each one there is a resident priest, who is usually happy to put on richly embroidered vestments and pose for a photo with his crosses, ancient bibles and sunglasses (due to constant camera flashes!). Although the churches are remote, they are not short of worshippers: most Ethiopians, certainly of the older generation, are devout Orthodox Christians, and the services in the churches on religious festivals are of marathon length: sixteen hours is not unusual! Roha Hotel or similar

Mule trek up to Ashatan Maryam.

In the morning we enjoy an optional (no extra cost) adventurous mule journey to visit Ashetan Maryam (St Mary), built on a ridge with excellent views over the surrounding countryside. The trip takes approximately 6 hours (round trip) and will start early to avoid the heat. We will ride the mules up the mountain for approximately an hour, before hiking the rest of the way up the mountain to the church. After visiting the church we will walk back down to the village on slippery mountain paths. This is a tough walk and is optional. If you choose not to do the walk there is plenty to do in Lalibela: There is the opportunity to walk into the town and visit some of the many shops or relax in a Tej bar to sample the local fermented honey drink or a local café to socialise. The rest of the day is spent absorbing the atmosphere of this extraordinary town with its Tukul or round houses. Made as two storey buildings, they are unusual in Africa. Roha Hotel or similar

An afternoon flight takes us back to Addis Ababa. We are then transferred to the hotel for day rooms and get settled before enjoying an optional final dinner at a well-known local Ethiopian restaurant. Transfer back to the airport in the late evening for our international flight back home. Please note that due to flight schedules, some departures may include an extra night at the end of the trip for flight inclusive clients and a day-time return-flight. The extension to the Islamic city of Harar starts today with an overnight in Addis Ababa.