Sail into a part of the world few ever venture, as the nimble G Expedition gives you a glimpse into the unspoiled wilderness of Greenland and Spitsbergen. Your adventure goes beyond the deck of the ship, with zodiacs and your own two feet taking you deeper into this glacial paradise. From exploring Northeast Greenland National Park to taking in frigid ocean horizons to a stop at the community of Ittoqqortoormiit, this journey shows you how those — whether person or polar bear — make the Arctic their home. 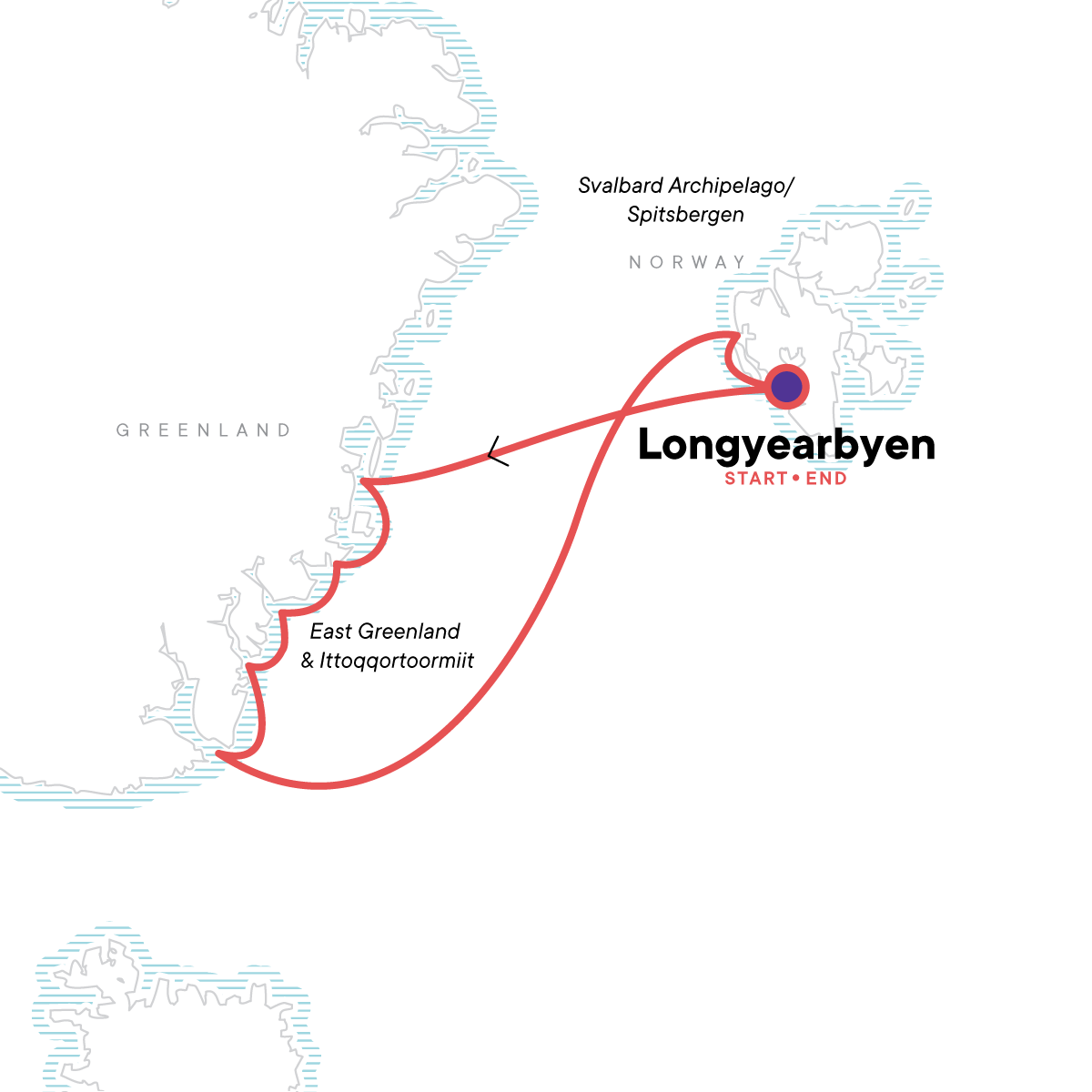 Longyearbyen can be spotted from above as a colourful collection of buildings set against the dramatic landscape of Norway's northern reaches. This small coal-mining town turned gateway to Arctic exploration offers visitors a look into life beyond the Arctic Circle. Get to know the locals and gear up for your expedition. Transfer from Longyearbyen to the G Expedition for a late afternoon embarkation.

Please make sure you drop your checked luggage off at the meeting point between 9am - 1pm. A local representative will be in the luggage storage room. They can provide general information about the town or your embarkation process. All passengers will be transferred to the ship as a group for embarkation at 4pm. For embarkation, please ensure that you have your passport accessible (not in your luggage which is being transferred separately to the ship).

Spend several days exploring the massive fjord system of Northeast Greenland National Park. Head into Scorsbysund, the tree-like fjord system marked by winding branches of iceberg-dotted fjords. Sail through and land on some of the most spectacular fjord country in the world while exploring rarely visited glaciers, bays, and inlets. Here, in the vast, untouched wilderness of the park, you will be overwhelmed by the changing light of a polar sunrise or sunset draping the mountains in lavish colours. Dark nights allow for star-gazing and the possibility of spotting the aurora borealis when in calm waters. Occasionally, orca, humpback, or minke whales may be spotted, so keep a keen lookout. Bring your binoculars and dress for the polar chill. Be immersed in the full experience with educational lectures by expedition staff.

Frigid waters drain from the Arctic Ocean in a southwest current along the coast of Northeast Greenland. Often, drifting pack ice is pushed along the coast. We will attempt to approach and follow the pack ice edge to explore the polar seascape. Keep a lookout for sea mammals like seals and whales and also sea birds such as kittiwakes and fulmars.

After several days traversing the far reaches of Greenland's awe-inspiring wilderness, visit the community of Ittoqortoormiit. Although small and far from other inhabited towns, the vibrance of life here is evident in the brightly coloured buildings, the eager Greenlandic husky puppies, the purr of the ATV engines racing along unpaved roads, and the warmth of the people who call Ittoqortoormiit home.

Take advantage of local ice and weather conditions to explore the Northwest Spitsbergen National Park, one of those rare places on Earth blessed with both an awe-inspiring landscape and compelling history. The Svalbard archipelago sits halfway between Norway and the North Pole, at the intersection of the Arctic Ocean, the Norwegian Sea, and the Greenland Sea. Fascinating flora and fauna populate the dramatic mountains and valleys of this island chain known by many early explorers as the last outpost en route to the North Pole.

Explore a small portion of the western coast of Spitsbergen. Entering the fall the days are getting shorter so try to take advantage of all of the sunlight possible to search for wildlife. Look out for Svalbard's unique subspecies of reindeer. Although much smaller than their southern relatives, they still carry impressive antlers. Keep a sharp lookout for Arctic foxes. By not having a set itinerary, we take on an expedition spirit and are free to take advantage of the best that Svalbard has to offer.

On the departure day, there will be transfers available to the Longyearbyen airport for all passengers with flights scheduled.

General disembarkation from the vessel is at approximately 8:00am. You will be transferred to either the airport or the Radisson Blu Polar hotel, depending on the time of your flight. Those transferred to the hotel will have an opportunity to explore the town centre on their own, and then be transferred to the airport later in the day as per flight schedules. Transfer times will be confirmed and communicated onboard prior to departure. Due to restrictive airline schedules for flights departing from Longyearbyen, we are pleased to offer an early morning disembarkation and transfer to the airport for those passengers with flights departing Longyearbyen around 2:30am (dependent on airline schedules).