Lost cities, crusader castles and sleeping under the stars are all part of this action packed family holiday to Jordan. Discover the spectacular lost city of Petra, with a night under canvas next to its smaller neighbour known as Little Petra; spend a night in a comfortable Bedouin camp complete with ensuite bathrooms in the Wadi Rum desert and get to swim the Red Sea and float in the Dead Sea. Petra - Visit the spectacular 'Rose Red City' of the ancient Nabateans Wadi Rum - Enjoy a delicious meal in the desert and camp under the stars Aqaba - Swim and snorkel in the turquoise waters of the Red Sea Little Petra - Spend a night at a secluded camp next to Little Petra, watching the sun set over the site 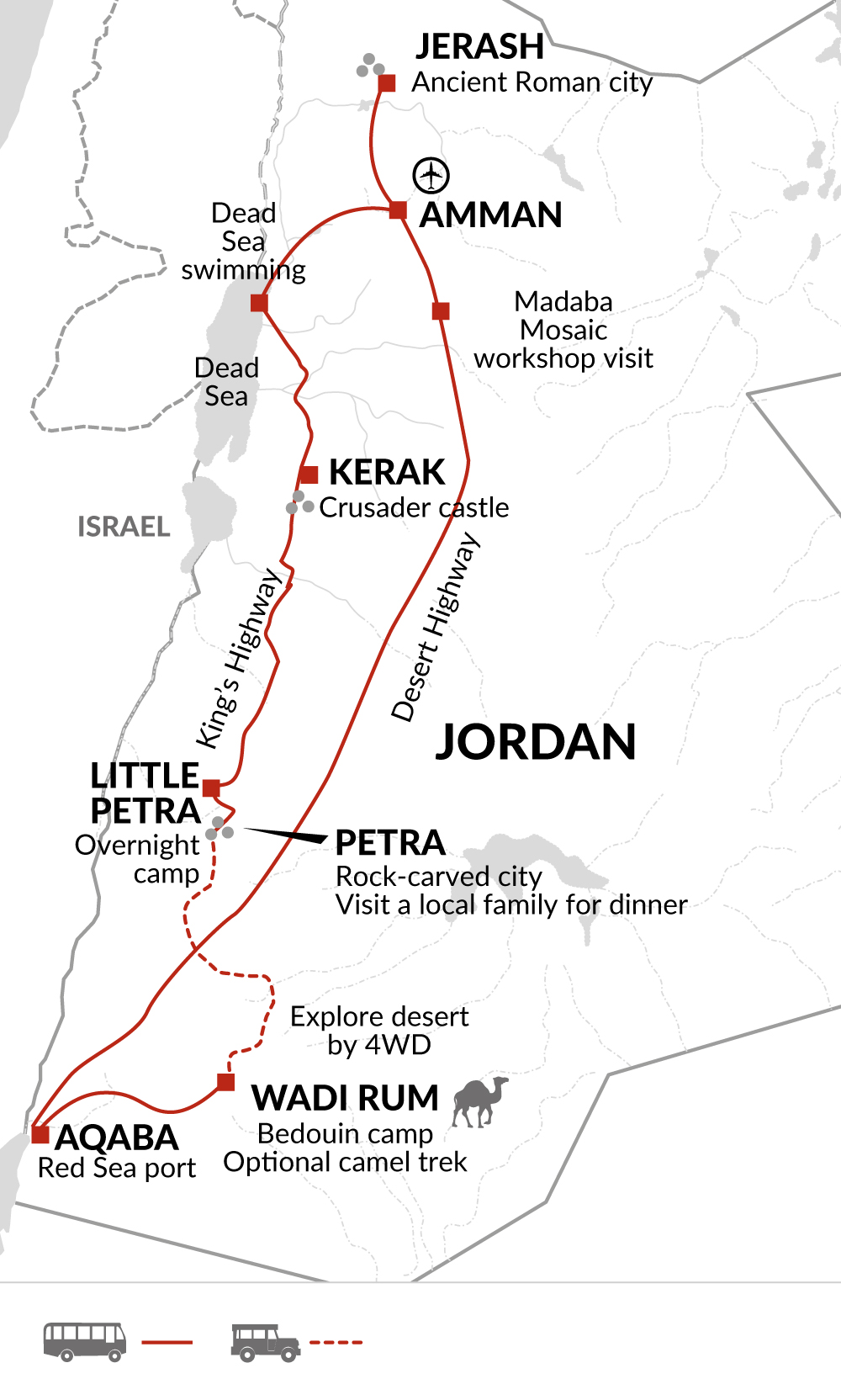 Arrive in Amman, the capital of Jordan. Amman as we know it now is a young city, home to almost half of the country's population. It's a fascinating city full of contrasts, where the very ancient and the brand new collide. There are no planned activities for today, so you can arrive into Amman at any time. If you would like to receive a complimentary transfer today, you'll need to arrive into Amman's Queen Alia International Airport (airport code AMM), which is around one hour from our hotel. Due to a majority of flights arriving in the late evening, your leader will meet you for the welcome meeting on the morning of day two. If your flight arrives earlier in the day, perhaps you might choose to head to the Temple of Hercules in the commercial heart of the city. Surrounded by ultra-modern buildings, hotels, smart restaurants, art galleries and boutiques old and new rub shoulders comfortably with traditional coffee shops and tiny artisans' workshops.

This morning drive northwards to ancient Jerash, located in the Gilead Hills. One of Jordan's major attractions, Jerash is a beautifully maintained Roman city, considered to be the best preserved of the Decapolis, a confederation of ten Middle Eastern cities under the Emperor Pompey. One of the highlights of the Middle East, a triple arch gateway, gives way to colonnaded streets, theatres, temples and baths. It is estimated that this represents only about 10% of the entire city, the rest is still to be uncovered. We spend several hours exploring the site. Travelling onto the town of Madaba, once a one of the most important Christian communities east of the Jordan River. Today Madaba harbours a collection of extraordinary mosaics, including the incredible 6th century Great Map of of the holy land mainly Jerusalem. Discovered in 1896, it contains detailed depictions of the important pilgrimage sites throughout the Holy Land, including Jerusalem, and is believed to be the oldest surviving map of Palestine in existence. We watch and learn the procedures of mosaic production from the specialists before returning to Amman. If time permits, you will be able to wander around the streets of the capital and discover it's unique blend of old and new. The Temple of Hercules is in the commercial heart of the city along with ultra-modern buildings, hotels, smart restaurants, art galleries and boutiques that all rub shoulders comfortably with traditional coffee shops and tiny artisans' workshops. The downtown area is much older and more traditional with smaller businesses producing and selling everything from fabulous jewellery to everyday household items. The people of Amman are multicultural, multi-denominational, well-educated and extremely hospitable.

This morning drive to the shimmering Dead Sea. At nearly 400m below sea level, it is the lowest point on earth. Surrounded by barren hills, this unique body of water has an amazingly high salt content (33%) which means no animal life survives and that it is almost impossible to sink! But don't take our word for it, try for yourself. There is also access to a hotel pool, beach, showers and the hotel restaurant and bars. We then head south following one of the oldest trade routes in the world, the King's Highway, which once carried the richly laden caravans of Solomon. We reach Kerak, imposingly positioned on a hilltop, which became famous in the time of the Crusades as one of a chain of fortresses in the Holy War against Islam. Built in 1132 by Baldwin of Jerusalem, a Crusader king, the castle finally fell to the forces of Saladin himself and who was so impressed with the courage shown by its defenders that he set them free, we spend time touring the castle at Kerak, with stories of what life was like for the early crusaders. From Kerak continue south to Siq al-Barid known as Little Petra. Arriving mid to late afternoon our accommodation tonight is a traditional Bedouin camp located ten minutes\ walk from Little Petra's entrance. Take a stroll from the camp to explore the site which contains several Nabatean temples and structures carved into the bedrock, the site is also a great deal quieter than its more famous neighbour. Returning to camp to watch the sun sink below the sky line, enjoy a traditional dinner served in the communal tent. On warm nights its worth sitting outside - there is no light pollution here and on a clear night the night sky is magnificent.

After breakfast at our campsite, make a short drive to Petra, without doubt one of the most famous and awe inspiring sites in the Middle East. Abandoned centuries ago, Petra was the rock cut stronghold of the Nabateans (and the final resting place of the Holy Grail - according to Indiana Jones and the Last Crusade). Surrounded by imposing mountains and approached through a deep, narrow cleft in the rocks known as the Siq, it is a unique and unforgettable place. Enhanced by the play of light and shadow, the sights are an altogether overwhelming experience. In the morning we walk through the Siq and enter this lost city, sighting the famous temple façade of the Treasury as we approach. A guided walking tour will take us to some of the key parts of this remarkable site after which the rest of the day is free to walk through one of the most impressive and exciting attractions of ancient history at leisure. We return in the evening to our hotel located just beyond the site entrance.

A full free day in Petra. Returning to the city you can climb steep paths to the sacrificial 'High Places' (altars) and hike to the top of Jebel Harin (1396m) for a stunning view over Wadi Araba and the Negev Desert. The Monastery is the largest of Petra's monuments and certainly worth the steep climb up to it. Towering to a height of 40m, its doorway alone measures 8m in height, dwarfing anyone framed within it. It is a place to lose oneself in the atmosphere of the past. This evening we visit a local family in Wadi Musa, close to Petra for dinner and to learn about the local way of life and traditions. Your tour leader will explain how the meal is prepared as well as how local Bedouin tea and other traditional dishes are made. Dinner is likely to be a national dish of the country, such as Makloobah, which is lamb cooked in a sauce of fermented dried yogurt and served with rice.

We spend today experiencing the beautiful area of Wadi Rum. Departing after breakfast, head off south for an exciting half-day four-wheel drive through stunning desert scenery. Travelling via the old Roman road, we explore the lesser-known northern areas of Wadi Rum, seeing natural rock bridges and viewing incredible rock sculptures on the way to our overnight camp. After lunch we rendezvous for an unforgettable trek, either on foot or you have the option of taking a camel. We ride and/or walk for about 2 hours through a landscape of sandstone mountains, white and pink coloured sands and a desert that is dripping in the 'Lawrence of Arabia' legend with scenes of the famous film being shot here. The desert has been inhabited by the nomadic Bedouin people for generations and we discover how the Bedouins of Wadi Rum live with explanations from our guide and the opportunity to visit a local Bedouin family and share a cup of tea with them. During the afternoon we learn about the Bedouin habits and way of life, their culture and the stories that have been passed down from previous generations. They believe that Wadi Rum is beautiful due to its magical landscape, and so we include time in this area with few other visitors which help us discover the silence and majesty of the desert. The Bedouin culture is also famous for story-telling and we get the chance to listen to stories about the past days and generations of those who used to live in the vast desert of Wadi Rum. We overnight at Space Village Luxury Camp, located in the heart of the Wadi Rum Desert surrounded by dramatic sandstone mountains and huge sand dunes. The individual Bedouin style tents are spacious and feature modern en suite bathrooms and comfortable bedding. There is a large communal dining tent with low Middle-Eastern-style seating or you can relax under the stars on the blankets.

Leaving Wadi Rum, drive to Aqaba on the Red Sea. Aqaba is Jordan's only seaport and has a long history of occupation and trade. King Solomon's ships left here loaded with copper whilst the Edomites and the Nabateans used the port as part of a trade route from Damascus to Egypt. The Roman 10th Legion was stationed here and during the 12th century the Crusaders made good use of Aqaba's strategic position. During World War I, the Arab troops under Prince Faisal used the fort as a base for attacks on the Ottoman forces. After checking into our hotel, the rest of the day is free for you to relax. The hotel is located in the heart of Aqaba, ideal for exploring Jordan's second biggest city or heading to the beach.

Today you have a free day where you may wish to enjoy the splendid coral reefs and clear warm waters for which Aqaba is famed. Aqaba has numerous watersports activities including sailing, snorkelling and glass bottom boats for hire, so there should be something for everyone. Later this afternoon we will drive back to Amman.

The trip ends after breakfast at our hotel in Amman. There are no activities planned today, so you are free to depart from Amman at any time. If your flight is departing later in the day luggage storage facilities are available at our hotel. If you would like to receive a complimentary airport transfer today, you need to depart from Amman's Queen Alia International Airport (airport code AMM), which is around one hour's drive from the hotel.