From the Dolomites to Lake Garda Cycling

Cycle from the stunning Dolomites, past meadows, orchards and vineyards to the shores of Lake Garda. 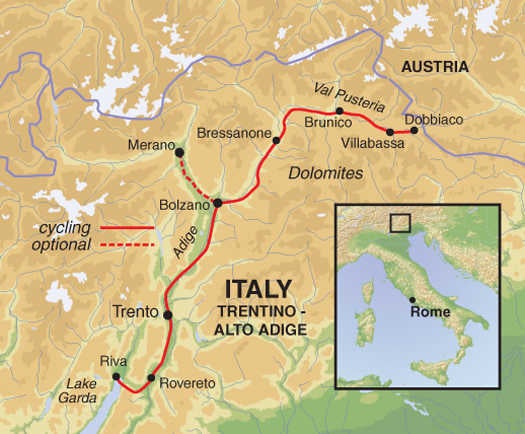 Spend some time relaxing by the hotel's pool or spa area. (Staying at the Hotel Santer, Breakfast only)

Take some time to explore the beautiful church in Dobbiaco before setting off along the Val Pusteria following the milky blue Rienza River, passing deep green meadows, whilst mountains loom above. You'll admire a series of quaint Austrian-style towns, where there are plenty of opportunities to stop and have refreshments. Arriving in Brunico, take the time to walk up to its castle and enjoy wonderful views of the town. You stay at the Hotel Corso (Breakfast only)

Make your way to the head of the Val Pusteria today, continuing along the Rienza river, passing castles and lovely towns. You could wander around Chienes, with its Baroque church and the parish church with the best-preserved altar in the Tirol. Just before Rio Pusteria you'll see the impressive ruins of the Chiesa di Rio Pusteria, and heading onwards, the biggest fort in Alto Adige, the Forte di Fortezza. Then it's on a forested track to meet the Isarco River and into Bressanone, perhaps stopping at the Abbaza di Novacella (or return on your day off). (Staying at Hotel Krone, Breakfast only)

You could easily spend the day exploring the stunning town of Bressanone. Visit the 10th century cathedral, rebuilt in Baroque style in the 13th century, the Renaissance Bishop's Palace, which houses several artworks, including a nativity scene with more than 5,000 figurines, and the interesting Pharmacy Museum. Or cycle back to visit the Abbiaza de Novacella or take a trip on the Plose cable car from nearby San Andrea.  (Staying at Hotel Krone, Breakfast only)

The Isarco River leads you out of Bressanone. The cycle tracks today hug the river, at times you are almost above the river, as you meander along the edge. Take time to stop in impressive Chiusa, the medieval town with narrow streets and little art and craft shops. Standing above the town is the impressive Castel Sabbiona. Enjoy the downhill ride as you criss-cross the river on perfect cycle tracks. At the exit of the village of Blumau, perhaps stop for lunch in their lovely beer garden before heading into Bolzano for your next two nights. (Staying at Parkhotel Laurin, Breakfast only)

Bolzano is a treat of a city to walk round; it was in 2014 voted as having the 'best quality of life in Italy'. It is where Italy really begins, despite still being in the German-speaking region, 75% of its inhabitants now speak Italian as first language. Aside from wandering around the city's piazzas and porticoes, there are some interesting monuments and museums. The big attractions are the South Tyrol Museum of Archaeology, which houses a mummy of Otzi the Iceman, the Gothic cathedral, modern art museum, or the Dominican Church housing a series of 14th century gothic art. There are also three castles and a cable car that takes you out of the city to the small town of Ritten, where there are some nice walking routes. Alternatively, you can take the train to the spa town of Merano, and cycle back along the Adige River for 32km.  (Staying at Parkhotel Laurin, Breakfast only)

The longest day of the holiday is a lovely flat ride following the Adige River, and the narrow Adige valley, passing beautiful cliffs as you cross into Trentino and out of German-speaking Italy. Apples turn to vines as you cycle alongside vineyards. Maybe take time to stop in Egna, once a Roman village, you can still see one of the old Roman houses and pass the old arcades in the old town. Follow the river through a lovely relaxed nature reserve before arriving in bustling Trento with its stunning architecture. (Staying at Grand Hotel Trento, Breakfast only)

Highlights today include the Piazza del Duomo where the magnificent late Baroque fountain is framed by the 12th century Romanesque-Gothic cathedral and the frescoed Museo Diocesano Tridentino, home to one of the most important ecclesiastical collections in the country. Don't miss either the Castello del Buonconsiglio, residence of the Prince-Bishops of Trento between the 13th and 18th centuries, and the Via Prepositura, where beautifully restored pastel buildings date back to the ancient Roman City. (Staying at Grand Hotel Trento, Breakfast only)

You'll have a real sense of achievement today as you complete your final leg, with the option to visit Rovereto en route, down from the mountains to the shimmering waters of Lake Garda. Writers and artists, inspired by the wild beauty and vibrant Mediterranean-style colours, have been coming here for centuries, with Goethe calling it 'a marvel of nature, an enchanting place'. (Staying at Astoria Park Hotel Spa Resort, Breakfast only)

We take you to Rovereto for your train to Verona or onwards, or maybe spend a couple of extra nights relaxing on the lake.