As we fly from Quito to the Galapagos Islands, located in the equatorial water of the Pacific Ocean, we suddenly find ourselves in a very different world. As we board our vessel, the M/Y Grand Queen Beatriz and follow in the footsteps of Charles Darwin, we start to encounter nature at its finest. This is indeed the Galapagos journey with something for everyone. 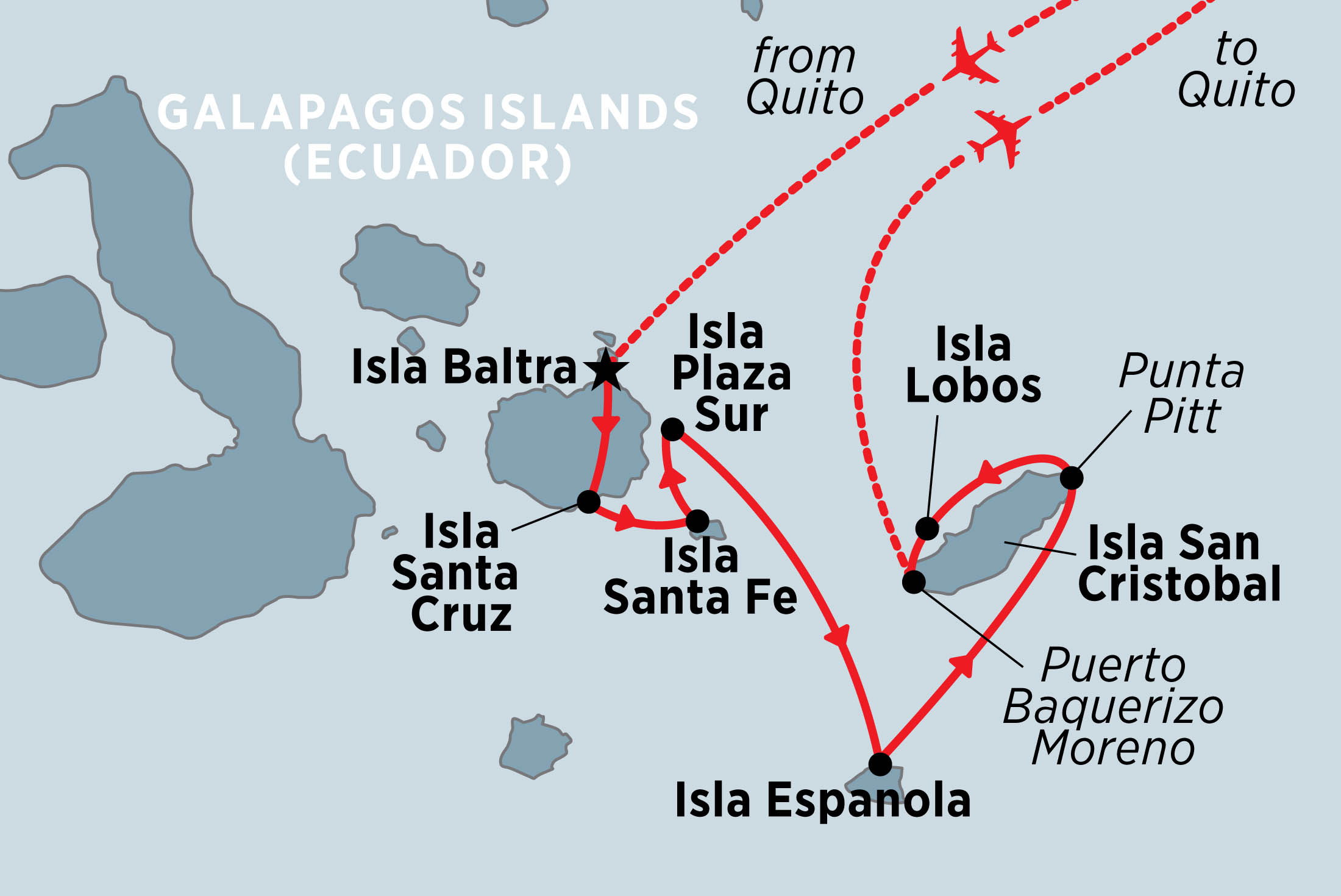 On arrival at Quito's Mariscal Sucre International Airport you will be met and transferred to your hotel. The remainder of the day will be at your leisure. A welcome meeting will be held in the evening at either 5 pm or 6 pm where you meet others travelling with you on your cruise to the Galapagos Islands.As today is an arrival day, you can arrive at any time as there are no activities planned until this important meeting. Quito sits at high altitude under the towering Pichincha volcano. It is a beautiful city, arguably one of the most beautiful in South America. The city stretches along the valley and is surrounded by the Andes. The Old Town of Quito is awash with history, with more than 30 churches to explore, and a number of fascinating museums. La Compania de Jesus is considered to be the most beautiful and ornate churches in the Americas. The city's oldest street, Calle La Ronda, is well worth exploring.

This morning you will be transferred to the airport for your flight to the Galapagos Islands. Please note the pick-up time will usually be as early as 4:30 am (a boxed breakfast will be provided), as the airport is a one-hour drive away and you must allow for delays and check-in times. (Your tour leader will confirm this time with you at the Welcome Meeting on Day 1). The flight to the Galapagos will make one stop in Guayaquil to pick up other passengers. (Total flight time is about 3.5 hours). On arrival in the Galapagos, you will be met in the arrival hall of the airport (look out for 'Grand Queen Beatriz' signs) by a transfer guide and transferred to our motor yacht – ‘M/Y Grand Queen Beatriz’, anchored on the other side of Santa Cruz Island. Our transfer guide will take you on an airport public bus for a short distance (5 minute drive) to where you board a public ferry across the Itabaca Channel. The ferry crossing takes only 7 minutes. (Please note that all public transportation costs are included). Once you reach Santa Cruz Island, you board a private bus for a 45-minute drive to Puerto Ayora, the main port of the island. Here, there will be two dinghies to transport you and your fellow travellers to the 'M/Y Grand Queen Beatriz'. Once on board, cabins will be assigned and there will be a welcome briefing and safety drill. You will then get to meet our crew members and get to know your naturalist guide while enjoying a delicious lunch. Your first stop in the afternoon is Santa Cruz, the second largest island in the Galapagos. The small town of Puerto Ayora is the economic centre of the archipelago, and home to the Charles Darwin Research Station. As well as undertaking vital conservation work, the station also makes for interesting exploration and offers the best opportunities for close encounters with giant tortoises. You will also observe baby tortoises and land iguanas.

Isla Santa Fe is home to many sea lions and these ones are very eager for swimming partners! It’s a lovely place to take a dip, offers a dense concentration of wildlife, and is a fantastic place to see many of the stars of the Galapagos in one relatively small area. Expect to see Galapagos hawks, land iguanas, a variety of finches, Galapagos mockingbirds, sea lions, marine turtles, frigatebirds, Galapagos doves and lava lizards. It’s a naturally beautiful island as well with one of the most attractive coves in the archipelago and the jade-green waters are ideal for snorkelling. A trail follows the coast into the opuntia forest, where you see Santa Fe's trees - the largest in the Galapagos. The island is also home to a unique sub-species of land iguanas. Hiking towards the cliffs on Santa Fe will lead you to a forest of prickly pear cactus. A member of the cactus family, their name comes from the pear-shaped fruit the plant produces. Santa Fe is home to endemic land iguanas.  A small island, Plaza Sur is nonetheless a place of great beauty, where you will get close to sea lions and on to trails past one of the Galapagos’ largest land iguana populations, resting amid cacti and volcanic landscapes coloured bright red and green by sesuvium. The island’s rugged southern cliffs are an excellent place to spot tropicbirds and swallow-tailed gulls, as well as the 'Gentlemen’s Club’, a gathering of male sea lions either too young or too old to be beachmasters!

This morning you will visit Punta Pitt on the eastern end of San Cristobál Island. Walk to the top of the volcanic hill for expansive views of the sparsely vegetated area. A variety of seabirds nest here, including blue-footed boobies and frigates. On a 'panga' ride you can observe the three varieties of boobies nesting in the Galapagos and enjoy a snorkel from the beach. Close by you will pass through Leon Dormido (Kicker Rock), the magnificent basalt remains of a crater in the middle of the sea, the shape resembles a sleeping lion. The rock rises 150 metres above the surface and is divided into two parts by a narrow channel. You cruise through the channel with nesting seabirds on either side of the boat, tropic birds overhead, marine iguanas in the water and many sea lions present including many resting on the rocks. Snorkelling gives us the opportunity to see Galapagos sharks, and possibly a hammerhead shark among sea turtles and an incredible biodiversity of invertebrates on the rock wall. You will also visit Isla Lobos, a tiny island almost touching San Cristobál Island. This is the perfect time to witness the always friendly sea lions as they play in the calm shallow waters here. Blue-footed boobies, frigate birds and marine iguanas are also easily seen.

As flights to the mainland from Galapagos depart mid morning, it is an early start for our last morning on the islands. Depending on the time of our flight, our time spent on this final excursion could be limited. Visit San Cristobal Interpretation Center in the morning. This centre brings the history and geography of the archipelago to life, from its volcanic origins to the present day. The human history exhibit offers an insight into the discovery and colonisation of the Galapagos, and the reality of the problems the islands face today is also explored. You will then head to the airport for our flight back to Quito. Upon arrival in Quito Airport you will be transferred back to your hotel for an overnight stay.

Your Galapagos adventure will come to an end today after breakfast. There are no activities planned for the final day so you are able to depart the accommodation at any time. There are many fascinating things to do in and around Quito, so please speak to our customer service representative about any optional activities that might be of interest. They can also assist you in booking a departure transfer to the airport.