Encounter the island chain that has enchanted explorers since Darwin first weighed anchor off its shores. Spend seven nights exploring the incredible wildlife of the Galápagos archipelago in the company of an expert Naturalist Guide. In the evenings, return to the Xavier to reflect on the day’s adventures. Retire to air-conditioned cabins with exclusive lower berths and private bathrooms – that’s why you'll never end up on another operator's ship. 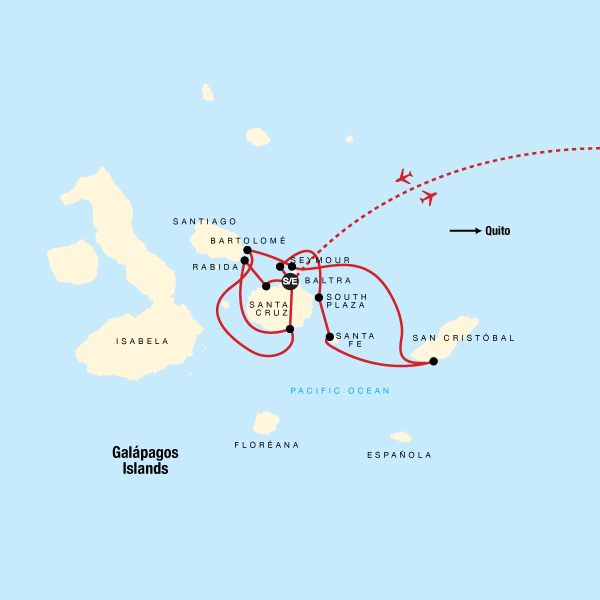 Arrive at any time.

A G Adventures representative will greet everyone at the hotel and brief the group on the various aspects of the tour.

Transfer early to the airport for the flight to the Galápagos Islands. Upon arrival meet the Naturalist Guide, who will assist with the transfer to the Xavier, located in Puerto Ayora on Santa Cruz Island. Visit the Santa Cruz highlands and get up close and personal with giant tortoises.

Flights from Quito to Baltra depart between 6:40am and 9:40am depending on the day of the week. These will arrive into the Galápagos between 9:30am and 12:30pm with a short refuelling stop in Guayaquil (you will not disembark the plane). You will generally arrive at the boat in time for lunch before the afternoon activity.

Visit Chinese Hat for snorkelling opportunities and to observe the birds and sea lions before taking an excursion to Black Turtle Cove to see the marine life.

Spot Galápagos penguins and explore marine life that is fantastic for snorkelling. There is also a large sea lion colony at Chinese Hat as well as many marine iguanas that can be seen on the guided walk. Hike among the volcanic scenery, with good views to the cone of the island's volcano. In the afternoon, take an excursion by "panga" to Black Turtle Cove to witness the extensive mangrove system and interesting waterway canals. Sea turtles and different species of rays can often be seen in this cove, offering a peaceful and fascinating glimpse into the diversity of the area.

Visit Cerro Dragón on the west coast of Santa Cruz Island to see land iguanas and a salt water lagoon frequented by flamingos and other species of birds. Continue to Daphne Island in the afternoon to spot birds and wildlife.

Land at South Plaza in the morning for wildlife spotting opportunities. Afternoon visit to Santa Fé Island for guided walks to observe the wildlife and plentiful marine iguanas. Opportunities for swimming and snorkelling with the sea lions.

Explore two tiny islands that are big on wildlife. North Seymour offers great views of nesting seabirds, including frigatebirds and Mosquera is home to large colonies of sea lions.

Visit Sullivan Bay on Santiago Island to witness the giant lava formations contrasting the white-coral sand beach. Continue to Bartolomé Island for a guided tour to see the dramatic volcanic features before hiking to a panoramic viewpoint.

Disembark in Puerto Ayora and visit the Charles Darwin Research Station to see the giant Galápagos tortoises. Fly back to Quito.

In the morning, arrive in Puerto Ayora on Santa Cruz Island and visit the Charles Darwin Research Station. Then transfer to the airport on Baltra Island for a flight to Quito. Transfer to the hotel and spend the rest of the day at leisure. Enjoy one last night in historic Quito.