The god Apollo himself was born on these islands, so could there be a more appropriate place for a holiday? The Greek islands are home to a wealth of ancient history, incredible food and sun-kissed locals eager to toast your arrival with a glass of ouzo. Soak up the million dollar views of the Cyclades while relaxing on Santorini, stroll through the lush gardens of Crete, and discover the old world charm of Mykonos’ famous white streets. Whether you’re searching for tumbledown ruins and ancient myths or simply a stretch of sand by the Mediterranean to read a book on, Greece has it all in spades. 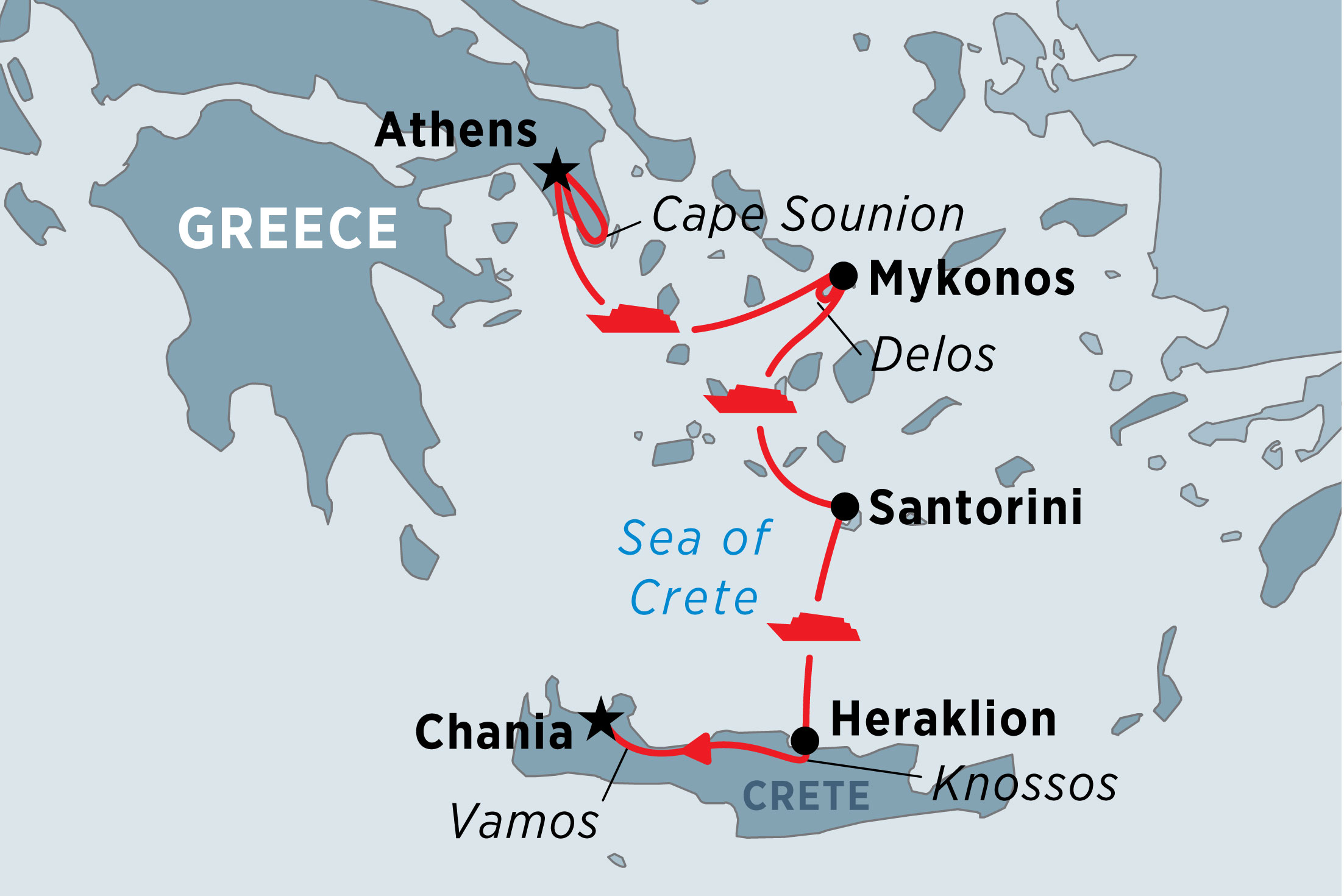 Arrive in Athens, Greece’s lively capital. There is a lot to experience in this ancient city, so arriving a few days early is highly recommended. There are no activities planned for today and you can arrive at any time. Your adventure starts this evening with a group welcome meeting. Afterward, enjoy a dinner with the group at a local restaurant in the vibrant Psiri neighbourhood.

This morning travel to the town of Cape Sounion and visit the ruins of the ancient Temple of Poseidon, the god of the sea in classical mythology. The remnants are perched on the headland and surrounded on three sides by the sea, creating spectacular views of the Greek coastline. Look closely and you'll also find the ruins have been engraved with the name of English Romantic poet Lord Byron. Return to Athens in the afternoon and enjoy the rest of the day to explore. Perhaps visit the Parthenon or the Acropolis Museum, where you can find relics from Ancient Greece. Another option is to watch the uniquely theatrical changing of the guard at Parliament or see where the Olympics once took place at the Panathenaic Stadium. At dusk, pull up a chair at one of the local restaurants and dine on traditional souvlaki and ouzo.

This morning you will be transported to Athens' port at Piraeus and board a ferry bound for the island of Mykonos (often also spelled Mikonos). Ferries are a great way to travel between the islands and are the life blood of many remote islands in Greece's multitude of archipelagos. Mykonos, considered the most glamorous and cosmopolitan of the Cycladic islands, still holds on to its old-world charm and many locals maintain their peaceful island existence among the many foreigners who grace their shores. Upon arrival you will be transferred to the area of Tourlos, where the hotel is located. After settling in, you'll visit Mykonos’ charming Old Town, a captivating labyrinth of stone-paved laneways, traditional whitewashed houses and windmills. This evening you will make your way to the village of Ano Mera for a delicious dinner at a local taverna and taste the local Myconian delicacies mostra and louza.

Today you will make an excursion to the island of Delos, a short boat trip from Mykonos. Delos has a vast and interesting history and is one of Greece's most important archaeological sites. It's considered a sacred place. You will explore the site in depth and gain an insight into the island’s intriguing history. New discoveries of the ancient world are still made here from time to time. Delos is acclaimed as the birthplace of Apollo and Artemis and has been inhabited since around 3000 BC. The earliest shrines and temples were built around the 8th century BC. When the Romans set their sights on the island in 167 BC it became a free trading port and home to a flourishing slave trade market, with thousands of slaves being traded daily. In the afternoon you will take a return ferry back to lively Mykonos.

Bid farewell to Mykonos and travel by ferry to spectacular Santorini, the southernmost island in the Cyclades group. Upon arrival in Santorini's capital, Fira (often also spelled Thira), you will be met and transferred to your hotel. Enjoy a free afternoon to absorb this veritable paradise. Your leader will be able to offer suggestions on what to see and do. In the late afternoon you will view Santorini's world-famous sunset, which has been immortalised in many photos and works of art. Enjoy a sunset picnic overlooking the caldera away from the crowds. Indulge in local cheese, ham and bread, all complimented by a local grape variety and a world-class view.

In the morning, embark on a hike along Santorini’s legendary caldera. The island you see today is what remains from a huge volcanic explosion that destroyed the early settlements and created a geographical caldera. The spectacular natural beauty of this caldera is what makes Santorini such a special place. Your walk begins at your hotel and you will continue along the north-western rim of the caldera, passing steep cliff faces and experiencing breath-taking views along the way. The walk ends in the town of Oia (pronounced ‘eeah’). Oia was built on a steep slope inside Santorini’s incredible volcanic caldera. Transfer back to Fira where you will visit the fascinating Prehistoric Museum of Thira and learn more about the incredible history of this unique island, as well as see masterpieces from the prehistoric Aegean age. The rest of the afternoon is free, so perhaps visit one of the island’s wineries. The vines here are cultivated in a very unusual way, with the plants being pruned to form a low basket shape that sits on top of the volcanic soil to protect the grapes from strong winds. The Santos Winery, a co-operative and the largest winery on the island, offers tours as well as wine tasting. It's also idyllically located, with marvellous views over the island and the sea – a lovely spot for a tipple.

The morning is free for you to explore Santorini as you please. You might like to simply relax on the beach, or perhaps take a boat tour to the hot water beaches and the summit of Nea Kameni (the still active but currently dormant volcano in the middle of the caldera). There is a lot to do on the island and your leader will be on hand to offer suggestions. Art Space, a local gallery, boasts wine caverns replete with an excellent collection of modern Greek painting and sculpture. In the afternoon transfer to Santorini’s port, where you will board another ferry and head across the Sea of Crete to Heraklion on the island of Crete (approximately 2 hours), where you will check into your accommodation for tonight. Heraklion (often also spelled Iraklio) is Crete’s largest city, and its capital. Not as pretty as Chania, the old city still has some noteworthy architectural delights, such as the Venetian loggia and the Morosini Lions Fountain. It is also well known for its culinary delights. Make sure you head out tonight to sample some of it.

Leave Heraklion behind and head to the famous ruins and archaeological site of Knossos (approximately 15 minutes), the former capital of Minoan Crete that is considered to be Europe's oldest city. Once home to 100,000 inhabitants the city was first established during the Bronze Age, well before the time of Classical Greece. According to legend, King Minos built a labyrinth in which the mythical Minotaur (a creature part man part bull) was to be held. Explore the ruins with a local guide before continuing to the traditional village of Vamos (approximately 2 hours). This area is renowned for its rich cultural heritage. Here you will take a short walk around the historical centre of the old neighbourhood with traditional old houses, ruins, ancient stone roads and secret nooks. Stopover at a local tavern and enjoy a typical Greek moment with meze, a meal shared around the table, done for centuries by the locals. Clink glasses with the locals and wash it all down with the traditional local white spirit ‘raki’. Then head to Chania (often also spelled Hania), your base for the next two nights. Your historic hotel, the former British embassy (the feature stay of the trip), is located a short distance from Chania's town centre, in a quieter part of town. After settling in you will take a walk into the Old Town. First stop at the agora (municipal market), then pass a number of historical churches. Discover the remains of a Venetian monastery and wander through the charming Old Harbour area, with its two Venetian shipyards and Great Arsenal building. Heading deep into the narrow cobblestone alleys of the Venetian town, discover a beautiful array of Venetian and Turkish architecture in the former aristocratic area.

Today is a free day for you to explore Western Crete. If you are looking to embark on a great walk on the island, there’s the chance to join an optional excursion to hike the famous Samaria Gorge (17 km; approximately 4–6 hours, depending on fitness level). Alternatively, you can relax on one of Chania’s city beaches. Nea Hora is a sandy beach west of the Venetian walls – it's decked out with sun beds and is close to restaurants. If you walk to the west of this beach you will come across quieter beaches. Another option is to take a local bus to Elafonissi Lagoon on the west coast. Elafonissi is considered Crete’s prettiest beach, and a daily bus goes there from Chania in the morning and returns in the late afternoon. It’s also possible to visit the lush surrounds of the Botanical Park & Gardens of Crete. This nearly 20 hectare garden was destroyed by wildfires in 2003, however it has since been carefully redeveloped. At the centre of the park lies a burnt centennial olive tree, a constant reminder of the devastating fire. Take the time to explore the park and discover some of the 150 species of fruit trees grown here, as well as a rich variety of herbs and plants. Your leader will be able to assist you with all the options available on your free day.

All good things must come to an end, and your Greek adventure wraps up this morning. You may wish to stay longer and explore other parts of Western Crete or head further afield. Your leader will be able to assist you with suggestions on how to get around. Alternatively, simply stay in town to stroll around and admire the old Venetian town, or head to one of the seaside eateries for a leisurely lunch. If you'd like to remain in Chania for a few extra nights, Peregrine Adventures is able to arrange additional accommodation on request.