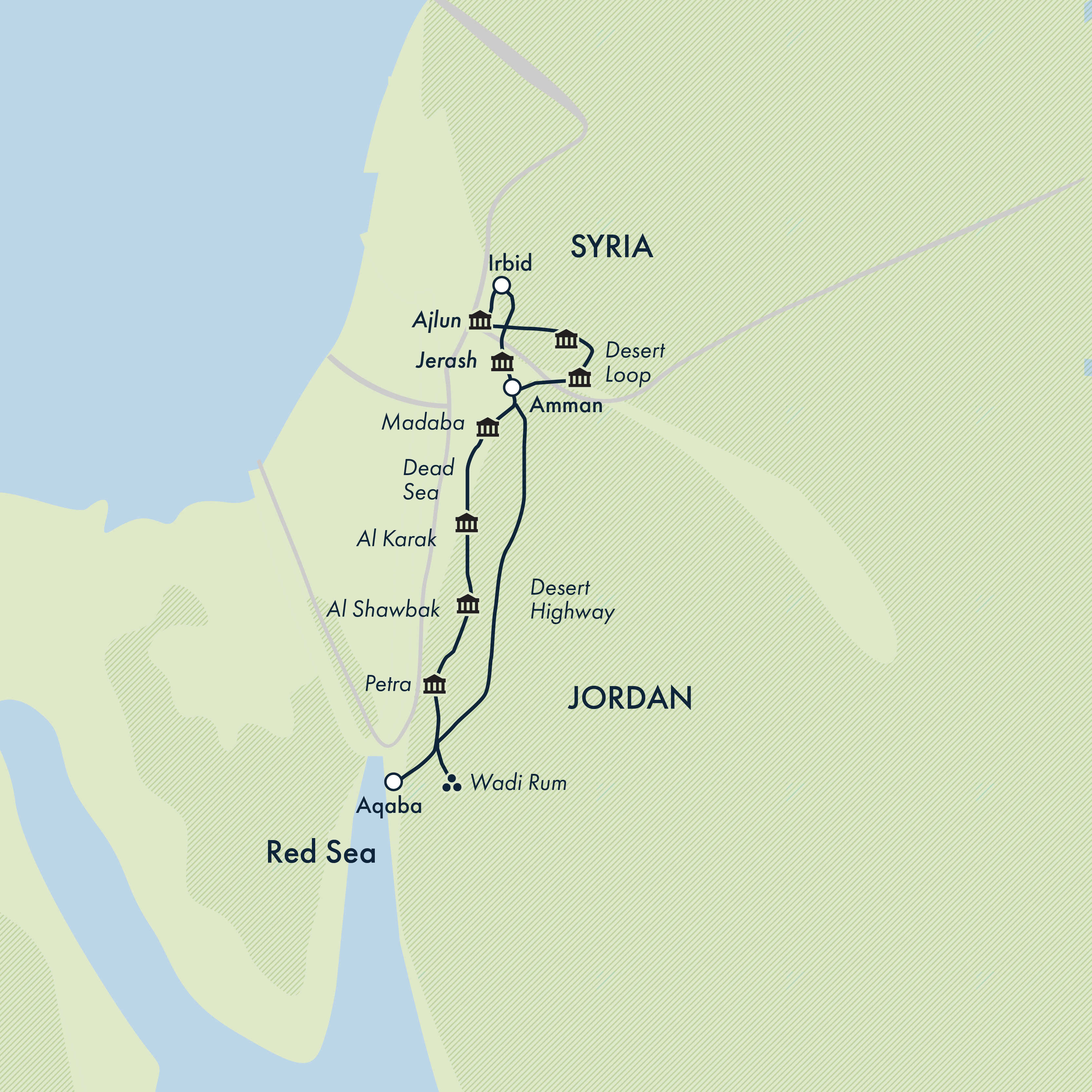 We start at our hotel in Amman on day 1 of the itinerary.  Those on the group flights from London will arrive in the evening.  Land only clients need to provide their flight details if they would like to receive a FREE arrival transfer. Your leader will leave instructions for you at the hotel. Arena Space (4-start) or similar

Visit the castles of the 'Desert Loop' east of Amman.

After breakfast we depart for a visit to Iraq El Amir. Set in the desert to the east of Amman is the much-famed Desert Loop, consisting of numerous palaces and minor forts dating back to the Omayyad period 661 AD to 750 AD. Our first stop is Qasr al- Hallabat. Originally Roman, this castle was rebuilt during the Umayyad period when it was elaborately decorated in mosaics, carved stucco and fresco paintings, thus transforming the castle into a palatial residence. There are about 150 inscriptions within the castle, mostly in Greek. The vast majority of these inscribed stones, which were reused as building material, belong to an edict issued by the Byzantine Emperor Anastasius (491-518 AD). A few kilometres away is the Hammam as-Sarakh, a bathhouse and hunting lodge. The buildings have been almost completely restored, and here we can see the channels that were used for hot water and steam. One hundred kms east of Amman, the oasis town of Azraq has a large castle built from black basalt, which was Lawrence of Arabia's headquarters during the Arab Revolt. Heading back towards Amman, the Qasr El Kharraneh and Qusayr 'Amra are the best preserved of the desert castles, Qusair Amra is noted for its extensive fresco paintings which cover virtually all the interior walls. The paintings include themes such as hunting, dancing, musicians, bathing scenes, cupids, and personifications of history, philosophy and poetry. We drive back to the hotel in Amman.Arena Space (4-star) or similar

Today we begin early as we have a long day heading north. We visit Irbid, which hosts an interesting museum. The most remarkable artefacts are the Ain Ghazal statues dated to the Pre-Pottery Neolithic period; between 7500-5500 BC. In addition the museum contains a number of artefacts from the later periods. Umm Qais, in the north of the country has fantastic views of The Sea of Galilee and was once a centre of culture and arts. As one of the cities of the Decapolis, it was a centre for arts and culture and with its amazing setting it is an enchanting place. Later we proceed to Pella, once an important city in Roman times; most of the remains actually date back to the Byzantine period. Overnight in Jerash. Olive Branch or similar

Visit the ancient city of Jerash and Ajlun Castle.

After breakfast we visit the ancient 'Gerasa'. In Roman times this was one of the ten wealthy, self-governing cities of the Decapolis, and was famous throughout the Roman empire for the luxury of its lifestyle. Buried for centuries under blown sand, Jerash is the only city of the Decapolis to have survived to any extent, with an outstanding forum, colonnaded main streets with the drains still intact, two theatres and a most impressive temple of Zeus. Our journey continues on to the only Arabic castle in Jordan, Ajloun. It is perched on a hilltop and has fantastic views of the surrounding countryside. Originally constructed in 1184 AD, it was destroyed and rebuilt over the centuries following numerous wars and earthquakes. Drive for overnight stay at the Dead Sea.Holiday Inn Dead Sea (5-star) or similar

Visit Bethany then head to Madaba, the 'City of Mosaics' and Mt Nebo then
back to the Dead Sea.

We start the day by visiting Bethany beyond the Jordan, the site where Jesus Christ was baptised by John the Baptist marking the beginning of the new era of Christianity. We then head to Madaba, 'The City of Mosaics '. Best known for its spectacular Byzantine and Umayyad mosaics, it is home to the famous 6th century mosaic map of Jerusalem and the Holy Land.  We see this historical map in the small Church of St George.   Made up of small pieces of coloured stone, the map depicts hills and valleys, villages and towns as far as the Nile Delta during the 6th century.  From here we head to the biblical Mount Nebo where Moses was shown The Promised Land before his death.  There is a purpose built church which houses some wonderfully preserved mosaics. After a good look round we head south back to the Dead Sea in time for a 'float' in the thick saline waters.Holiday Inn Dead Sea (5-star) or similar

Leaving the Dead Sea behind us we drive through the deep gorge of Wadi al Mujib. This massive canyon is impressive and is now a huge nature reserve, covering 212sq km. We arrive at Al Karak and Al Shawbak, two castles that played an important role in the Crusades. Built in mediaeval times Al Karak is the larger of the two castles, its well-preserved fortifications towering over the town offer incredible views. Al Shawbak, though not as well preserved is equally as notable. Late afternoon we drive on to Petra. Overnight Petra.Amra Palace (3-star) or similar

Two days to explore Petra, the so called rose-red city, 'half as old as time'. Petra was hidden for centuries until the Swiss explorer Burckhardt made his great discovery in 1812. It was founded by the Nabateans, an Arab tribe that arrived here in the 6th century BC. Building at Petra began in the third century BC and continued through the Roman period, financed by taxes levied on the desert caravans. Two features of Petra are unique: firstly, it is a city made defensible by being built down a series of chasms, rather than on a hilltop. Secondly, it is built directly into the rock - beautiful red and yellow sandstone carved into the most impressive facades which glow in the brilliant sunlight. To enter Petra we must begin by walking down a narrow chasm, known as the Siq, surrounded by high cliffs on either side. Unveiled at the end of the Siq is El Khazneh, the Treasury. This is just the first breathtaking sight of a remarkable day. Continuing to the centre of the city, we pass the houses and tombs of the rich citizens and the remarkable scale of the site begins to unveil itself.  A optional walk can then be done up 750 steps to El Deir, the monastery, with its superb facade topped by a huge urn. On the second day your guide will take you into the site for either a hike up to the High Place of sacrifice or for free time to explore the city further.  Only a few people attempt to visit the High Place as it can be quite arduous and is not recommended for those who are unsure of their fitness or are uncomfortable with heights. However, those who do make it to the top are rewarded with wonderful views over parts of the site visited on the previous day.Amra Palace (3-star) or similar

This morning we visit Little Petra before joining the modern Desert Highway to make our way south to Wadi Rum. The purpose of Little Petra is not clear however archaeologists believe it was probably a suburb of Petra where visiting traders on the silk route may have stayed. Today we enter the natural world heritage site of Wadi Rum where dramatic sandstone mountains rise from the sandy desert floor is where Lawrence of Arabia and Prince Faisal assembled the Arab tribes for the attack on Aqaba in the First World War and also where sections of the 1962 epic film were shot.After checking into our private Exodus camp our Bedouin hosts take us for around a 2-hour 4x4 jeep trip to explore some of the highlights of the protected area. We go to the main popular sights, have time to sample bedouin tea and then watch the sunset from the vantage point of a rock formation. From here we return to our camp where we enjoy Bedouin hospitality with a traditional dinner called Zarb which is cooked underground. After dinner we learn about Bedouin culture and music through interacting with the family who run the camp. Exodus Private Camp (Permanent Bedouin Camp)

Transfer to Aqaba for optional snorkelling over the coral reefs of the Red
Sea.

We wake amidst the dramatic desert scenery and then make our way on to Aqaba, Jordan's port and holiday resort, famous for beautiful coral reefs. There is time to relax on a local beach with transport and entrance included. You can add to the experience with optional snorkelling and lunch packages which your leader will explain. Please note there is a cost for these extras. There are several good restaurants in Aqaba for our evening meal together.La Costa Hotel (4-star) or similar

After breakfast, drive from Aqaba to Amman to explore the ancient city. Amman has served as the modern and ancient capital of Jordan. It is one of the oldest continuously inhabited cities in the world, with a 1994 excavation uncovering homes and towers believed to have been built during the Stone Age, circa 7000 BC. The earliest written records refer to the city as Rabbath Ammon, the capital of the Ammonites in the 12th century BC. Later the city was named Philadelphia under the reign of Ptolemy Philadelphus 283-246BC. As one of the cities of the Decapolis under King Herod in 30BC major building works were conducted. The 6000 seated Roman Theatre on the citadel is testimony of Roman architecture, although extensively restored it remains a classic example. Also on Citadel Hill, just northwest of the Temple of Hercules, is the Jordan Archaeological Museum. This small museum houses an excellent collection of antiquities ranging from prehistoric times to the 15th century.  From here we head to the Roman Theatre in the old town. This evening your leader will arrange a group dinner for those who would like to join. Arena Space (4-star)or similar

Trip ends after breakfast in Amman.

Trip ends after breakfast in Amman.