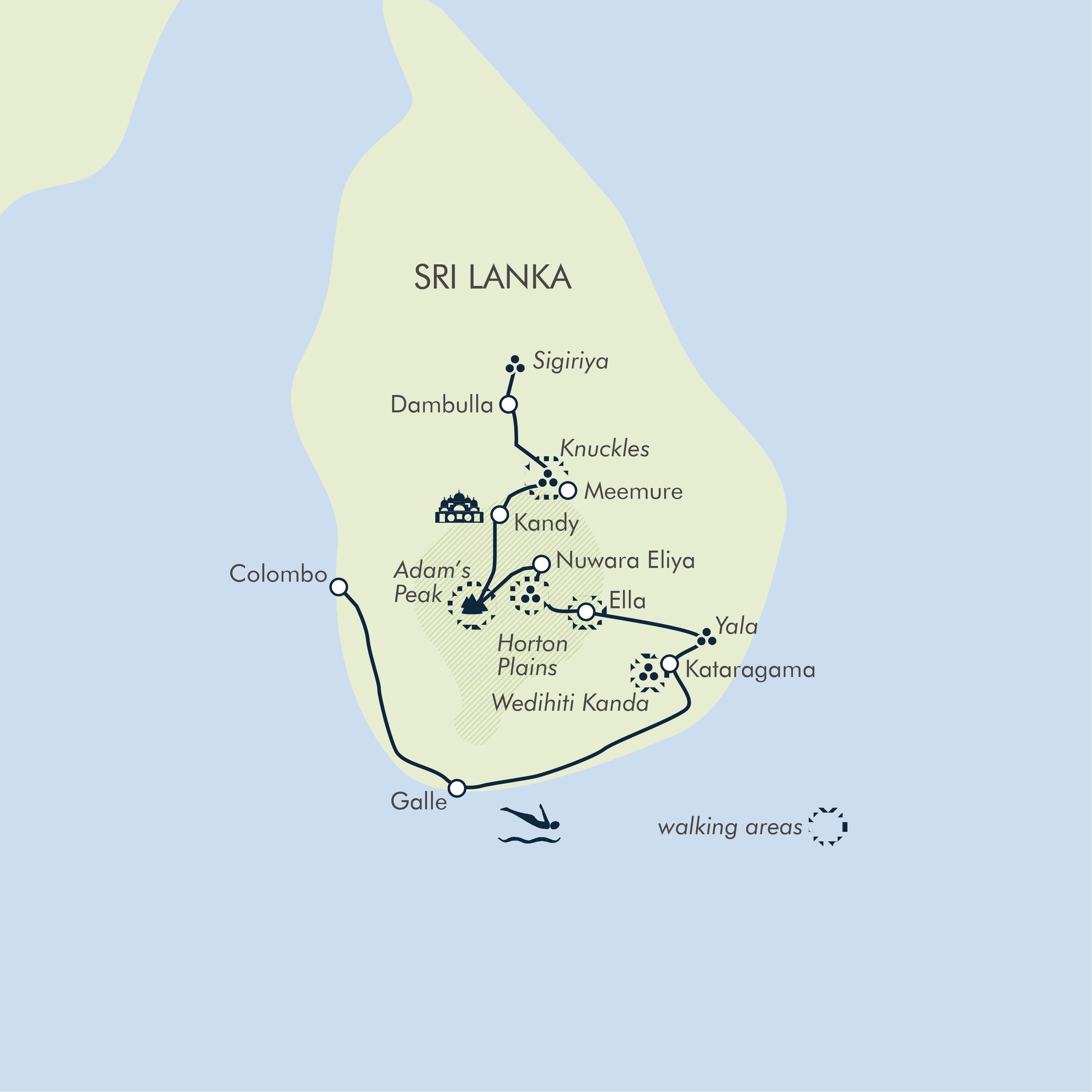 The group flight arrives at Colombo's Katunayake Airport and we transfer to our hotel at Dambulla (160km, 4hrs drive). Those not flying with the group can meet us at the hotel or the airport in time for the transfer. Please be aware if you are meeting the group at the airport for a transfer you might need to purchase a ticket outside to enter the arrivals hall. Pelwehera Village Resort or similar

After breakfast we visit the magnificent Cave Temple at Dambulla, one of the most impressive sights in Sri Lanka. There are colourful and very well preserved paintings and statues of Buddha inside the caves, which date back to the 1st century BC. We then have a short, gentle, warm up walk which takes us through villages and rice paddies and on towards Sigiriya, where we have lunch. In the afternoon we visit the imposing 5th century rock fortress, which rises 180m from the plains overlooking the surrounding countryside giving far-reaching views. Used as a safe haven from invaders, the route to the top is up a series of steep steps and gangways. From the base, where a moat surrounds impressive water gardens, we ascend 200m and pass an overhanging rock under which superb portraits of native maidens holding flowers and temple offerings still adorn the walls. Crowning the flat-topped summit are extensive remains of the King's Summer Palace from where there are breathtaking views of the surrounding countryside. The descent is much easier and we have a final 35 minute drive back to our hotel in Dambulla.Approximate walking distance 6km. Alt. gain 395m, Alt. loss 395mPelwehera Village Resort or similar

Drive to Illukkumbura; walk the Manigala Trail in the Knuckles Range.

The next two days takes us across the famous Knuckles Mountain Range. We start early with a three hour drive to the start of our walk, from where we begin with an easy descent past rice paddies and through the villages of Pitawala Patana and Etanwala. Descending to the river we cross a small bridge and start to climb up through more farmland. Finally emerging at the top of an escarpment we are rewarded with great views of the surrounding countryside. An easy trail takes us along the top of the escarpment to Manigala Top at 1115m, the high point of today. Next we descend to the Mahalakotuwa village area which leads to the main road and then it’s a 20 minute walk to our campsite by the river where we can bathe in the cool, refreshing water. Today is the longest walk and is approx. 7 hours walking, 15KM, Alt gain 900m, alt loss 100mAlt. gain 240m, Alt. loss 450m (Please note – occasionally due to high water levels we use an alternative campsite. The alternative campsite is about 40 minutes’ drive from Illikumbura).Camping at Knuckles with Eco Team or similar

We begin with a short half hour drive to the Narangamuwa Temple at Ranamuregama. We then pass rice paddies and coconut groves before entering a heavily forested area. The trail climbs gently for an hour and then levels out before undulating though this lush forest. The only sound we can hear is the birdsong all around us. Emerging from the forest in the village of Meemure, make sure to look back for a spectacular view of the peaks of Lakegala. Passing farms growing pepper and other spices, we come to a small tea shop where we have lunch. After lunch, we take a truck or rickshaws for a bumpy 90-minute ride to Corbetts Gap, a famous viewpoint. Our bus will meet us here for the 1.5hr drive to our hotel at Orutota overlooking the Victoria Reservoir.Oruthota Chalets or similar

To Kandy; visit the Temple of the Tooth.

A relaxing morning to enjoy the garden and pool at the hotel. Mid-morning we have a short 18km drive to Kandy and have the afternoon to explore. The town is located around a small lake and we can walk round to hopefully spot several varieties of water birds and large water monitors. Later we visit the Temple of the Tooth, which houses Sri Lanka's most important Buddhist relic - The Tooth of Buddha, which was taken from the funeral pyre in India in 543 BC and only found its way to Sri Lanka in the 4th century AD. There are literally hundreds of worshippers who visit the temple each day and in July/August the most spectacular ceremony takes place.Royal Kandyan Hotel or similar

This morning we drive to Dickoya (3 hours), where we stay for two nights in simple summer house, with wonderful view of the Castlereagh Reservoir. On a clear day we can see the outline of Adams Peak in the distance. In the pilgrim season (December-May) we have the day to relax or you can take a short walk around the lake (approx. 6km). We leave around midnight for the walk up Adams Peak (approx. 14km). This will take around 4 hours and we should reach the top, with the many pilgrims at sunrise. In the off season (May – November) we spend Day 6 (Day 7 Ex London) at Dickoya and can walk around the lake and on Day 7 (Day 8 Ex London) we will climb Adams Peak during daylight hours. Total accent 1211m, decent, the same. (Day 6: B) (Day 7: B,L)Summer House Hatton or similar

Drive to Nuwara Eliya; optional walk to explore the town

This morning we have a wonderful drive through tea plantation districts to Nuwara Eliya. This was the favourite hill station during the British era, situated in the cool highland air at 1890m and has a very British feel. Known locally as 'Little England' it is dotted with British style houses, hotels and a racecourse. There will be an optional walk into the hills around the town and also time to explore the bazaar.Windsor Hotel or similar

Today we drive to Horton Plains, a large plateau over 2,000m above sea level, overlooked by the second and third highest peaks in Sri Lanka. The scenery is beautiful and is best explored on foot. We trek through the rolling grasslands, seeing forest and unusual wildlife, such as the sambar deer and purple faced monkey, all the way to 'World's End', one of the most stunning sights in Sri Lanka. Here the ground drops 1050m to the plains below. We then catch the train from the highest railway station in the country; within two hours we’ve dropped from 1889m to 1097m. The train travels through the cloud forest into the tea plantations, the views are spectacular; we disembark at Ella.Hotel Country Comfort or similar

Daywalk around Ella; visit the Ravana Waterfalls and Ella Gap.

We drive to Kithalaella and climb up to a rocky area to enjoy stunning views of the waterfalls. Continuing on to Ella Gap, we have dramatic views of the coastal plain nearly 1,000m below. Almost the whole of the southern part of the island is in view and on a particularly clear day the shimmering silver of the ocean is visible (approx. 12km walk). We return in the late afternoon to our hotel in Ella.Hotel Country Comfort or similar

We now head south out of the hills to Tissamaharama down the plains stopping en route to visit the spectacular Ravana Waterfalls as well as the Kataragama Temple. This is a pilgrimage place for both Hindus and Buddhists, who come to worship here in the early mornings and evenings. Colourful and noisy, the temple is always busy. Tissamaharama will be our base for visiting Yala National Park. Its open undulating terrain made it famous for elephants for many years, but recently the park has become well known for leopard. The park, which is primarily shrub jungle with several salt and fresh water lagoons, has one of the highest concentrations of leopard per square kilometre in the world. We will have a game drive in the afternoon. (Please note that the sanctuary may be closed for 4-6 weeks from September to October allowing the park authorities to check the animals. In this instance we will go to an alternative area close by, usually the Udawalawe National Park).Chandrika Hotel or similar

Visit Kataragama Temple and walk around Tissamaharama lake; transfer to the
coast.

This morning we drive to the beautiful Tissamaharama Lake where we walk for approximately 3.5 hours (approx. 5km). This is an opportunity to see the day to day life of the local people as well as a range of birdlife. In the late afternoon we drive for approximately 4 hours to the coast.Insight Resort or similar

Free day to relax on the beach or optional activities including whale
watching (Nov to April).

Free day to relax on the beach or by the pool. There are also numerous optional activities including a boat ride through mangrove swamps to a cinnamon plantation, or from November to April you can go whale watching off Dondra Head. This is one of the best places in the world for seeing Blue and Sperm whales.Insight Resort or similar

To Galle; transfer to Colombo.

We set off today and drive along the coastal road to the historic port of Galle, which dates back to the 17th century, and now a UNESCO world heritage site. On the way we stop at a small folk museum inspired by the local writer Martin Wickramasinghe. The museum is a typical house from the Koggala region and is set amongst beautiful gardens. We continue along the expressway to Colombo reaching our hotel in the late afternoon (the drives takes around 2-3 hours, plus stops).Hotel Mirage or similar

If you are travelling on the group flight we will have a morning transfer to the airport for the daytime flight to London. The arrangements for those not flying with the group ends after breakfast.