Explore the Holy Land's greatest religious sites and inspiring landscapes; roam through the historical streets of Jerusalem and dip in the saline waters of the Dead Sea at the lowest point on earth. Spend a night under the stars in a traditional Bedouin-style desert camp before ascending Masada's Sky Fortress at sunrise, and taste delicious Middle Eastern cuisine as you travel through the country. Tel Aviv - Discover the cosmopolitan atmosphere of Israel's second city on the coast of the Mediterranean Biblical Landscapes - See world famous holy sites including the Sea of Galilee and Jericho Bethlehem - Visit the biblical birthplace of Jesus Christ and the Church of the Nativity 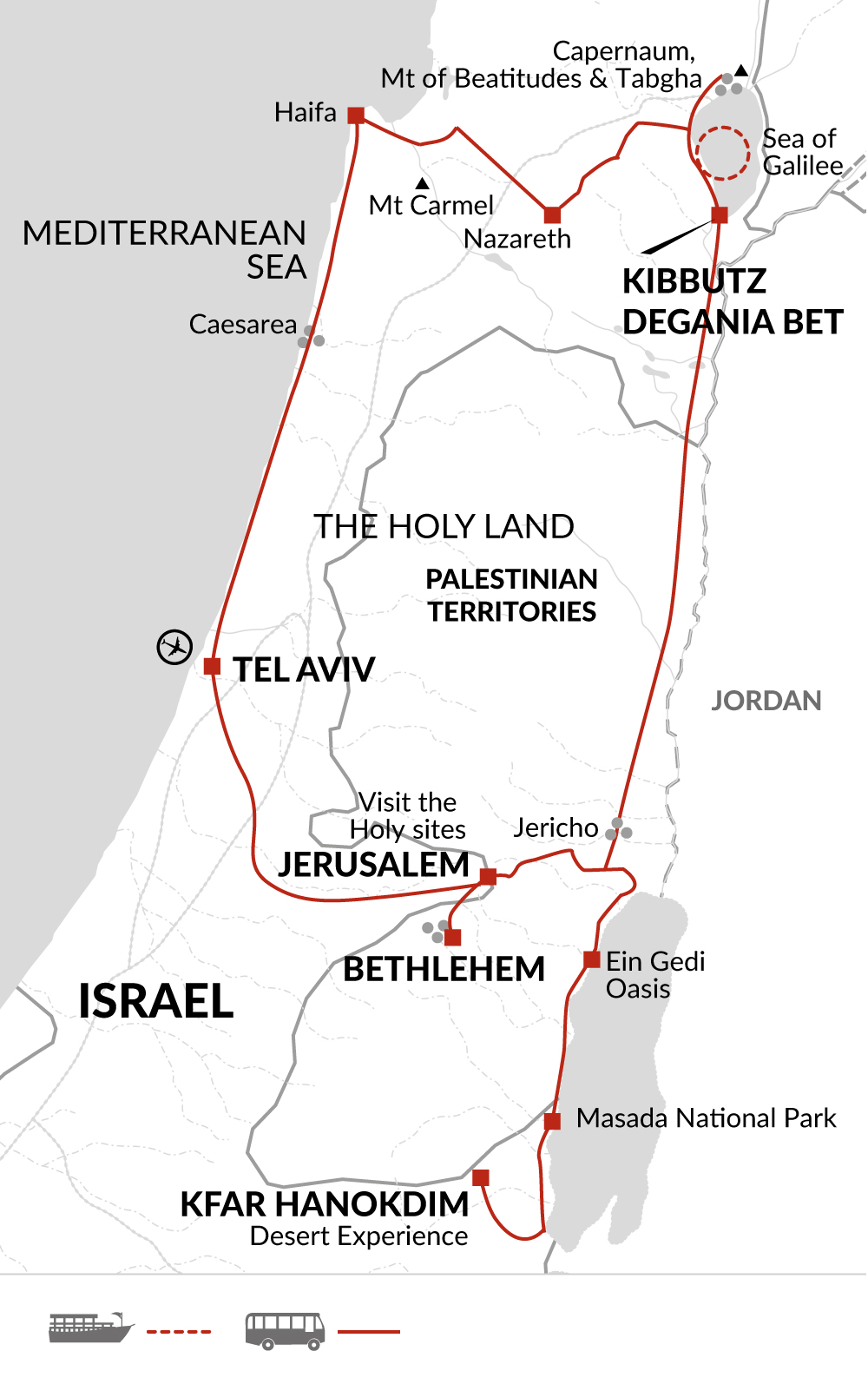 Arrive in Tel Aviv. For those arriving on time our Leader plans to meet you in the hotel reception at 7pm for the welcome meeting and for those that wish, there is the chance to go out for dinner. There are no other activities planned today, so you are free to arrive in Tel Aviv at any time. If you would like to receive a complimentary airport transfer today, you'll need to arrive into Ben Gurion Airport (TLV), which is around 30 minutes' drive. Should you miss the welcome meeting, your Leader will inform you of any essential information as soon as you catch up. If you arrive early today you can spend some time exploring the city that sits proudly on a 14km stretch of beach along the Mediterranean Sea, and the city is informally broken into two distinct areas; the modern city with skyscrapers, bars and a wide beach boulevard and then the historic port city of Jaffa featuring narrow walkways and many little places to try delicious hummus. A walk between the ancient and modern is really enjoyable along the beach paths.

Israel's second largest city, Tel Aviv was originally founded at the beginning of the 20th century on the outskirts of the old port city of Jaffa but as Tel Aviv has grown Jaffa has immersed into the city boundaries too, creating a city with wonderful contrast. After breakfast, we'll start our walking tour of Tel Aviv to see examples of the impressive European-influenced 1930s architecture, the fashionable neighbourhood of Neve Tzedek and the charming, ancient port area of Jaffa. Around mid-morning we'll travel to the archaeological park of Caesarea that stands about one hour outside of the city and boasts Roman ruins including an amphitheatre, pillars and frescoes dating back some 2,000 years. We travel along Israel's northern coast and journey to the historic city of Haifa, where we take in the panoramic views from the slopes of Mount Carmel and see the Bahai Gardens. Finally late this afternoon we will make our way to Kibbutz Degania Bet about 90 minutes north-east, near to the Sea of Galilee. In Israel today kibbutzim communities have evolved from when they originally began in the early 1900s, however, the values of fair pay, shared commodities and everyone being equal remain. There are strict rules on who can join a kibbutz community and many kibbutz have their own speciality when it comes to making money such as agriculture, innovation or technology. This evening, we'll eat in the communal dining hall with the residents.

Today we visit the Evangelical Triangle to the north of the Sea of Galilee, made up of three key religious sites - Tabgha, Capernaum and Mount Beatitudes. We'll spend around 30 minutes at Tabgha, where it is said one of the most significant events of the New Testament took place - the feeding of the 5,000. We will visit the Church of the Multiplication of the Loaves, the Church of the Primacy of St Peter before visiting the Mount Beatitudes. We'll also spend a short while in Capernaum, the birthplace of St. Peter and the site where it is believed Jesus first started his ministry. Later this morning, we'll take a boat trip out onto the waters of the Sea of Galilee. The exact running order of this morning will be decided by our leader on the day depending on weather and visitor numbers to ensure the best possible experience. This afternoon we will travel to Nazareth, Israel's largest Arab city. Sprawling down into the valley, the city is densely populated and feels a country away from Tel Aviv. The population is majority Arab, the city is humming with life on the Sabbath unlike many other cities in the country, and it's the best place to taste the Middle Eastern sweet treat of knafeh! The city is also home to the iconic Basilica of the Annunciation, where it is said that Angel Gabriel told Mary she would conceive and give birth to the Son of God. We'll also visit St. Joseph's Church before taking some free time to explore. This evening we'll have dinner at the kibbutz.

After an early breakfast this morning one of the kibbutz residents will take us on a guided tour of their community so we can begin to understand their way of life and see some of the landmarks including the school and museum. There may even be time to pop into the chocolate factory and meet the chocolatiers. Around mid-morning we will travel south for about one hour into the Jordan Valley, crossing the border into the West Bank. Our first stop will be in Jericho, where our leader will swap with a local Palestinian guide for a tour of the city. Lying amidst the hotly contested settlements of the West Bank, Jericho was the first city to fly the flag of the newly formed Palestinian state and its history stretches back some ten millennia. We will ascend via cable car to visit the Monastery of Temptation and it is here that Jesus was tempted by the devil during his 40 day fast. As well as the religious significance, the site also offers fantastic views over the valley below. We'll continue south to Ein Gedi National Park and visit the excavation site of the sixth-century synagogue with its intricate mosaic floor. After we leave here, there may be the opportunity to float in the saline waters of the Dead Sea (depending on weather and daylight hours) before we leave the West Bank and travel to Kfar Hanokdim. Situated peacefully in the Kana'im valley desert area, Kfar Hanokdim is our Bedouin-style home for the night. This large desert camp was founded nearly 30 years ago by a Bedouin family to offer a true desert experience to visitors, reflected in the traditional foods served and natural materials used to build and decorate each area of the camp. Tonight we will eat a Bedouin feast and spend time around the campfire under the stars. We'll sleep in shared sukkahs (guest lodge); authentic sleeping huts made from woven goat's hair material, with wooden floors and up between four - eight beds. All bedding and towels are provided, and there is communal shower facilities.

We'll have a very early start this morning to make our way to Masada in time for sunrise. From the camp we will drive for 15 minutes to Masada's western observation point and walk up the Roman ramp to the Sky Fortress. The ramp is a 1km incline on a well-maintained path, and once at the top we'll explore the legendary fortress city of Masada, the last stronghold of the Zealots against the Romans during the First Revolt in AD 70. Steeped in history and shrouded in mystery our leader will tell the tales of this citadel, and there will be time to take in the stunning views of the surrounding desert in the early morning light, including the mountains of Moab and the Dead Sea. We'll return to the camp for breakfast this morning and there will be the opportunity to ride camel in the desert for those who want to. Later this morning we will depart Kfar Hanokdim and drive to Ein Gedi Nature Reserve. Here we will take an hour long hike to a spring to enjoy this natural oasis in the middle of the desert. Later this afternoon we will travel to Jerusalem, via the West Bank, our base for the next few nights; this evening there is the option of a light and sound show at the Tower of David.

We'll have an early breakfast this morning before departing by bus for Bethlehem, about one hour's drive away. Along the way we will pass the Knesset - Israel's Parliament - and the Supreme Court. Shortly before arriving to Bethlehem we will cross the border back into Palestinian Territory and our leader will swap with a local Palestinian guide, who will lead us around the town that is an icon in religious history as the biblical birthplace of Jesus Christ. The bus will park in the central bus station and we will continue on foot up a cobbled street to the Church of the Nativity before continuing by bus to the Shepherd Fields and the Milk Grotto. Please note, Bethlehem can become very busy with tourists and pilgrims therefore we are unable to guarantee the time access inside each of the sites. Queueing times are unpredictable and areas have little shade so please be prepared for long waits if you wish to see inside the Church of Nativity and the Milk Grotto. Later this afternoon we will return to Jerusalem and head to the old city for a guided tour. The oldest signs of settlement in Jerusalem date back 6,000 years ago but it's believed that historic Jerusalem as we know it now was founded around 4,000 years ago. The old city is a maze of narrow alleyways and cobbled streets lined with stalls, hole-in-the-wall eateries and colourful front doors, hiding religious treasures deep within. Late this afternoon we will aim to be at the sacred Western Wall to observe Shabbat services if time allows.

Today will be packed as we endeavour to take in Jerusalem's highlights with our leader. Jerusalem's history is one of passion, religion, war and controversy; destroyed twice, besieged 23 times, attacked 52 times and recaptured 44 times. This morning we'll start with a drive up to the Mount of Olives up on a ridge above the city it is from here that it's said Jesus ascended to heaven and this spot offers a superb view across the Old City. From the top of the mount we will descend to the foothills to visit the Roman Catholic Dominus Flevit Church, where we're told that Jesus envisioned the destruction of Jerusalem and wept. On our way back towards the city we'll also see the Garden of Gethsemane and the Church of All Nations. Around late morning, we will return to the Old City where we'll continue exploring all afternoon on foot. Jerusalem is unique in that it is held sacred by the three great monotheistic religions of the world, Christianity, Islam and Judaism. Passing through the winding, cobbled lanes overflowing with street vendors and shops, we walk along the Via Dolorosa, traditionally believed to be the route taken by Christ on the day of his execution. We will follow the Stations of the Cross to the Church of the Holy Sepulchre, the holiest site in Christendom and the reputed place of the crucifixion, burial and eventual resurrection of Jesus Christ. Finally we head up onto the slopes of Mount Zion, where we visit the tomb of King David, the beautiful Benedictine Abbey of the Dormition and the Cenacle, which since the 4th century has been identified as the site of the Last Supper. After a packed day of exploring we'll return to our hotel for time to freshen up before our last evening of the trip.

The trip ends this morning after breakfast. All customers departing from Ben Gurion Airport today will receive a complimentary airport transfer.