Landscapes of Matera and Puglia Cycling

From Matera, explore the largest natural park in Italy and onward south to Puglia 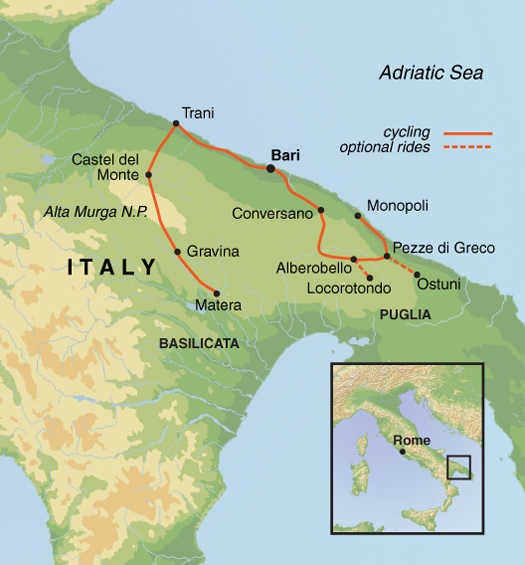 Arrive in Matera, one of the oldest inhabited cities in the world.

Enjoy the stone city of Matera, named the European Capital of Culture in 2019. Situated in the Basilicata Region, stroll through its beautiful Palaeolithic cave dwellings, intricate cathedrals and museums.

Leave Matera and cycle a few kilometres to enter the beautiful region of Puglia. Ride on gentle slopes towards Gravina, one of the most important Roman cities along the Appian Way, and Altamura, located on the hills of the Murge plateau.

Today, our route winds across the largest natural park in Italy - the Alta Murgia National Park. Our final destination is an iconic castle in the southern region, commissioned by Frederick II, with its unique octagonal structure making it worthy of the UNESCO World Heritage list.

Today's ride continues though the Alta Murgia National Park, with a pleasant descent towards the adriatic Sea and Trani, one of the oldest and liveliest cities on the Apulian coast. Known as the 'Pearl of Pugila', the city is characterised by its breath-taking cathedral that sits right on the water's edge. Afterwards, wander around its Jewish quarter, hidden between it's glossy limestone streets.

Explore the historic town centres of Bisceglie, Molfetta and Giovinazzo, admiring their Romanesque style architecture. Arrive in Bari, a bustling, coral-fringed port town and ride along one of the longest promenades in the Mediterranean to the old city.

Spend the day exploring the capital of the region Puglia, walking the narrow lanes of the Vecchia Bari (Old town), admiring the 11th century Romanesque Basilica di San Nicola (also know as Santa Claus) which was specially built to house his remains. Or head to the old port for a stroll along the seafront, where in the mornings you can see fishermen landing in small wooden boats with their catch - and then selling it directly on the waterfront.

Leave Bari pedalling for several kilometres on the southern side of the sea, up to Baia San Giorgio, where San Nicola (Santa Claus) landed in Europe, the black Saint bridge between Eastern and Western Christianity. Then follow the coast and up to Torre a mare and then go a few kilometres inland, to Rutigliano, a beautiful town known for the manufacture of terracotta artefacts, and from there you cross peaceful countryside planted with grapes and cherries to Conversano.

Today's cycling takes you through the rolling hills of the Itria Valley where the air is perfumed with wild mint and herbs. Stop in the little towns of Putignano and Noci, and their characteristic whitewashed houses and narrow alleyways. It's then off to unique Alberobello and its plethora of trulli houses, the architectural symbol of the region. On arrival you'll be met by the staff, will show you to your own private trullo house.

Spend today roaming around the historic centre, navigating your way through narrow streets, kitsch souvenir shops and tasting local delicacies. Or maybe visit the Museum of the Territory to discover the history of this unique UNESCO World Heritage Site. Alternatively, a circular cycle route (45km / 29mi - route directions provided) takes you deep into the Itria Valley to visit stunning Locorotondo, with wonderful panoramic views across the valley. Continue on to Martina Franca, a must-see town given its marvellously intact historic centre, beautiful Baroque architecture, and stunning palaces.

You'll spend a long downhill run with panoramic views of the Adriatic coastline and the lower fertile plains. This incredible descent will bring you down towards. Chapter and finishes through a patchwork of almond orchards, olives groves, vineyards and gloriously coloured fields of fresh tomatoes and peppers.

Today you could just relax by the hotel pool, or cycle to the nearby beach. For the more energetic, a circular cycle ride (48km / 30mi route directions provided) - taking notes to charming Ostuni whose whitewashed arches and houses are neatly piled like sugar cubes on hills rich in olive groves and vineyards!

This morning you leave the farm and head to the Adriatic coast on a gentle flat route. You will cycle past the colourful fishing village of Savelletri, a perfect stop for an authentic Italian espresso or indulge in a delicious seafood lunch. Your ride will continue past the archaeological site of Egnazia, once the location of a Greek-Roman town, dating as far back as 4 B.C. Arrive in the picturesque coastal town of Monopoli in time for a stroll before choosing your evening restaurant from one of the many eateries in the heart of the old town.

On your last day you're spoilt for choice: explore Monopoli and its beautiful cathedral, stroll along its narrow streets flowing around its delightful port and enoy a relaxed lunch in one of the many outstanding seafood restaurants. Or you can explore a stretch of the Adriatic coast, perhaps the most beautiful of all by cycling to the north of Monopoli, coming out of the port and after a few coves and a beautiful medieval tower overlooking the cliff, arriving at Polignano. Its hamlet, which can be reached by bike through a spectacular bike path, in some places almost suspended over the sea, is positioned on the edge of a high cliff (from here the daring athletes who participate in the world diving championship also plunge from great heights). Polignano is then the city of ice cream and the country that gave birth to Domenico Modugno (mister 'Volare'). A few kilometres further along the coast we come to the village, the marina and the abbey of San Vito: an imposing and spectacular medieval building overlooking the sea. From here you go back, pedalling inland, through vegetable gardens and olive trees.