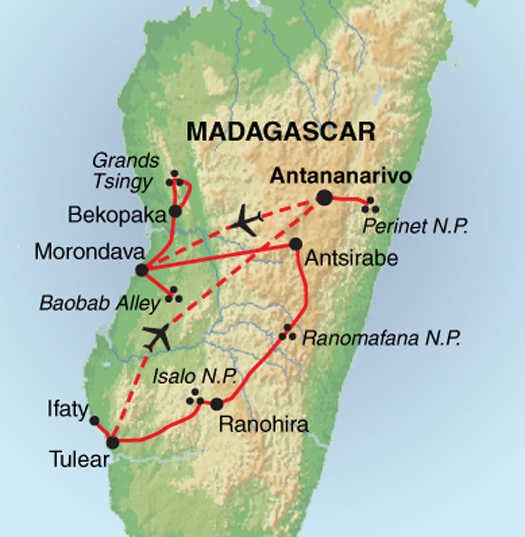 There are no included activities today so you are free to arrive at any time. Accommodation: Residence Lapasoa or similarStandard Hotel

This morning we will embark on a short city tour of Tana by bus. With its bustling markets and ancient town on a hill with freestone churches and ancient royal places, it is unique among the world’s other capitals. Built around Anosy Lake, Tana offers much of interest set against a backdrop of terracing with outstanding views from the Queen's Palace.We will arrive in Andasibe around 3pm and we will then visit the Vondron’olona Miaro Mitia Ala Reserve. This is a community run reserve where you are able to see several species of lemurs and birds. The reserve is an untouched paradise for endemic animals and plants. There are groups of Indris which we hope to see here in their natural habitat, and their white-headed relatives, the Diademed sifakas, jump between the tree tops.  For reptiles and amphibian lovers, the reserve offers countless frogs along its crystal clear river and several amazing chameleons can be found in the forest.In the early evening we take a twilight/nocturnal walk, looking out for the nocturnal species of lemur as the torchlights pass by their eyes. Accommodation: Sahatandra River Hotel or similarStandard Hotel

Today we will explore the park and go in search of wildlife on a 4 hour walk in Andasibe National Park, also known as Perinet. The park is home to the teddy bear-like Indri, the largest of Madagascar's lemur species, as well as other forms of flora and fauna and a wide array of bird life. Listening to the piercing yet melancholy cry of the Indri in the morning is an evocative sound and for those who are prepared to follow them through the thick rainforest, the reward is often a close-up view of these beautiful creatures. A group of five Diademed sifaka have recently been re-introduced to Andasibe from Mantadia, and if we are lucky, we may spot one of these unusual creatures.In the afternoon we return to Madagascar’s capital, known simply as 'Tana' to the locals. Accommodation: Au Bois Vert Hotel or similarStandard Hotel

We depart early today to catch a flight west to the coastal town of Morondava, known for having one of the finest climates in Madagascar. This afternoon, we will pick up the 4WD vehicles and then visit the famous ‘Alley of Baobabs’. We then we drive to Kirindy dry forest reserve where we spend the night. Accommodation: Gite de Kirindy or similarStandard Hotel

Drive to Bekopaka, with a visit to Kirindy dry forest reserve.

Today we visit the Kirindy Reserve, which is home to the giant jumping rat, seven lemur species, and the Fossa. Then we travel approximately 9 hours on a dirt road to Bekopaka. We travel past baobab forests, desert, and local villages, and cross the Tsiribihina river by local ferry boat. The western landscape is arid but has a beauty all of its own. Accommodation: Olympe de Bemaraha or similarStandard Hotel

We depart early this morning to the amazing Grands Tsingy. A UNESCO World Heritage Site since 1990, the area has unique geography, well-preserved mangrove forests. The Grands Tsingy is famed for its pinnacles, a forest of limestone pillars; some of its needles are several hundred metres high! The karst landscape and deciduous forest are a refuge for rare and endangered species and in the park there are over 11 species of lemur, 90 species of bird and 50 types of reptile, some of which we might be lucky to spot on our hike. In the afternoon we will head back to Bekopaka and relax at the hotel or enjoy a swim at the hotel pool. Please note that while our time in this area is a real highlight for most, this is a demanding walk and those suffering from vertigo and claustrophobia may find parts of the walk challenging. In some places we will go through caves and narrow chasms; harnesses are used for the more challenging parts of the climb for safety reasons. Accommodation: Olympe de Bemaraha or similarStandard Hotel

4WD to Morondava; sunset at 'Alley of Baobabs'.

After breakfast we will head back south by 4WD vehicles to Morondava by road and ferry. The journey will take us approximately 12 hours. We will pass by the Sakalava tribe tombs along the way – specially known for the very unusual paintings and carvings that decorate the outside of each tomb. We will stop at the famous ‘Alley of Baobabs’ again where we plan to spend sunset. This is the best time to see these amazing trees as the colours at this time of day are spectacular, making for a perfect photo opportunity. After sunset we spend the night in Morondava. Accommodation: Renala au Sable d’Or or similarStandard Hotel

Today is a long travel day through the fascinating scenery of Betsiriry Plateau, some plains of savannah, and intercepted by some villages. We arrive at our destination by early evening. Antsirabe is at an altitude of 1500m and has a cooler climate. The warm springs and thermal baths here were a real draw in the 19th century. Accommodation: Chambres du Voyageur or similarStandard Hotel

This morning we depart early. We will do a short rickshaw tour along Independence Avenue then do a sightseeing tour of Antsirabe, including a visit to some craft centres. From here we continue to drive to Ranomafana. Parc National de Ranomafana (approximately 40,000ha), with its rain forested hills and abundant wildlife, has long been considered one of Madagascar’s highlights, and is one of the most visited of the country’s national parks. Its entrance lies about 7km from Ranomafana village. Altitude in the park ranges from 800m to 1200m. In addition to its densely forested hills, Ranomafana’s terrain is characterised by numerous small streams, which plummet down to the beautiful Namorona River. Although much of the region has been logged, the easternmost part of the park retains relatively large areas of primary forest. Accommodation: Centrest Hotel or similarStandard Hotel

Today we spend the morning (approximately 5 hrs) exploring Ranomafana National Park. We hope to spot Golden bamboo lemurs who are unique to this park, as well seeing other lemurs such as the Eastern woolly lemurs, the Red bellied lemurs, the Grey bamboo lemurs, and the Red-fronted brown lemurs. This park is also home to other mammals including tenrecs, bats and some of the carnivores such as mongoose and the Malagasy striped civet.In the afternoon, we will visit the Ranomafana Village, where we will see typical Tanala tribe houses as well as the public thermal bath.The evening is spent on a night walk along the roads in the hope of spotting some of the nocturnal lemurs, chameleons and other animals.Accommodation: Centrest Hotel or similarStandard Hotel

Today we drive to Ranohira. The scenery changes dramatically as we head to the small town of Ranohira, a journey of approximately 11 hours. We stop in Ambalavao to visit Anja National Park along the way - a small reserve where several families of Ring-tailed lemurs can be seen in the wild. Accommodation: Isalo Ranch or similarStandard Hotel

We spend the day exploring Isalo National Park. Isalo is a vast region of wind-polished and water-scoured rock towers, deep canyons, gorges and oases often described as Eden. During our time here we will go walking in the magnificent Canyon des Makis in search of cheeky Ring-tailed lemurs and the Verreaux's Sifaka. We also visit the 'Piscine Naturelle' (natural swimming pool), a beautifully lush spot within an arid landscape, where we can swim and relax. Perhaps the magic is just to soak up the sheer beauty of the park, the combination of coloured eroded rock forms, strange plants and enveloping silence make this one of the most captivating places in Madagascar. (Please note that Isalo is a big national park and there will be a certain amount of driving involved today. Driving to the Canyon des Makis takes around 1.5 - 2 hours). Accommodation: Isalo Ranch or similarStandard Hotel

To west coast and beaches; overnight in Ifaty beach.

We drive to Tulear, among the dry forests of the west and the spiny desert of the south, and we pass both the 'Mahafaly tombs' and the 'Antandroy tombs', briefly observing their ornate decorations. Antandroy and Mahafaly are reputed to be the most impressive of all Malagasy tombs, with the Antandroy tombs being large and brightly painted, relating to the life story and wishes of the deceased. They are also topped with zebu skulls which were sacrificed during the funeral festivity - a ceremony of great significance. Mahafaly tombs are characterised by their wooden sculptures known as 'Aloalo', relating to the life of the deceased and their unfulfilled dreams, as well as their rank within the clan. After a brief stop in Tulear, we continue past the coastal town of Ifaty to Ifaty beach where we spend the night. Accommodation: Hotel de la Plage or similarStandard Hotel

Free time for relaxation or optional activities at Ifaty beach.

Today we have a free day. Running all the way around the south-west Malagasy coastline, Ifaty beach lies on one of the world's largest barrier reefs and is an excellent venue for scuba diving. Between late June and early September, whales can be observed off Ifaty's beautiful white beaches and the offshore islet of Nosy Ve is a terrific place for snorkelling. Protected by coral reefs, the beach and waters beyond the hotel offer a welcome place to rest. Accommodation: Hotel de la Plage or similarStandard Hotel

Fly to Antananarivo and end.

Today we transfer to Tulear airport for our flight to Antananarivo which will arrive in the afternoon. Depending on the flight schedule, you may have free time to explore Antananarivo on your own. Those on the group flights will be transferred to the airport in the late evening for the very early flight the next morning. We will have access to day-use rooms before the flight.Please note that flight delays on the internal flight are not uncommon – we strongly advise not to book your international flights to depart before midnight.