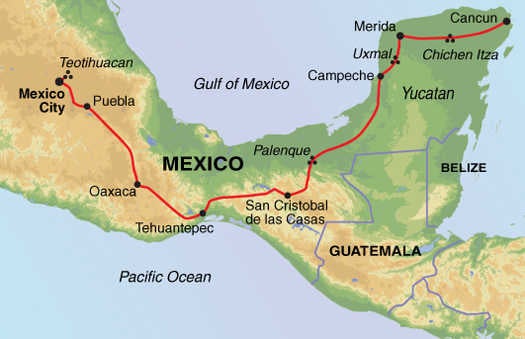 Those on the group flights normally arrive in Mexico City in the evening. Land only passengers can arrive at any time.Hotel Royal Reforma or similar

Today we head out for a day of exploring the bohemian side of Mexico City.We start off by making our way to the south of the city and a particular house hidden behind cobalt blue walls known as Casa Azul. This is where the acclaimed artist Frida Kahlo was born, grew up and, eventually, lived with her muralist husband, Diego Rivera until she died in 1954 at the age of 47. Now a museum, the colonial house, set around a luxuriant garden, doesn’t only showcase the collections and personal effects of the two great artists but is a window into the life of affluent Mexican bohemians in the first half of the 20th Century.Next, we visit the quaint neighbourhood of Coyoacan (meaning place of coyotes) with its pebbled streets, colonial churches, bustling little markets and quiet squares. This area was inhabited before the arrival of the Spanish and it is said that the conquistador, Hernan Cortes, made this the first capital of New Spain.Finally, we enjoy a relaxing ride on a pre-Hispanic boat along the peaceful waters of the Xochimilco Canals. These scenic waterways would have been used by the Aztecs and today see us enjoying a relaxing journey past floating gardens and little floating kitchens selling local food.We will return to our hotel in the late afternoon.Hotel Royal Reforma or similar

The ancient city of Teotihuacan reached its zenith around 1,000AD when it was the 6th biggest city in the world with a population of about 125,000. Amongst the avenues and structures are the pyramids of the Sun and the Moon, the 3rd and 4th largest in the world. We explore this impressive archaeological zone with an expert local guide to unearth some of the site’s secrets.Returning to Mexico City, we visit the historic centre on a walking tour based around the Zocalo (main square) and the Cathedral Metropolitana.  Our exploration will start in the capital’s main square, known as the Zócalo, but officially named the Plaza de la Constitución. Considered one of the biggest squares in the world, and just as it was an important gathering place for the Aztecs, it remains so in modern day Mexico, often hosting book fairs and concerts.  On the North side of the Zócalo is the Metropolitan Cathedral. The largest Cathedral in the Americas, it was constructed over the Aztec temple, the Templo Mayor, as a sign that the Spanish were now in power.  Our tour finishes outside of The "Palacio de Bellas Artes".  Construction of this massive neoclassical building began in 1904, on the remains of the Santa Isabel convent, under the Italian architect Boari. It has an art nouveau style and its facade is made of marble from Carrara. Hotel Royal Reforma or similar

Museum of Anthropology and History and Palacio Nacional; on to Puebla

Before leaving Mexico City behind we visit the Museum of Anthropology and History with its impressive collection of artefacts from Mexico’s many civilisations. We continue to The Palacio Nacional*, which not only contains the offices of the President, the Federal Treasury and the National Archives but also murals depicting pre-Hispanic life and a large mural filling the central stairway depicting the entire history of Mexico from the conquest on. Starting our journey south we head towards the city of Puebla (about 2.5hrs). In the late afternoon we arrive in Puebla de los Angeles, the City of Angels – so called because of a legend that claims angels came down from heaven to place the cathedral’s bells in the towers when builders were unable to do so. The colonial city is known for its traditions, especially its handicrafts, including blue-and-white pottery, and its cuisine that is some of the best in Mexico.*Please note that the Palace may occasionally close at short notice due to official events involving the President.Hotel Colonial Puebla or similar

Puebla city tour and on to Oaxaca

We spend this morning discovering the city of Puebla which has been given UNESCO World Heritage Site for its colonial architecture. We visit the Patio de los Azulejos and the ex-Convent of Santa Rosa, both of which provide classic examples of how ‘talavera’ tiles were incorporated into buildings, inside and out. Early settlers who came from Talavera de la Reina in Spain introduced these tiles and associated ceramics. Today the glazed pottery has become synonymous with Puebla.After our city tour we continue our journey and drive towards another Mexican World Heritage City, Oaxaca (about 4.5hrs). With a colonial centre of shaded pedestrian streets, bright, clear light, indigenous traditions and a creative atmosphere, Oaxaca has attracted and inspired many artists and artisans alike.The city boasts such sights as the beautiful zocalo (main square), the Cathedral and the vast Convento de Santo Domingo, along with museums, fascinating markets and charming inns.Hotel Oaxaca Real/Hotel Aitana or similar

Our next exploration of Mexican history takes us to the Zapotecan site of Monte Alban. Whilst the name dates back to a Spanish landowner in the 16th-century, previous names come from the Mixtec word ‘Sahandevul’ meaning ‘At the foot of the Sky’ or the Zapotecan ‘Danibaan’ meaning ‘Sacred Mountain.In 500 BC the Zapotecans moved into the Oaxaca region and began the monumental task of levelling the top of a 1,600m high mountain that intersects and divides three valleys. Here they built the city of Monte Alban with a maze of subterranean passageways, rooms, drainage and water storage systems.We later return to Oaxaca and explore the cobbled streets and vibrant squares and churches of the historical town. We also visit the Museum of cultures Santo Domingo.Hotel Oaxaca Real/Hotel Aitana or similar

Oaxaca is possibly the most famed region in Mexico for its cuisine and we get more acquainted with it as we head for a cooking class, learning dishes that can easily be recreated at home. The exact menu can change but we generally learn how to make two types of tortilla, three different salsas, guacamole, mole, a starter, a soup, a desert and a drink. We visit a local market where different ingredients are showcased and explained before returning to the restaurant for our class and a succulent lunch.The afternoon is free to wander around Oaxaca on your own.Hotel Oaxaca Real or similar

Teotitlan del Valle, Mescal tasting and on to Tehuantepec

A short distance from Oaxaca is the village of Teotitlan del Valle known for its colourful, hand-woven rugs and our first stop today. From here we continue to the Don Agave distillery to taste some mescal. Distilled from agave plants, mescal is different to tequila and is most popular in the Oaxaca region. After the tasting we drive to Tehuantepec where we spend the night (total drive time is about 7 hours plus stops)Hotel Calli or similar

Drive to San Cristobal (about 6hrs plus stops).One of Mexico's most popular cities with visitors, San Cristobal de las Casas is filled with cobbled stoned alleyways of whitewashed buildings with red-tiled roofs that give onto plazas and picturesque arcades.Arriving in San Cristobal in the afternoon, we have a short orientation tour of the historic city before checking into our hotel.Hotel Casa Mexicana or similar

Today is a free day to explore San Cristobal at your own pace. Wander the colonial streets, take in the lively cafés, or buy handicrafts produced by the local Tzotzil indigenous groups with their different colourful dress. It’s also possible to do an optional boat trip through the Sumidero Canyon and/or visit one of the traditional Mayan communities who live in the villages surrounding the city (see money section for prices).Hotel Casa Mexicana or similar

To Palenque via Agua Azul

The road we take towards Palenque is very windy but picturesque. En route we visit the waterfalls of Agua Azul (after about 5hrs driving plus stops). Agua Azul is a group of beautiful waterfalls that create wonderful natural pools and has been a protected area since 1980. Due to the strong and unpredictable currents we do not recommend swimming at this location.Following a stop at the falls it’s a further 2.5hrs to the town of Palenque, named after the nearby impressive ruins.Hotel La Aldea del Halach Huinic

Palenque Ruins, on to Campeche

Emerging from the jungles of the Chiapas’ low-lying hills is one of Mexico’s most impressive ruins: the Mayan site of Palenque. The temples, sanctuaries and pyramids, with their sculptured walls and ceilings are some of the best-preserved and finest examples of Mayan buildings despite the city-state having peaked over 1,300 years ago in the 7th century.We explore this magnificent site before continuing on the road towards the Yucatan Peninsula and the Caribbean town of Campeche (about 5hrs plus stops).Yet another UNESCO World Heritage Site, the colonial town’s best feature are its impressive city walls built to protect it from the constant attacks by English and Dutch buccaneers and pirates during the 16th and 17th centuries.Hotel Lopez or similar

About two hours drive from Campeche is our second Mayan site: Uxmal. Quite open, it is in contrast to the jungle-ruins of Palenque we visited yesterday. This site, which dates to the late classic era (500-800AD) and features the Pyramid of the Magician; the Nunnery Quadrangle with long, elaborately carved facades; and a ball court where a traditional ball game was played, sometimes ending in human sacrifice.Having worked up an appetite we have lunch at a local Mayan family restaurant. Here we get to eat Pollo Pibil and Cochinita Pibil – slowly cooked pork and chicken. The meat is roasted for about 5hrs along with achiote paste and wrapped in banana leaves. This is a typical Yucatan dish and representative of the local cuisine.After lunch it’s about 1.5hrs drive to Merida. A number of the city’s buildings, including the cathedral, were built using Mayan stones found on this site and, along traditional colonial architecture, features 19th century houses built in a French style.Arriving mid-afternoon we have a walking tour of Merida, returning later to enjoy the main square which is particularly delightful at night.Hotel Caribe or similar

Our first stop is at the traditional Mayan village of Tixkokob where local families practice the age-old craft of hammock weaving.After learning about how hammocks are made we continue to the ‘magic town’ of Izamal. Once a Mayan settlement, the name means ‘Place of the God of Medicine’. The town is covered in buildings painted yellow and white and is known for the 16th century Franciscan monastery built on top of the base of a huge Mayan pyramid (which was probably once larger than the Castillo in Chichen Itza).From here we transfer to Chichen Itza, possibly the best known and most impressive of all Mayan sites (total drive time of about 3.5hrs plus stops).Hotel Chichen Itza or similar

Our final day starts with a visit the most famous Mayan temple city: Chichen Itza. Having spent the night near to the site means we can get in nice and early before the hordes of day-trippers coming from the beach resorts.Chichen Itza served as the political and economic centre of the Mayan civilisation and thrived from around 600 to 1200AD. The pyramid of Kukulkan, the Temple of Chac Mool, the Hall of the Thousand Pillars and the Playing Field of the Prisoners can still be seen today and demonstrate the extraordinary commitment to architecture, space and composition. The pyramid itself was the last, and possibly the greatest, of Mayan pyramids.This afternoon we drive about 2.5hrs to Cancun airport in time for the group flight. This is where the tour’s land only portion ends.