Invigorate your senses on a jaunt around the cities and countryside of Vietnam. 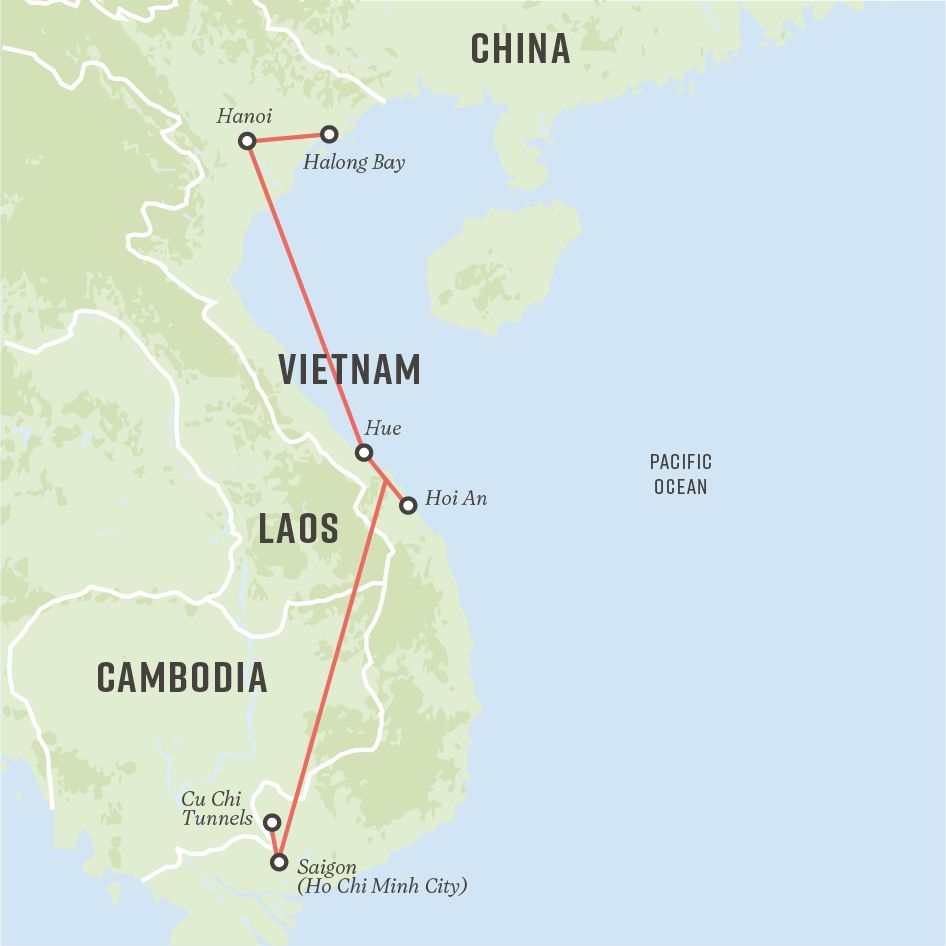 The capital of Vietnam, Hanoi, is ready to welcome you when you arrive. Get acclimatised and familiarise yourself with the city by wandering the tree-lined avenues. There’s a group welcome meeting then you’ll dine at KOTO (Know One, Teach One), a well-established training restaurant for disadvantaged youths. You’ll be served a blend of Vietnamese, South-East Asian and Western foods.

Start the day right with yoga and tai chi

You’ll set an early alarm today, but (blissfully) there’s no commuter slog ahead. Instead, you’re off to Hoan Kiem Lake for a Tai Chi and Laughing Yoga session. Mind and body aligned, you’ll feast on /pho, /a Vietnamese soup, for breakfast before setting off on a walk around Hanoi’s Old Quarter where you’ll sample egg coffee. You’ll try /bun cha/ for lunch, a local speciality dish of noodles, broth and meat served alongside some greens. Later, there’s wine tasting in store, led by local expert Thang. You’ll hear his far-flung traveller tales where he discovered global alcohol-making processes. Then learn how he has introduced teas to enrich the taste of his wines.

Discover the majesty of Halong Bay

After breakfast, you’ll make the four-hour journey by road to Halong Bay. A spellbinding sight, this is where thousands of limestone pillars rise from an emerald-hued sea. You’ll set sail through the karst scenery with lunch served on board and later enjoy sunset cocktails and dinner. You’ll sleep onboard tonight, sharing twin-share cabins with en-suite facilities. Please be aware that the boat trip on Halong Bay can be subject to short notice change if certain adverse weather conditions develop during your trip.

Rise with the sun for tai chi onboard before breakfast. Afterwards, you'll kayak past ethereal grottoes before jumping back on board to cruise back to the mainland and head to the airport for a short flight to Hue (pronounced ‘hway’) on the banks of the Perfume River. As the ancient home of the Nguyen emperors, Hue claims to be the true cultural and historic centre of Vietnam.

There’s a historic immersion lined up today. First, you’ll visit the Imperial City of Hue, a complex of the emperor’s residence, palaces, shrines and state buildings. Although it’s a fraction of what was once here (it was badly bombed in the wars that afflicted Vietnam), it’s a fascinating glimpse into Vietnamese history.   In the afternoon, you’ll visit the Peaceful Bamboo Family, an uplifting community for children with learning disabilities. You’ll have lunch in their biodynamic garden, see their lacquer painting workshop, and have the chance to buy handmade incense and jams.

After breakfast, you’ll take a private bus to Hoi An, once a major trading port that has retained its old-world charm. You’ll have a walking tour of the Old Town, drinking in the history of the 800 centuries-old buildings. Later, there’s an optional lantern making class. (additional cost) if you wish to participate or free time to relax or explore.

After a morning that’s all yours, in the afternoon you’ll take a leisurely bike ride to Tra Que Vegetable Village. Observe how the locals live and grow their produce, then visit a chef’s home to feast on a spread of the regional dishes.

Get swept up in Saigon

Tear yourself away from Hoi An – today you’re bound for Saigon, or Ho Chi Minh City, as it’s now known. You’ll take a short flight to this vibrant, chaotic city. Prepare for an assault on your senses: the relentless racket of scooters and a riot of colourful markets. You’ll take a guided visit to the moving and powerful War Remnants Museum. It’s a horrifying but enlightening insight into the atrocities that afflicted this nation. Tonight, you’ll join the throngs of scooters on a street tour by Vespa. You’ll be guided to the less-explored pockets of the city to try the best of Saigon’s street food.

You’ll visit the Cu Chi tunnels today, an intricate system of underground tunnels that wind for 120 miles. Used by the Viet Cong, the network has living areas, weapon factories, field hospitals and kitchens. On the tour, you’ll hear about the impact the wars had on the local communities. Above ground, your day continues with a cooking class at the Spice Garden restaurant under the expert guidance of a local chef. Having devoured your creations, you’ll return to HCMC. Tonight, there’s an optional dinner and drinks for a fitting farewell to your group before preparing to return home tomorrow.

After a final breakfast in Ho Chi Minh City, a transfer will take you to the airport for your flight home.