Why not extend your trip with a three-night wildlife extension searching for the majestic Bengal tiger in Ranthambore National Park? One of India's leading parks for spotting tigers, Ranthambore is also home to leopard, wild dogs, deer and a huge amount of bird life. Within easy reach of Delhi, the park offers a delightful addition to any India trip. Extend your trip - Add something extra to your Indian adventure by visiting one of the country's best national parks for spotting tigers Jeep safaris - Explore the park with three included wildlife drives in search of the Bengal tiger and other wildlife including sloth bear, wild boar, striped hyena and marsh crocodile Indian Railways - Travel to and from Ranthambore by train, rubbing shoulders with the locals as you watch the scenery go by 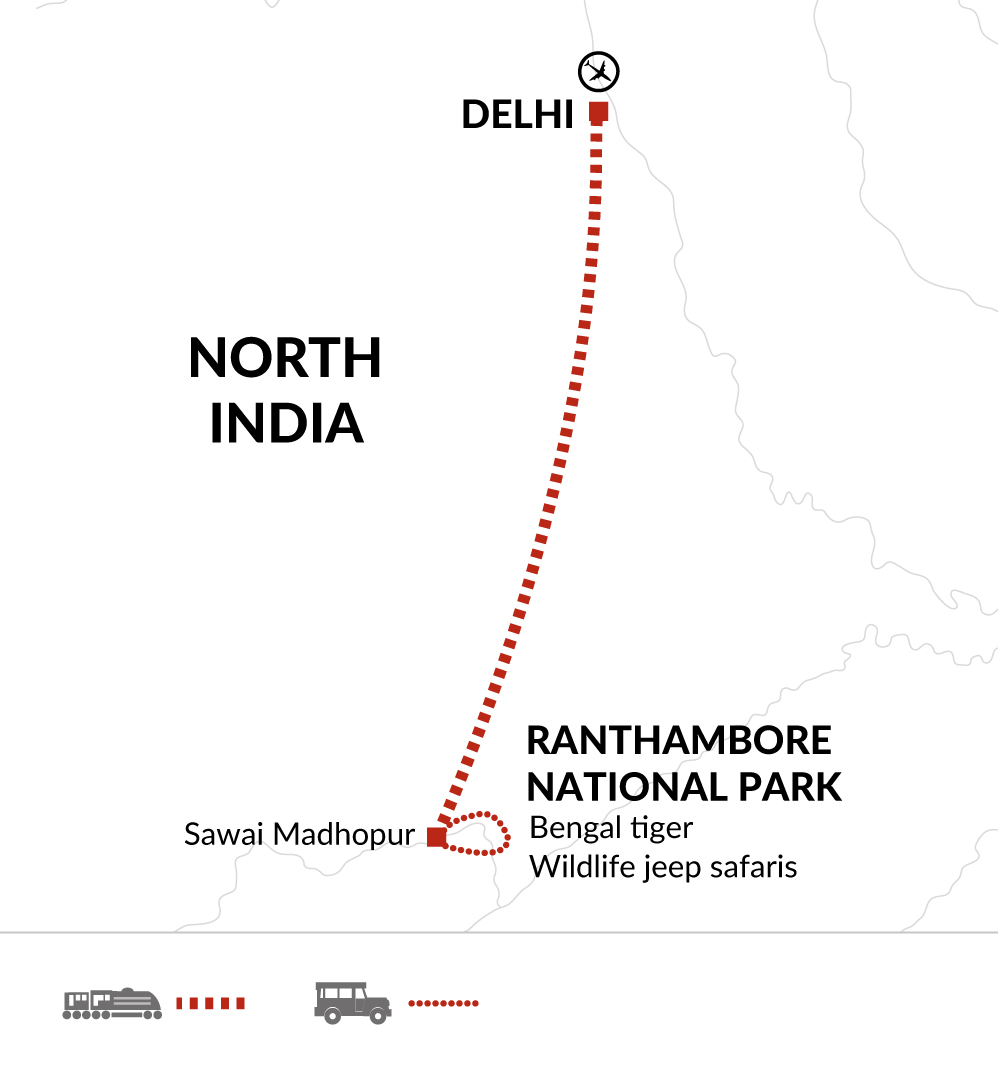 In the late morning you'll be met by our representative and transferred to the railway station for your journey to Sawai Madhopur,the closest train station to the national park . Travelling on an Indian train is a great experience and provides an opportunity to sample a real slice of India as you join local people on board. Founded in the mid-nineteenth century, the railway system in India is a lifeline for the country's vast population with up to 20 million people travelling by train every day. You will travel in comfortable second-class air-conditioned carriage and the journey takes approximately five hours. On arrival in Sawai Madhopur, you will be met for a short drive to your hotel. Set in large gardens that border the park, the hotel is only 15 minutes' drive from the entrance. There is a swimming pool and Auyervedic Spa to enjoy while not on safari, and all your meals are included and taken in the 'Indian Spice' restaurant which serves a variety of cuisines including North Indian, Chinese and Continental. Many of the ingredients used are picked fresh from the hotel's own kitchen garden.

Once the hunting reserve of the Maharaja of Jaipur, Ranthambore has a landscape of rivers, lakes and forests that nestle among steep cliffs and rocky outcrops. It was declared a wildlife sanctuary in the 1950's, although it was still used as a hunting reserve until the early 1970's when it became part of the Project Tiger, a large conservation project across the whole of India which has seen the tiger population steadily rise in Ranthambore and other tiger reserves. This morning you will embark on your first safari. An early start provides you with the best chance of spotting tigers as they are more active in the cool climes of the morning, before the heat of the day forces them to take shelter. You may see them roaming among the woodlands and cooling off in the lakes and possibly even on the hunt. Aside from the tigers, Ranthambore is home to sloth bear, langur, striped hyena, marsh crocodile, python and Ganga soft-shelled turtle. It is also a haven for birdlife, and sightings of eagles, wagtails and white-breasted kingfisher are common. After your morning safari, you will return to your hotel for lunch and to spend a few hours relaxing before venturing out again in the afternoon for another opportunity to spot the wildlife. Each safari lasts around three hours and will be in a shared jeep with up to six people. Although the extension is not accompanied by a tour leader, every jeep has an expert park ranger who will help you to identify the animals that you spot. Ranthambore operates a zonal system to ensure that routes do not get overcrowded with a limited number of vehicles allowed in each section of the park.

This morning you will head out in to the park early for one last chance at sighting the tigers and the other wildlife of the park. In the late morning you will take a packed lunch from the hotel and travel back to Delhi on the Golden Temple Mail train, arriving back in the capital in the evening where you will be met and transferred to the hotel for your overnight in Delhi.

The trip ends after breakfast at our hotel in Delhi. There are no activities planned today, so you are free to depart from Delhi at any time. If your flight is departing later in the day luggage storage facilities are available at our hotel. If you would like to receive a complimentary airport transfer today, you need to depart from New Delhi's Indira Gandhi International airport (airport code DEL), which is around 45 minutes from the hotel.