Departs 5 July 2022: Be immersed in the natural and historical wonders of this previously isolated country and its people accompanied by internationally bestselling author, renowned lecturer, and CEO of the Royal Canadian Geographic Society, John Geiger. 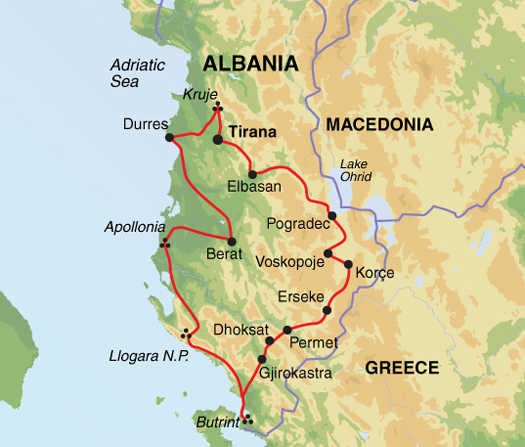 The tour starts today at our hotel in Tirana, Albania’s capital. This afternoon we'll have an orientation tour of the colourful streets of Tirana, which was made the capital of Albania in just 1920. We’ll see the main sites, including the impressive façade of the National History Museum which is adorned with a gigantic mosaic known as ‘The Albanians’. This is one of the finest examples of late Albanian Socialist Realism in the country, depicting the resilience of the people in their fight against invasion and occupation throughout the centuries, and dominates Skanderbeg Square. The exhibits within the museum give great insight into Albania’s intriguing past and recent history up to the present day.We also visit Et'hem Bey Mosque, one of the oldest buildings in the city.  This monument has been under reconstruction for the last two years so we will be able only to view it from the outside in 2020 as well. Closed under communist rule, it reopened as a house of worship in 1991 despite opposition from communist authorities (Ethem bey Miosque is currently under restoration and is closed, so will be visited only if restoration work is finished). We also explore an area known as Blloku on foot, where villas were once occupied by members of The Politburo (a former leading sect of the Party of Labour of Albania) but which is now the lively centre of Tirana’s nightlife where trendy bars, cafés, and fashionable clubs can be found. Hotel Opera or Similar

After breakfast, we begin our drive to Pogradec (approx. 3 hrs. drive), but en route we make a short stop to visit the fortress of Elbasan. A city influenced by various cultures including Turks and more importantly Italians, the fortress here dates back to the 15th century. The fortifications originally incorporated twenty-six towers equidistantly spaced from each other along the length of a nine-metre high wall; today the ruins can be seen along the southern wall which remains more or less intact. Our final destination for today is one of the most charming resorts in Albania, Pogradec, thanks to its position on beautiful Lake Ohrid with clear waters and mountain views. The Albanian side of the lake was included in the UNESCO protected monuments list in 2019. Keep your eyes peeled for Ohrid trout (known as ‘Koran’ in Albania), a species endemic to the lake. We go for a scenic walk at Drilon Park on the far side of the lake, to discover the waterways and ornamental plants and trees that make up this special ecosystem. Elite Hotel or Similar

Transfer to the artists' village of Voskopojë; continue to Korçë

This morning we continue driving for about an hour to reach Voskopoja Village (formerly known as Moskopole) an important and well-known centre of art where many talented Albanian painters chose to practice their profession. The village has suffered over the years, as many of its treasures were stolen during the second half of the 18th century and this continued during the world wars. We take a 40 minute walk to visit one of the oldest churches representing Voskopoja religious art. Another short drive (approx. 30 mins.) takes us to the largest city of south-eastern Albania, Korçë, which sits at the foot of Moravia Mountain, 800m above sea level. This city became an important trading and handicraft centre in the 18th Century and has also been referred to as ‘the city of museums’, being home to the National Museum of Mediaeval Art and Archaeology, the Museum of Education (where the first Albanian School was opened in 1878), and the new museum of ‘Bratko Collections’ displaying antiquities from the Far East. Our visit to Korçë includes the National Museum of Mediaeval Art and Archaeology, Mirahori Mosque (one of the oldest in the Balkans) and the famous church 'The Resurrection'. Korçë has been an important religious centre for Orthodox Christians. It's also worth trying the famous local beer whilst in the city.British Hotel or Similar

Drive via the mountain village of Ersekë to Përmet, famous for its food and
wines

Our drive through the mountains today is truly spectacular as we enjoy sweeping views across the Gramos and Nemercka Mountains. Along the winding route, we enjoy a short stop in Ersekë, which at 1050m is the highest town in Albania. This 17th century town is surrounded by beautiful green pastures of the Gramos Mountains. In the lush forests of Leskovik we stop at a working farm situated in the beautiful woodland. We will see how the different animals are raised here, as well as sample some authentic organic produce. Continuing onwards to beautiful Përmet, we make a quick stop at the old bridge of Benje village, and the hot springs, where we have time to relax and swim. After quite a long day (approx. 5 hrs. drive in total) we arrive in Përmet, situated in the heart of the white mountains on the Vjosë River. This evening you’re sure to be in for a treat as Përmet is famous for its food and wine, including 'gliko' sweets and raki.Hotel Villa Permet or Similar

Drive to the beautiful town of Gjirokastër (approx. 2 hrs. drive), calling in at the traditional village of Dhoksat en route for a home-cooked lunch. In the afternoon we enjoy a guided visit around the famous town of Gjirokastër. Set on a mountain slope, the cobbled streets wind their way between old houses with interesting architectural features including mediaeval towers. The castle is the main feature and stands like a balcony over the town offering wonderful panoramic views of the surrounding landscape. We visit the ethnographic museum which is the house of Albania's former dictator Enver Hoxha.Please note: Lunch with the local family can sometimes be changed to dinner dependent on their availability. Argjiro Hotel or Similar

After an early breakfast, we travel to Butrint National Park, a UNESCO World Heritage Site situated about 18km south of Saranda. Butrint owes its growth and early fame to a sanctuary dedicated to Asclepius, the god of medicine, founded in the 4th century BC. The sanctuary was located on the south slope of the acropolis (hill) and was visited by worshippers to be healed. The Sanctuary was the making of Butrint and the sacred power of Butrint's water, was to be revered as long as the town lasted. The city developed during the Roman times however it fell into decline after an earthquake and was abandoned towards the end of the Middle Ages. From here we drive to Llogora National Park stopping along the coast on the way. Overnight in Llogora.Llogora Tourist Village Hotel or Similar

After breakfast, we take a walk in Llogora National Park, possibly reaching Caeser’s field. Yes, Julius Caeser crossed into today’s Albania in his battles against Pompei which was won in this territory.Next, we stop at the wonderful ruins of Apollonia (approx. 1.5 -2 hrs. drive). Originally occupied by the Illyrian tribes and then the Greek colonists from Corfu and Corinth around 600BC, Apollonia flourished in the Roman period and was home to a renowned school of philosophy (Octavian studied here) but began to decline in the 3rd century AD when its harbour started silting up as a result of an earthquake. After Apollonia we transfer for just over an hour further inland to the UNESCO town of Berat where we spend the night.  Portik Hotel or Similar

Today is dedicated to Berat the gem of Albania. This morning we enjoy a guided tour around the old district of Berat, with its pretty white buildings perched on the hill amid pine forests. We walk through the narrow cobbled streets and finally reach Berat Castle on the slopes of Mount Tomorr, where we are rewarded with breath-taking views (and begin to understand why it is known to Albanians as 'The City of a Thousand Windows'). Within the castle walls are dwelling houses and the Onufri Museum (Museum of Iconography), which we will visit. The rest of the day is free to explore the town. Portik Hotel or Similar

Drive to amphitheatre and port of Durrës; Continue to Krujë

From Berat we drive to the port of Durrës (approx. 2 hrs. drive), the second largest city in Albania and famed for housing the largest amphitheatre in the Balkans. The amphitheatre dates back to the 2nd century AD, seats 15,000 people and contains an early Christian crypt with rare wall mosaics. The city was colonised by colonists from Corinth and Korkyra in 627 BC and was named Epidamnus, but later became Dyrrachium. We then drive to the famous mediaeval citadel of Krujë (approx. 45 mins. drive), where Albania's national hero, Skanderbeg, led the resistance against the Ottomans. He kept them from crossing into Western Europe for 25 years, earning the title "Champion of Christ". In the evening we take a walk to Kruja Hospitality a characteristic house in the castle where you will sample raki and local cheeses.Hotel Panorama or Similar

Tour of Krujë; visit the ethnographic museum and wander through the bazaar

After breakfast we’ll have a tour of Krujë. We will visit the Skanderbeg Museum, a rich ethnographic museum inside the castle, and enjoy inspirational views out to the Adriatic Coast. We have time to wander through the medieval bazaar full of souvenirs and handicrafts. A transfer is included to Tirana Airport (approx. 45 minutes drive), which will be scheduled for mid-afternoon for those who wish to join. It is also possible to extend your stay and request additional accommodation in Krujë after the tour or arrange a private transfer back to Tirana Airport or city.