Russia: Last Journey of the Tsars

A journey through Russia on the Trans-Siberian Railway 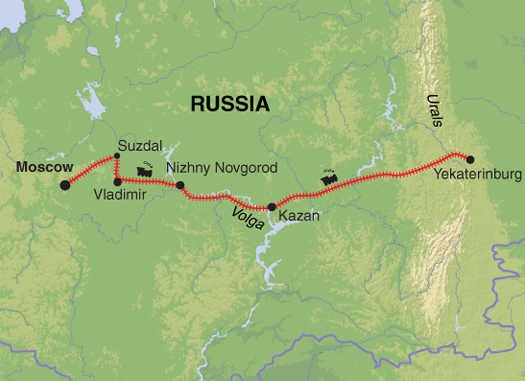 Arrive in the early evening and transfer to our centrally located hotel in Moscow. The journey takes approximately 1 hour from Sheremetyevo Airport yet during peak season this can be longer due to traffic. The closest subway station to our hotel is Arbatskaya on the blue line (the only station where four lines meet). After dinner we recommend an evening walk onto Red Square. *Arbat House Hotel or similar*

This morning we enjoy a walking tour of Moscow, surely one of the most iconic cities in the world. Our route takes us across Red Square, with time to visit Lenin's Mausoleum and the ornate GUM Shopping Centre. We then hop aboard the marvellous, efficient Metro system, for a short tour of some of the most beautiful stations. Many are lined with marble, stained glass and adorned with chandeliers. After lunch, we will explore the Kremlin - a city within a city. It is still the seat of political power in Russia and contains many of its greatest treasures. We visit the magnificent cathedrals of St. Michael the Archangel, the Annunciation and the Assumption, as well as the Tsar Bell and the golden domes of Ivan the Great Bell Tower. In the early evening, we transfer to Kurskaya train station for the train to Vladimir, with an onward transfer to Suzdal. It's an interesting run, firstly through the suburbs of Soviet apartment blocks and then pretty countryside that surrounds the Russian capital. *Hotel Sokol or similar*

Suzdal is sometimes called the 'diamond in the Golden Ring' - referring to the ring of ancient towns and cities of historic and religious importance surrounding Moscow. This small town of wooden cottages and fine churches once served as the capital of Russia, when Moscow was not much more than a cluster of cowsheds. It transformed into a major monastic centre in the times of Ivan the Terrible and also became an important commercial hub. Our morning walking tour will take in all the main sights, including the Kremlin and the Nativity of the Virgin Cathedral. After a lunch stop, we'll visit the Museum of Wooden Architecture, where buildings from all over the region were bought to protect them from redevelopment. The museum really gives us an idea of how people in the past lived. The 'village' includes houses, workshops and even two whole churches. Today we visit a local family and enjoy a traditional meal at their home. *Hotel Sokol or similar*

Today we return to Vladimir, somewhat more industrial than Suzdal, due to its location on the Trans-Siberian line, but no less significant. The town is another former capital of Russia and home to several UNESCO protected architectural masterpieces, including the Golden Gates, St Demetrius’ Cathedral and the Dormition Cathedral. In the late afternoon, we board the eastbound Trans-Siberian Express for Nizhny Novgorod arriving in time for a late dinner. *Gorky Hotel or similar*

Nizhny Novgorod, known as Gorky until 1991, was once a 'closed city' to foreigners to safeguard the security of Soviet military research and production facilities. It was also home to the exiled nuclear physicist Andrei Sakharov an activist for disarmament, peace and human rights. With these dark days behind it, Russias fifth largest city is now home to a beautiful restored cliff-top Kremlin overlooking the confluence of the Volga and Oka rivers. After a morning tour of the main sights, there is free time. After an early dinner back in the city, we once again board the Trans-Siberian Express, this time in 4 berth cabins for the overnight journey to Kazan the capital of the Tatarstan Republic. *Sleeper train*

Kazan is sometimes referred to as 'Istanbul on the Volga', a city where East meets West, and the Orthodox domes and spires compete with the minarets to form the most unique skyline of any Russian city. This is the capital of the Tatarstan Republic, autonomous, oil-rich, but still firmly under Moscow's control. Since 2000 vast sums of money have been spent cleaning up the city, adding bilingual street signs and building a stunning new mosque. Kazan really is like no other city in Russia. Our morning tour includes the Kremlin, The Qul Sharif Mosque, Khan’s Mausoleum and the Temple of All Religions. The afternoon is free to enjoy the city at your leisure. *Maksim Gorky Hotel or similar*

From Europe to Asia, cross the Ural Mountains.

After breakfast, we start our final journey by rail to Yekaterinburg. Boarding the Trans-Siberian Express we head east, leaving Europe behind and moving into the Asian region of the colossal nation that is Russia. Our 14.5hr journey passes through dense forests of pine, small industrial towns, wooden villages and the rolling foothills of the Urals. The journey really gives us a sense of what the rest of the country is like and an idea of just how vast and remote some parts are. Station stops are a real highlight of the day as there is time to leave the train, buy home cooked snacks from locals and meet some of our fellow passengers. This is a day to relax and watch the world go by, before reaching our final destination of Yekaterinburg late in the evening. *Green Park Hotel or similar*

Yekaterinburg is our final destination on this epic journey, a city that has played a huge part in the recent history of Russia. Here, on the 17th July 1918, the Romanov Family met their fate, having been taken here from St Petersburg (then Petrograd) in April of the same year. In a dark cellar of a modest house, they were shot and stabbed by Bolshevik troops, changing the course of European history forever. The house no longer stands, having been pulled down in 1977 on the orders of Boris Yeltsin. Today the new Church on the Blood sits on the same site. As well as a city tour we visit the Museum of The Royal Family. We then have a free afternoon to enjoy the city and you may choose to visit the Museum of Military Glory, or maybe just relax with a coffee in one of the cities many cafes. *Marins Park Hotel or similar*

Our tour ends after breakfast.