Discover the south western corner of Andalucía on two wheels. Cycle from historic Jerez de la Frontera to Conil then along the Costa de la Luz past golden sands. Inland we ride between beautiful, hilltop towns that once marked the frontier between Christian and Muslim Spain. Varied point-to-point cycling - Scenic rides with culture and history Wine tasting - Visit the sherry triangle and learn about the five types of sherry Cádiz - Historic port with plazas and old town imbued with atmosphere and character 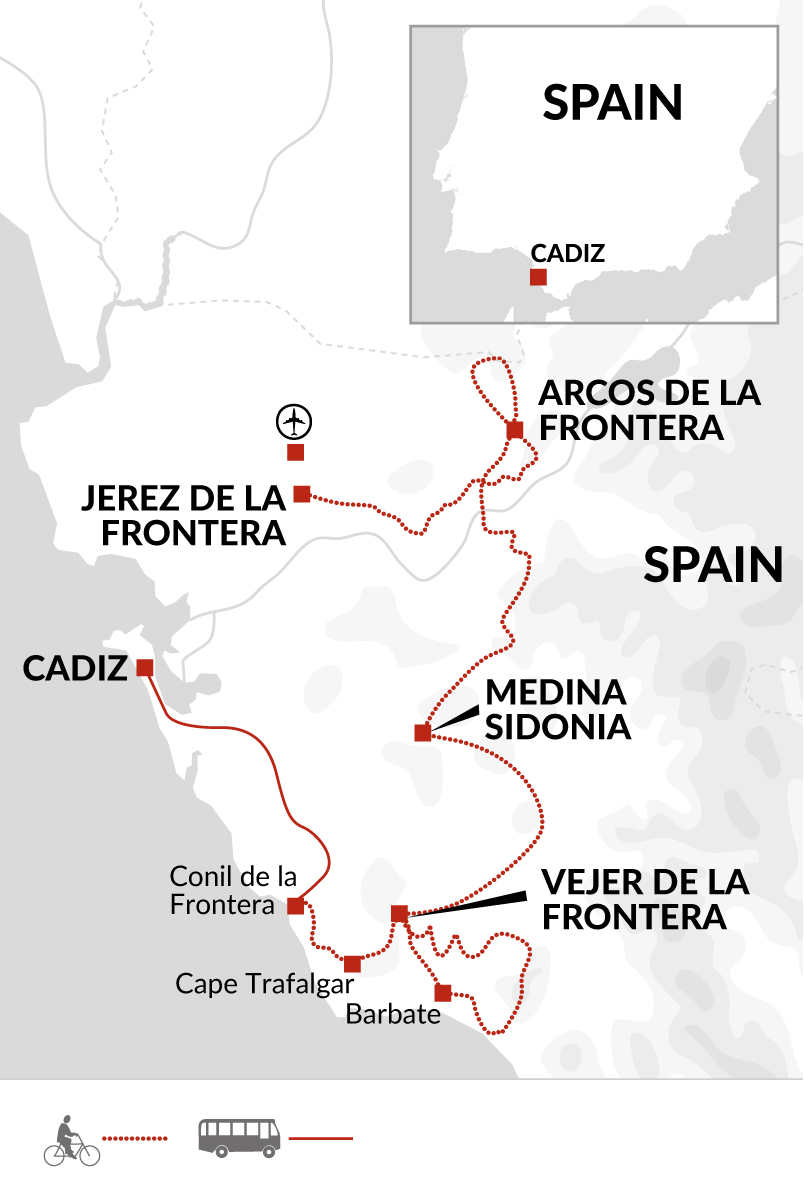 After arriving in Jerez de la Frontera and checking into your hotel, we recommend spending time exploring this historic city. Jerez is the apex of the famous 'sherry triangle' and home to innumerable sherry bodegas and tabancos (bars selling sherry from the barrel poured by a skilled venenciador). Not the sweet cream variety that is known in Britain, the Spanish original fortified wine is dry and best served fresh and chilled - the perfect accompaniment to tapas. Private transfers are available from Jerez Airport (XRY), Seville Airport (SVQ) or Gibraltar Airport (GIB). Please contact our self-guided team for further information. There is also a direct train from Jerez Airport (XRY) to Jerez Railway Station. From the station, your hotel is a short walk away of around five minutes, or you can take a taxi.

Today's ride is a circular loop along quiet interior roads, through vast areas dedicated to agriculture and you can choose between a longer and shorter variation. The rest of your free time can be spent at leisure in Arcos. Arcos was one of the most important frontier towns during the Reconquista, and where the name 'de la frontera' originates. Follow the old Arabic walls, passing the impressive Castillo de los Duques, as you make your way to the Iglesia de San Agustin with its fantastic viewpoint over the river and rich fertile valley of orange, almond and olive trees. You may like to have a look at the unique miniature art museum and lunch at one of the array of restaurants. Our total cycling distance today is approximately 53 kilometres (575 metres total accumulated ascent and 575 metres total accumulated descent). There is a shorter ride available today of 20 kilometres.

Follow a winding road, passing orange and almond orchards through the town of Junta de los Rios where two rivers converge. Passing through San Jose del Valle, which dates back to Roman times, and the impressive El Tempul, you can choose between the direct route along gravel roads past the Moorish Gigonza castle or a the more challenging route along quiet but winding tarmac roads past vast estates. Both routes come together in Paterna de Rivera, famous for its healing waters before arriving in Medina Sidonia. Medina Sidonia has a beautiful grand plaza, medieval Moorish architecture, narrow streets and a stunning viewpoint near the castle ruins on top of the hill. Even the bay of Cadiz can be seen from here on a clear day. Our total cycling distance today is approximately 48 or 60 kilometres (650 metres total accumulated ascent and 500 metres total accumulated descent or 800 metres total accumulated ascent and 650 metres total accumulated descent).

Discover the Roman walls of Vejer, its Visigoth hermitage and castle at the highest part of the old town combining both Moorish and Christian architecture. Pause for lunch in one of the many cafes and restaurants, or walk up to the highest point with panoramic vistas and picnic next to the lovingly restored windmills of San Miguel. For those who want to cycle in the morning, we have described an interesting route first alongside the river Barbate, then across vast rice fields to the beach of Zahara de los Atunes and finally uphill across the nature reserve Parque Natural de la Breña y Marismas del Barbate. Most of the 200 of the total 375 metres ascent is during this last ascent from the coast back to Vejer; the rest is relatively flat, with short ascents. There is an option of shortening the route to 23km but missing the most interesting part! Our total cycling distance today is approximately 23 or 60 kilometres (375 metres total accumulated ascent and descent or 600 metres total accumulated ascent and descent).

Cycle to the coast today, with a choice of routes, both ending in Conil de la Frontera. The longer route heads east, past Barbate, and the pretty surf village of El Palmar. Taking the shorter route affords you more time to wander around the whitewashed houses of Conil de la Frontera, before being driven (30 minutes) to our cosy hotel in the centre of Cádiz. Cádiz is a beautiful Spanish city with 3,000 years of history and its plazas and old town are imbued with atmosphere and character. Founded by the Phoenicians and later the main gateway to the Americas, this historic port sits on a peninsula surrounded by water and is a highlight of this laid-back and sun-kissed corner of Andalucía. We recommend exploring the old quarters of the city and trying some fried fish with a glass of dry sherry. Our total cycling distance today is approximately 24 kilometres (125 metres total accumulated ascent and 250m total accumulated descent) or 34 kilometres (250 metres total accumulated ascent and 370m total accumulated descent).

After breakfast, the organised part of your holiday comes to an end. Private transfers are available from Cadiz to Seville Airport (SVQ) and Gibraltar Airport (GIB). Please contact our self-guided team for further information.