Ride the most famous section of the mighty Danube River, between Passau in Germany and Vienna in Austria, on this easy self-guided cycle holiday. Medieval towns and villages - Krems, Linz and Grein Wachau wines - Sample some of Austria's premier wine Schlogener Schlinge - See the dramatic bend on the Danube. 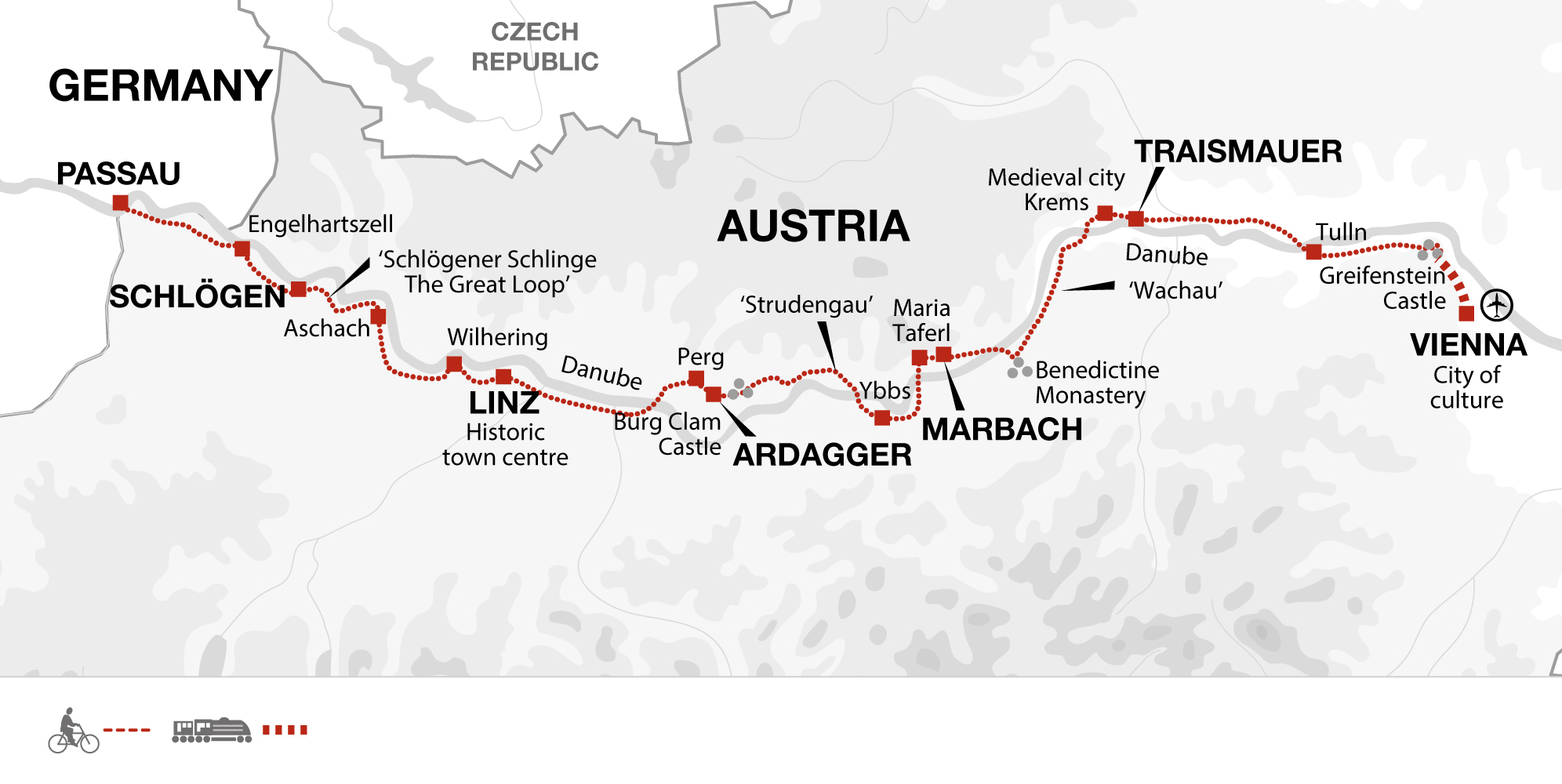 Your holiday starts in the German town of Passau, close to the Austrian border. After checking in to your hotel and picking up your bicycle from the local bike shop, the rest of the day is free to explore this pretty university town. Known as the 'City of Three Rivers', it is here that the Danube is joined by the Ilz and the Inn. We recommend a visit to St. Steven's Cathedral in the Old Town. This Baroque building is home to Europe's largest organ, with an impressive 17000 pipes. If you are lucky, you may time your visit with a lunchtime or evening concert. We also recommend walking up to Veste Oberhaus - the ancient fortress that dominates the city from the hilltop. Now a museum of history and folklore, spectacular panoramic views are afforded from the tower. If you have booked flights returning from Vienna Airport, there are trains available to get to Passau. This does involve a change in central Vienna and will take approximately three hours.

This morning, there is time to explore more of Passau before jumping into the saddle to commence your journey to Schlogen. Cycling alongside the picturesque Danube, it is easy to see how this trail gained its reputation as one of Europe's most famous cycle paths. You cross the river by ferry from Engelhartszell to Uferhausl (ticket paid locally and not included in package) and from here cycle following the river up to Au, on the opposite bank to Schlogen. From here take the ferry across the river (ticket not included). On arrival in Schlogen, a 30-minute walk will lead you to an impressive panoramic viewpoint over a bend in the Danube, where it alters course by almost 180 degrees. Your total cycling distance today is approximately 42 kilometres (120 metres ascent, 140 metres descent).

A 20 kilometre ride along the shady riverbank takes you to the village of Auscach. Here, you may choose to visit the Fischermuseum, with its interesting exhibition on the Danube's historic fishing trade. Further along your route, there is the opportunity to swim in a couple of the picture-perfect lakes that you pass, so make sure you pack your swimming gear for this. Today's journey takes us to Linz. Although this is the second largest industrial town in Austria, it has a pretty city centre. We recommend a visit to the Neuer Dom - the largest cathedral in Austria which was only completed in 1924. Alternatively, you may choose to relax in the Hauptplatz, sampling the famous Linzertorte - the oldest known cake in the world. As you explore the town, look out for the house where Mozart composed his Symphony No. 36, otherwise known as the Linz Symphony. Your total cycling distance today is approximately 51 kilometres (130 metres ascent, 156 metres descent).

Leaving Linz through the park along the Danube, you will continue your journey along the river. 18 kilometres into your route, you may choose to take a 10 kilometre detour to the Abbey of St. Florian (entrance ticket not included) - an impressive example of Baroque architecture and art. After crossing the river by ferry (May to August) from Enns to Mauthausen (ferry ticket not included), another option is to visit the sobering Mauthausen Memorial. Here you will find a well-presented visitor centre which details the atrocities that took place at this concentration camp. As one of the first Nazi 'death camps', conditions here were at the harshest end of the spectrum and survival was not expected. Your base for tonight is Ardagger - a small town near the river. Your total cycling distance today is approximately 55 kilometres (50 metres ascent, 75 metres descent) plus options to do an extra 4 kilometres to Enns, 6 kilometres to Mauthausen or 12 kilometres to St. Florian.

We start today's ride through the Strudengau region and after a short while reach Grein, a quiet village on the river where we recommend a visit to Schloss Greinburg - a castle with stunning panoramic views, which also hosts an interesting navigation museum. From Grein you catch the ferry across to Uberfuhr (ferry ticket paid locally and not included in package). The next village you encounter along today's route is Ybbs where you may wish to visit the quirky bicycle museum where you can admire (and try out) many types of two-wheeled transport. At the end of the ride you take the ferry across the river to reach the town of Marbach where you spend the night. Your total cycling distance today is approximately 35 kilometres (130 metres ascent, 180 metres descent).

Further along the peaceful banks of the Danube the first place on today's ride is Melk, with its UNESCO-listed Baroque abbey - one of the largest in Europe. Benedictine monks have been living here since 1089. We also recommend visiting the abbey garden and the impressive library. Today, you cycle through the Wachau Valley, well-known for its picturesque rolling hills. This is the most famous wine region in Austria and, as you ride through the villages on your route, don't miss the chance stop off and sample some locally-produced vintages. Before your arrival at your night stop in Krems, you may choose to spend some time in glorious Durstein. This little town is a tourist haven, due to its picturesque setting and traditional architecture. The 12th century English king, Richard The Lionheart, was held prisoner here at Kuenringer Castle, the ruins of which still overlook the town. Continue on to Traismauer where you spend the night. Your total cycling distance today is approximately 61 kilometres (130 metres ascent, 180 metres descent).

Your last day of cycling will lead you along the Danube to the historic city of Tulln, founded by the Romans. Your ride continues to Greifenstein, a suburb of Vienna where we may like to visit the castle.This marks the end of your Danube ride and you now and continue the journey to Vienna by train. Your luggage will be delivered to the hotel in Vienna. Vienna is packed full of fantastic sights and architecture. After your week of cycling, we think you definitely deserve a slice of chocolaty Sacher Torte, maybe even at the famous Hotel Sacher. Claiming to be the sole custodian of the original 19th century recipe, the hotel ensures that its formula remains a well-kept secret. Your total cycling distance today is approximately 50 kilometres (99 metres ascent, 114 metres descent).

After breakfast, the organised part of your holiday comes to an end. There are a number of public transport options to get you to Vienna Airport.