A diverse walking holiday exploring UNESCO heritage landmarks in the Sintra Hills and time on coastal trails. Most of the walks are designed to take in the monuments in the morning, when it is still quiet then spend the afternoons walking on dirt trails, woodland tracks and trails with coastal views. Castle of the Moors and Pena Palace - UNESCO heritage landmarks in the Sintra Hills Sintra National Palace - Considered the finest example of Portuguese romanticism Cabo da Roca - The westernmost point of the European continent 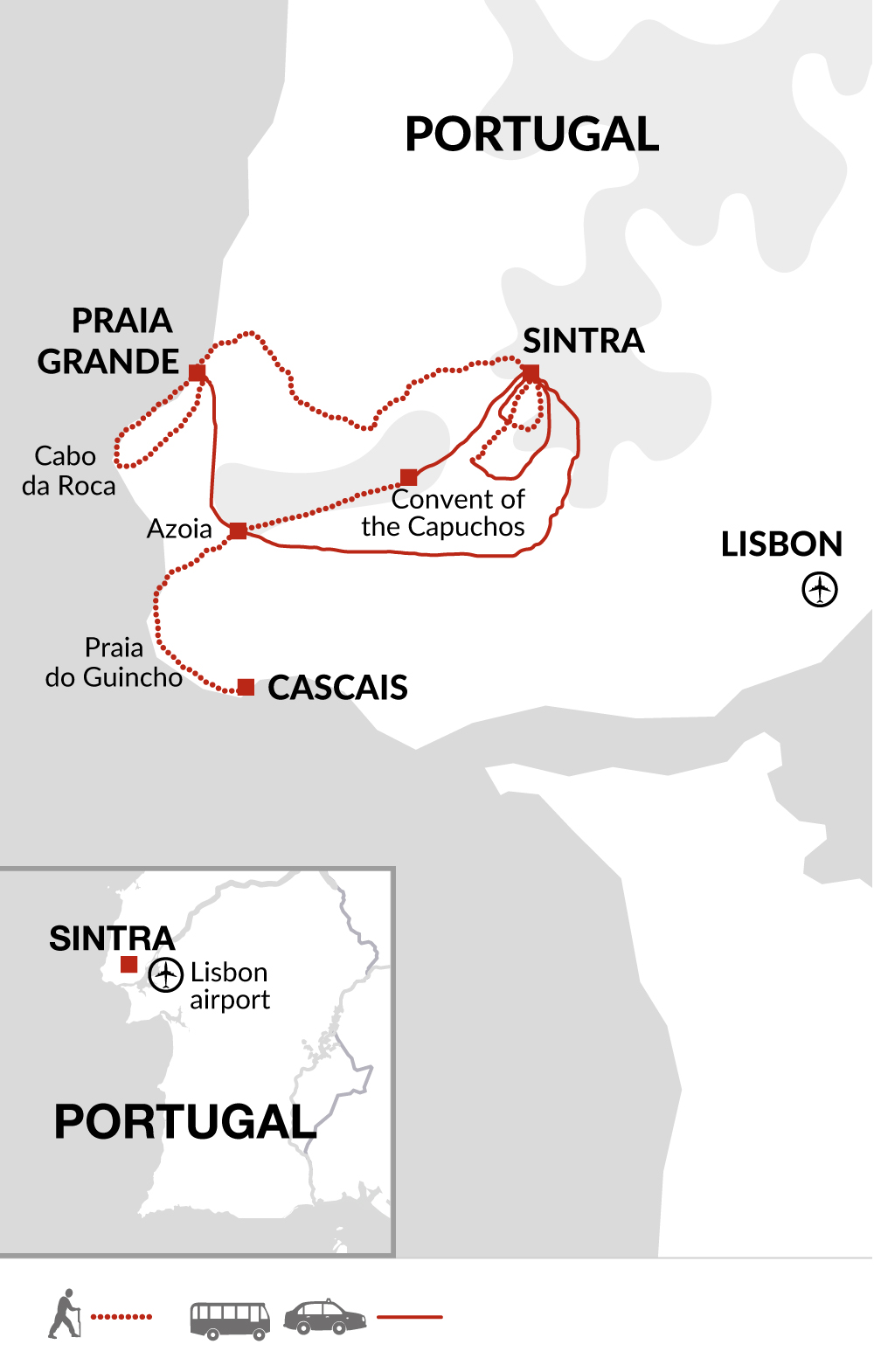 Your accommodation for the first four nights of this trip is in Sintra. The picturesque Portuguese town is set amidst the pine-covered hills of the Serra de Sintra, where kings and noblemen built extravagant summer palaces during the 18th and 19th centuries. We are able to provide private transfers from Lisbon airport (LIS) at an additional cost. Please contact our self-guided trip for further information.

Today you take in the three most prominent monuments of Sintra: Castle of the Moors, Pena Palace and the Sintra National Palace. You start with a steep ascent to the Moorish castle and the colourful dream palace of King Ferdinand, followed by a walk in the vast palace grounds and finally a steep descent via Vila Sasseti to the town centre of Sintra, where the National Palace stands. Today's 9 km walk is expected to take approximately 4 hours and you will ascend and descend 535m.

Today you leave the crowds behind and take an included taxi to the Convent of the Capuchos, a classic 16th-century Franciscan monastery which you can visit before starting your walk. Your walking route leads you through mystical Mediterranean woodlands past hillside menhirs (standing stones) and the shrine dedicated to the Virgin Mary of Peninha. Then you descend to Azoia and take the bus back to Sintra. Today's 11km walk is expected to take approximately 5 hours and you will ascend 400m and descend 500m.

Within a few square kilometres you will find extravagant palaces and mansions built by nobles and wealthy merchants, most of which are still occupied or in use as luxury hotels. Today you can buy a return ticket for bus Line 435 (about 2.50 euros) and begin with a short ride to Quinta da Regaleira; a slightly sinister palace from the early 20th century, built by an eccentric Brazilian coffee farmer and Freemason who constructed spectacular initiation wells seven storeys underground connecting them to the palace via tunnels. Then walk to Seteais Palace; this neoclassical palace was built for a Dutch Consul in the late 18th century. Now a hotel, the gardens are open to visitors. Then you walk along the road (1km) and hike through the forest to reach Montserrat Palace; a Romantic building with Indian and Arabic influences, built by a Portuguese-English Viscount and industrial magnate. When you have finished sightseeing take the bus back to Sintra. Today's walk is expected to be between 2 and 5km.

Today you leave the wealth and romance of Sintra behind as you walk north through fields, vineyards and pine forests toward the rugged coast. In the pretty fishing village of Azenha do Mar, you pick up the GR-11 and follow it south along the coast to Praia Grande and your hotel for the next two nights. Today's 15km walk is expected to take approximately 4.5 hours and you will ascend 150m and descend 150m. It can be shortened by taking the tram to Azenha (runs Thursday to Sunday) and walk just the last few kilometres.

Today you can choose to relax on one of the beautiful nearby beaches or go for a walk. If you decide to walk, from your hotel you pick up the long distance walking path the GR-11 which follows the Atlantic coast, going south along fishermen's trails to reach the village of Ulgueira. There you can decide to walk to Cabo de Roca, the westernmost point of the European continent there-and-back or loop back to Praia Grande via a different route. Along the way you pass a few small bars and the village of Ulgueira. Today's 12km walk is expected to take approximately 4 to 5 hours and you will ascend 575m and descend 575m.

Your last day of walking begins with an included taxi to Azoia, where you pick up the GR-11 and follow it along the coast to the 17th-century fortress of Fortaleza de Guincho, now a luxury hotel with views over Praia do Guincho. You can stop off part-way to take the bus directly to the popular fishing town of Cascais where you spend the night or walk an additional 9.5km all the way to your hotel on a footpath between the road and beach. Today's 17km walk is expected to take approximately 6 hours and you will ascend 350m and descend 435m. This walk can be shortened to 10.5km taking approximately 3 hours.

After breakfast, the organised part of your holiday comes to an end. We are able to provide private transfers to Lisbon airport (LIS) at an additional cost. Please contact our self-guided trip for further information.