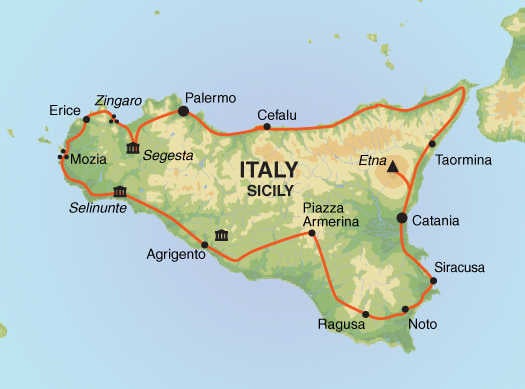 This tour starts in Catania.

The first two nights will be spent in a comfortable central hotel.

After breakfast we enjoy a spectacular guided walk on Mt Etna, Europe's highest active volcano. We hike up past several old lava flows to be rewarded with a dramatic panoramic view of the volcanic landscape (1 to 2 hours walking, approx.5 km). You are strongly advised to take a waterproof/windproof jacket, a warm top and to wear long trousers. In the afternoon we enjoy a delicious wine & cheese tasting in one of the area’s famous wine cellars. Overnight in Catania.

This morning we enjoy a guided tour of this eclectic city. We start from the historic heart of the city, Piazza Duomo, and wander through the main streets, most of which boast several buildings which are a triumph of Baroque style such as Palazzo dei Chierici, Palazzo degli Elefanti and the Duomo (cathedral). We continue via the central fish market, one of the biggest in Italy, and admire the array of bright colours and peculiar smells, accompanied by the unabashed shouts of the fishmongers selling their fresh produce. In the afternoon we drive for approx. 1 hour to the city of Syracuse, once the most powerful city-state in the Greek world and briefly capital of the Byzantine Empire. Here we take a guided tour of Neapolis Archaelological Park accompanied by a local expert guide. The sight is situated in the northwest of Syracuse and is famous for its spectacular ruins, but in particular for the Greek theatre that dates back at least to the 5th century BC. The Roman amphitheatre, built in the 3rd century AD is also very impressive: 140m long - it is one of the largest to be found anywhere; overnight in Syracuse.

The day is free to explore the lovely island of Ortigia, Syracuse's historical heart. We recommend starting from the Piazza del Duomo, a delightful pedestrian square and home to the wonderful Cathedral. The island measures just 1km by 500 metres and can be all easily explored on foot. Restaurants, trattorias and bars abound and it is especially nice to sit out on the western side, warmed by the sun and with a view over the sea. The afternoon is free for further independent exploration. We recommend a visit to the great archaeological museum Paolo Orsi, boasting an extensive collection from the pre-Greek, to the Greek and Hellenistic eras and up to Roman times. Close to the museum you can find the Catacombs of San Giovanni, a maze of tunnels niched with early Christian tombs hidden beneath the flower-filled ruins of a Norman church. Overnight in Syracuse.

Visit the UNESCO Baroque towns of Noto and Ragusa.

In the morning we leave Syracuse and head to the town of Noto (approx. 45 mins), which since 2002 has been part of the UNESCO World Heritage Site 'Late Baroque Towns of the Val di Noto'. The striking architecture is a result of the the major earthquake that struck Sicily in 1693. The old town of Noto was almost completely destroyed, and it was then reconstructed with a special design which was intended to be functional but also harmonious. We explore the small town on foot, wandering around the narrow streets, admiring the golden-coloured stone buildings and the fantastical facades and balconies. After lunch we drive to the town of Ragusa (approx. 1 hour), considered one of the most picturesque towns in Sicily and also one of the UNESCO-listed Baroque towns of south-eastern Sicily. Ragusa became particularly famous in recent years as one of the main filming locations for the Sicilian detective drama Inspector Montalbano. The town is split in two parts, and while the upper section offers some noteworthy architectural delights, it is the smaller Ragusa Ibla below that really draws visitors. The historic centre is compact, making it easy to explore on foot in a few hours.

Explore town of Modica, famous for its chocolate; transfer and overnight in
Piazza Armerina.

We start our day with a visit to Modica, another of the area's UNESCO-listed Baroque towns boasting some fine architecture, picturesque views and historic lanes. The chocolate made in this town is one of the most famous products of Sicily and was discovered by the Aztecs in Mexico and brought to Sicily by the Spanish during the 15th and 16th centuries. Luckily, we will have the chance to sample it during a visit to the town's main chocolate shop. In the afternoon we drive north (approx. 2 hours) to Piazza Armerina, a historic town nestled in the heart of Sicily, and enjoy a pleasant stroll in its charming centre.

Today starts with a guided tour of Piazza Armerina and continues with a visit to the famous UNESCO listed Villa Romana del Casale, considered the best heritage site in Sicily by many visitors. This is one of the best-preserved villas built during the Roman Empire, boasting extensive and almost intact examples of mosaics spread over 3500 square meters. These extraordinarily vivid mosaics, probably produced by North African artisans, portray scenes of daily life, including the famous tableau of girls exercising in their bikinis. We return to Piazza Armerina in the afternoon; those wishing to explore further can choose to visit the impressive archaeological site of Morgantina, approx. 40mins drive from the hotel (optional, payable locally). The fascinating ruins of Morgantina, an ancient Greek city which continued to thrive in Roman times, still preserve major Greek structures, including the sanctuary in the Agora, the public grain store and the theatre.

Visit the Valley of Temples in Agrigento and archaeological sight of
Selinunte.

Today is one of the longest travel days as we make our way south, first stopping in Agrigento (approx. 2 hours transfer) and then continuing to Selinunte (approx. 1hr 20 mins drive) where we stay the night. In Agrigento we will visit the iconic sight of the Valley of the Temples. A guided tour will allow us to discover and learn the history of this splendid archaeological park, which consists of eight temples (and various other remains) built between approx. 510 BC and 430 BC. In the afternoon we explore Selinunte, one of Sicily's great Greek archaeological sites. Situated in the south-western corner of the island, the park incorporates Greek temples, ancient town walls, the ruins of residential and commercial buildings, countryside paths and zones yet to be excavated. Overnight in Selinunte.

Explore the island of Mozia by ferry and drive to the hilltop town of Erice;
overnight in Trapani.

An hour’s drive north and a short boat ride bring us to the island of Mozia, an interesting archaeological site in western Sicily, located between the towns of Trapani and Marsala. The site was once an important colony of Carthage, the Phoenician-founded city in North Africa, with a small museum and extensive ruins to visit. In the afternoon we continue (approx. 1 hour drive) to the picturesque mediaeval hilltop town of Erice, set in a stunning location approximately 800m above sea level. It is not surprising that thanks to its strategic position Erice was occupied by many civilizations; from the Greeks and Carthaginians to the Romans and the Arabs and finally the Normans. We enjoy some free time to explore the town's narrow lanes on foot, and perhaps enjoy some down time and a drink in one of the panoramic terraces at sunset. Overnight in Trapani.

Half day walk in the nature reserve of Zingaro; visit ruins of Segesta and
drive to Palermo.

This morning we take a break from the cultural highlights of the island and head to the coast to explore one of the best examples of idyllic Mediterranean landscape on foot. Stretching along the coast for 7km between the lovely village of Scopello in the east to San Vito Lo Capo in the west, the Zingaro Nature Reserve boasts some stunning walking trails with views out to the cliffs and the azure sea, coves and pristine beaches. We take a leisurely walk for up to 3 hours (including stops) along beautiful coastal trails with the opportunity of a quick swim before returning to the bus. In the afternoon we make our way to Palermo, but not before stopping in the ancient city of Segesta (40 mins drive), founded around 1200 BC by the mysterious Elymians. Here we visit the Greek theatre and the well-preserved 5th-century BC Doric temple, set on top of a hill and surrounded by mountains. Overnight in Palermo.

Morning tour of Monreale and its Duomo; afternoon guided visit to Palermo.

We start our day with a half day excursion to Monreale (30 mins drive each way) to visit its extraordinary cathedral, considered the greatest example of Norman architecture in the world. An extensive area of the interior is covered in gleaming gold mosaics and features an interesting combination of Norman, Byzantine and Islamic art created during Sicily's most glorious era. Later in the afternoon, a local expert guide will take us on a walking tour around Palermo's historic centre revealing some of the most iconic monuments of this city, including Quattro Canti, Pretoria Square and Marina Square. Overnight in Palermo.

Free day in Palermo for further individual sightseeing; drive to the
picturesque fishing village of Cefalu.

The day is free for further individual exploration of Palermo's historic centre. A great way to spend the morning is by heading to one or two of the main street markets (Ballarò, Capo or Vucciria) where the legacy of Palermo’s past as a commercial port continues to manifest itself. Palermo’s Muslim history has made an imprint on the bazaars of the town: bustling, crowded, and full of all kinds of treasures. A morning at the markets is without doubt the best way to connect with the real lifestyle of the locals. Late afternoon we transfer to the lovely fishing village of Cefalu (approx. 1 hr 15 mins). Overnight in Cefalu.

Day at leisure in Cefalu.

Today is free to soak up the charming atmosphere of Cefalu. We recommend to start the day with a visit to the impressive Norman cathedral, home to elaborate Byzantine mosaics , and the restored twelfth-century cloister. Continue with a stroll through the winding mediaeval streets of the historic centre and stop for lunch near the picturesque harbour. In the afternoon you can relax at the sandy beach, take a walk to the hilltop Rocca offering superb views and old fortifications or visit Cefalù's town museum, the Museo Mandralisca. Overnight in Cefalu.

Transfer to Taormina and free time.

This morning we drive to the elegant and fashionable town of Taormina (approx. 2hrs 40mins). On arrival we enjoy a short orientation tour through the town's picture-perfect alleys followed by a visit to the Greek theatre dating back to the 3rd century BC and offering splendid coastal views. The remainder of the day is free for optional activities: if you are looking for a break from the crowds, head to the lovely public gardens. You can also consider a walk (one hour each way) or a bus ride to the neighbouring hamlet of Castelmola. Those looking to relax in the sunshine may decide to visit Isola Bella, a tiny island located in a small bay on the coast just below Taormina. Activities such as cooking classes may be available on request. Overnight in Taormina.