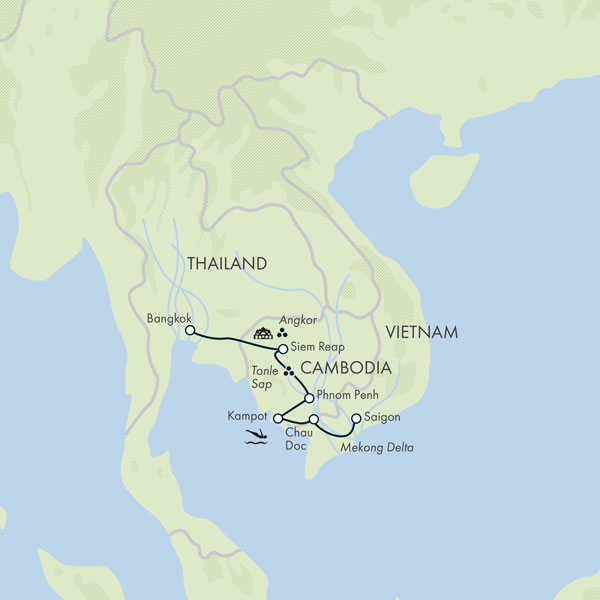 The day is free to recover from the flight. Ho Chi Minh City (HCMC), formerly known as Saigon, is an exciting and absorbing city where bicycles battle with lorries and temples stand defiantly alongside modern developments. Devastated by the Vietnam War, Saigon is now a bustling free market city where anything goes. The Ben Thanh Market and Notre Dame Cathedral are highly recommended.There will be a welcome briefing with your leader this evening followed by an optional group dinner at a local restaurant.Huong Sen Hotel or similar

This morning we leave the city behind us and head west to visit the Cu Chi Tunnels. Used by the Viet Cong during the war, the network covers 3 levels and approximately 240 kms of tunnels. Traditionally these were very narrow but some areas have been widened to allow tourists to explore the system. Claustrophobes may prefer to stay outside in the sunshine!In the afternoon we return to Saigon for a tour which include visits to the Reunification Palace and War Remnants Museum where there is an interesting record of the Vietnam/American War. Please be advised some of the images are of a graphic nature.Huong Sen Hotel or similar

We drive to Cai Be in the Mekong Delta via a Cao Dai temple used by devotees of this strange indigenous religion that fuses all the great religions of the east and west. En route we pass magnificent countryside and stop at some small cottage industries. The Mekong is locally known as the rice bowl of Vietnam and produces much of Vietnam's fruit, sugar cane and coconuts. Cai Be floating market is becoming less crowded and smaller as fruit trading is mostly now done by trucks due to the bridge being built. However, this is still a great opportunity to see a local market and the trade being conducted traditionally on a smaller scale. We take a relaxing sampan cruise in the afternoon and arrive at our accommodation. The evening is tranquil as we have dinner on an island and enjoy some 'Delta' hospitality. We spend the night sleeping at a simple homestay guesthouse built in the style of a local house. Bedding, a mosquito net and a small towel are provided.Mekong Homestay Guesthouse

This morning we take a short walk around the surrounding village to uncover the daily lives of the people. We board our boats once again and cross the main channel to Vinh Long where we re-join our vehicle for the drive further into the Mekong Delta to the small border town of Chau Doc. After checking into the hotel we will enjoy a sunset visit to the top of the holy Sam Mountain with views stretching across into Cambodia.The evening is free to wander around this town, situated on the banks of the Mekong River.Chau Pho Hotel or similar

After driving approximately 1 hour to the Tinh Bien/Phnom Den land border we will bid farewell to Vietnam and cross into Cambodia. Our drive then takes us via the La Plantation Pepper farm, to enjoy an included lunch and an introduction to the famous Kampot Pepper farm. Afterwards, we transfer to Kampot town, which sits on a picturesque river. Upon arrival we check into our centrally located hotel, our base for the next two nights, before boarding a local boat for a sunset cruise on the Kampot River. The river runs through the centre of the town and can flow in both directions as it is closely connected to the sea.Boutique Kampot Hotel or similar

Today we jump on a local boat for the short trip to Koh Tonsai (Rabbit Island). Palm tree fringed with a small beach this is the perfect place to enjoy swimming in the warm water or relax and just soak up the exotic tropical surroundings. Boutique Kampot Hotel or similar

There may be the chance to rise early and do an optional walking tour with your leader to visit the Kampot fish market before returning to the hotel for breakfast. After breakfast, we depart Kampot and transfer to Phnom Penh, where we will spend the next 2 nights.During our time in the Cambodian capital, take the chance to wander among the traditional buildings, or shop at either the impressive Central Market or the sprawling Russian Market, a souvenir hunter's paradise.Ohana Hotel or similar

Full day sightseeing including the Royal Palace and the 'Killing Fields'

We will visit the beautiful Royal Palace and Silver Pagoda inside the Palace complex, so named for the solid silver tiles that make up the floor. Thankfully the complex escaped the worst excess of the Khmer Rouge. Similar in style and scale to the Grand Palace in Bangkok, the Royal Palace has significantly fewer visitors and there is plenty of time to wander amongst the traditional buildings.We will also visit Tuol Sleng museum or S21 (Museum of Genocide), which graphically displays the horrors of the 4 years when Pol Pot systematically ordered the murder of between 2 and 3 million Cambodians. Tuol Sleng was originally a school but was used as a torture and interrogation centre between 1975 and 1979. It is a sobering, but enlightening place to visit. We complete our day with a moving late afternoon visit to the 'killing fields' of Choeung Ek. A football-field-sized area surrounded by farmland, the killing fields contain mass graves for perhaps 20,000 Cambodians, many of whom were tortured before being killed. Phnom Penh is a city in transition and, despite its horrific recent history, it is now starting to find its feet. Some of its former French colonial buildings have been restored and there is a small but lively restaurant and bar scene developing along the riverfront.Ohana Hotel or similar

Today we have a long drive to Siem Reap (approximately 8 hours). En route we stop at the town of Skuon, famous for its local delicacy - fried spiders.We will also stop off at Sambor Prei Kuk, Cambodia's most impressive group of pre-Angkorian monuments and some of the oldest structures in the country. We'll also pause for a traditional Khmer lunch at a community restaurant before continuing our journey to Siem Reap.Angkor Holiday Hotel or similar

A full day spent exploring the complex. We will visit the incredible Angkor Wat, the many temples inside the Royal City of Angkor Thom, including the magnificent Bayon, which comprises of 54 intricately carved towers in one single temple. The Bayon certainly left an impression on an early traveller in 1925 who stated 'we stand before it stunned. It is like nothing else in the land.' We will also see other less-visited outlying temples. Particularly impressive are Banteay Kdei and Ta Prohm, which is still covered in jungle as it was first found. Re-discovered in the 1870s and famously described as being 'grander than anything of Greece or Rome' by the French explorer Henri Mouchot, this world heritage site stands alongside Chichen Itza and Machu Picchu as one of the world's most spectacular archaeological sites. A truly magical experience and a photographer's paradise. One evening we will make our way to watch the sunset over this magnificent scene.Angkor Holiday Hotel or similar

This morning we will continue our exploration of the Angkor complex with a visit to the small but charming Temple of Banteay Srei, which is noted for the intricacy of its carvings, 35km from Siem Reap town. Our route takes us past paddy fields, and through pretty villages. Banteay Srei was built in the 10th century and contains some of the finest examples of Khmer sculpture. Although much smaller than the later temples, here all of the buildings are covered in exquisite carvings. The afternoon is free for you to continue with further independent exploration of the temples or to wander around Siem Reap town or visit a floating fishing village and enjoy a boat trip on the Tonle Sap Lake (optional).Angkor Holiday Hotel or similar

To Thailand; transfer to Bangkok

Today we have an early morning start and bid farewell to Cambodia, and embark on a longer journey from Siem Reap to Bangkok. The journey from Siem Reap to the border can take up to 3 hours. After the border crossing (usually takes up to an hour), we meet our Thai tour leader and have our first taste of Thai food at a local restaurant before continuing onto the capital of Bangkok. Famous for its tuk tuks, khlong boats and incredible street food, Bangkok is an assault on the senses and provides a real contrast to sleepy Cambodia.Rembrandt Bangkok Hotel or similar

Today we board a long tail boat for a tour of the local canals. Please be advised there may be a possibility of larger groups being accommodated in a bigger boat. Bangkok was once known as the Venice of the East because of its intricate canal network. We get a glimpse of daily life as we pass locals selling their wares by the river. We also visit what to this day remains the home of the Thai Royal family at the Royal Palace complex followed by Wat Phra Kaew, home to the Emerald Buddha, one of Thailand's most venerated images. Another highlight is Wat Po, the largest temple in Bangkok, housing a 46m long, 15m high gold-plated reclining Buddha.Please note, when visiting the Royal Palace, clothes covering your shoulders and knees are a requirement for entry.Rembrandt Bangkok Hotel or similar

For land only clients, the tour ends this morning in Bangkok after breakfast.