This week long trip through the cultural heart of Northern India features all of the essentials of the famous three cities which make up the 'Golden Triangle'. Starting and ending in Delhi's chaotic lanes and markets, we travel to Agra to witness the incredible Taj Mahal, stay overnight in the more rural setting of Karauli and see some of Jaipur's magnificent historical splendour. Agra- Witness the Taj Mahal up close and watch as the sun rises over the iconic building Karauli- Visit the imposing royal palace and sleep like a Maharaja in heritage accommodation Jaipur- Explore the sprawling Amber Fort, the incredibly accurate Observatory and the majestic Palace of the Winds 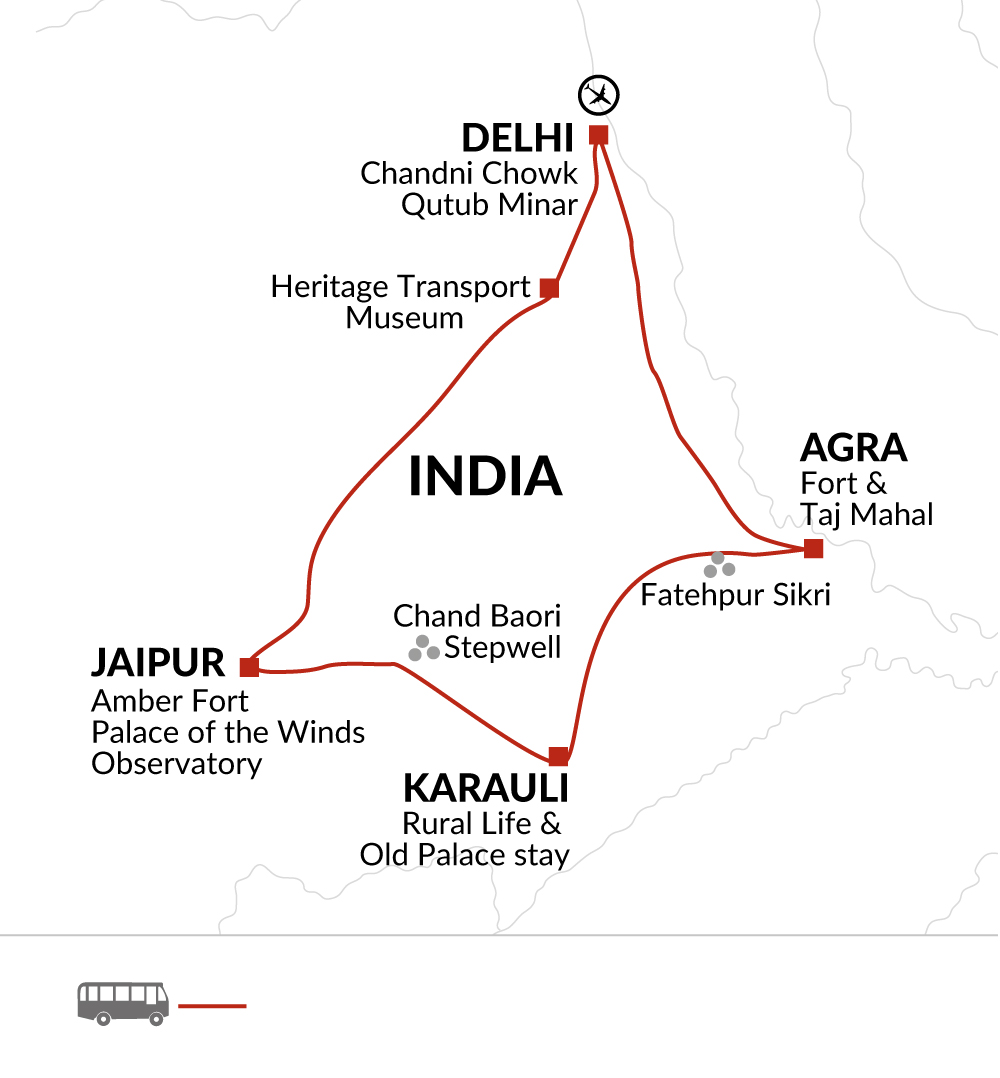 Arrive in New Delhi, India's bustling capital which successfully combines the ancient with the modern. Amidst the tall and modern skyscrapers, there are still the remnants of a bygone time with numerous monuments and temples. For those arriving on time today our Leader plans to meet you in the hotel reception at 2pm for the welcome meeting and to take us on our afternoon city tour we take cycle rickshaws to explore the winding lanes of Chandni Chowk bazaar, a sprawling market where you can buy almost anything you need from household wares to souvenirs. We view the Red Fort from the outside and Jami Masjid Mosque, built by Mughal Emperor Shah Jahan and one of the biggest in India. If you would like to receive a complimentary airport transfer today, you'll need to arrive into New Delhi's Indira Gandhi International airport (airport code DEL), which is 12km, around 45 minutes from our hotel. Please note that if you wish to join the city tour today, you must arrive at the hotel by 2pm. If you are booking your own flights, we recommend giving yourself at least one hour to clear the airport. From the airport to the hotel is around 45 minutes drive, so therefore the latest your flight can arrive is 12.15pm. Should you miss the welcome meeting, your Leader will inform you of any essential information as soon as you catch up.

This morning we will visit the more modern part of the city, New Delhi. The Indian capital has long been a phoenix rising again and again out of its own ruins. New Delhi was the creation of the British Raj of the 1930s. On our tour, we will view the Lok Sabha (Parliament), India Gate, and the Rajpath buildings. We will also explore the Qutub Minar and Humayun's Tomb, set in peaceful gardens away from the often chaotic Delhi traffic. In the afternoon we will drive to Agra, which will take about four hours.

This morning's early start is rewarded with the spectacular sight of the sun rising over the Taj Mahal during our visit. Over 300 years have elapsed since the construction of what is arguably the world's most perfect and poetic building, yet its beauty and symmetry seem unscarred by age. Created by Shah Jahan as a funerary monument to his favourite wife, Mumtaz, it took 22 years to build. The Great Moghul lies beside his beloved under the white marble dome. After our visit, we will return to the hotel for breakfast and some down time. Later in the morning we will visit the imposing Agra Fort and the Itimad-ud-Daulah or 'Baby Taj'. Either side of the river, the grandeur of these two impressive sites either side of the Yamuna river explain why Agra was the first capital of the Mughal Empire. In-between both visits we will have some time to stop for lunch and potentially try some local delicacies such as petha (a dry dessert) or paan (a betel leaf which you chew). To finish our sightseeing in Agra we will head over to the Mehtab Bagh, a park offering a different perspective of the gleaming Taj Mahal with the Yamuna river in the foreground. In the evening you may wish to take part in an optional cookery class and meal during which we will visit a local house and prepare some of the dishes for which Indian cuisine is well renowned.

Early this morning, we continue our journey west and soon reach the deserted city of Fatehpur Sikri. Founded in 1569 and abandoned scarcely 16 years later, it is a perfectly intact example of Akbar's imperial court. Among the many noteworthy buildings is the five-storied Panch Mahal, probably a pleasure pavilion for the ladies of the harem. In the centre of the courtyard is the Pachisi Board, where the emperor played a game like chess, with dancing slave girls as pieces. Perhaps the finest structure of all though is the lotus-shaped carved central pillar of the Diwan-i-Khas (Hall of Private Audience). Leaving Fatehpur Sikri we continue towards Karauli, a smaller town with more of a rural feel. Our drive will take approximately three to four hours and we will arrive at our accommodation in time for lunch. Founded in 1348, Karauli is a holy town which has been strongly fortified by its rulers throughout history and is famous for the pale red sandstone wall which surrounds it. Legend has it that the ruling family were descendants of Lord Krishna, one of the most loved gods of Hindu mythology. Our family-run heritage hotel is an accommodation highlight here, encouraging us to feel like we have stepped back in time to the days of the Raj. After lunch we hope to be able to ride on camel-drawn carts from our hotel to the 600-year-old palace which forms the imposing highlight of this town. Used as a residence by the royal family until 1950, the palace has now been abandoned by them. These days it is mostly occupied by monkeys and geese. It is said that geese have been here since the days when they were used as a warning system against any intruders. After visiting the palace, we will explore other points of interest in the town, such as the Madan Mohanji Temple in time for the arti ceremony.

This morning, after breakfast we will drive towards the city Jaipur stopping en route at the Chand Baori stepwell. Built over a thousand years ago, the stepwell is the equivalent of a modern day water storage unit built to provide water to the area all year round. The stepwell is today not used for these purposes but our stop here will allow us to marvel at the structure and its perfect symmetry with hundreds of slanted steps leading to the water on each side. Leaving the stepwell we drive to Jaipur, a drive of approximately 3 hours. Often known as the 'Pink City', Jaipur was first painted terracotta pink by Maharaja Sawai Ram Singh to celebrate the visit of Prince Albert in 1853. On arrival we will visit the extraordinary Jantar Mantar - a star-gazing observatory built by Jai Singh, the great Maharaja-astronomer. Before checking in to our hotel we will also visit the nearby lavish and well-preserved city palace. Here, we will find a fine collection of textiles, costumes and armoury.

Today we will visit the Palace of the Winds, a five-storied facade built around 1760, which features on many an India postcard. Afterwards, we will drive to the Amber Fort. This impressive hilltop fortress possesses what must be the world's finest Chamber of Mirrors and affords glorious views of the surrounding plains. As we return back to our hotel for a free afternoon in Jaipur, we will get the opportunity to stop and view the Jal Mahal palace. Meaning 'water palace', as its name indicates the sandstone palace sits in the middle of the Man Sagar Lake and is a great photographic opportunity. This afternoon has been left free to explore more of Jaipur in your own time. You may choose to visit one of the famous bazaars which are bursting with delights, from marble statues to antique textiles; traditional print blocks to local musical instruments. In the evening you may be able to take in a famous Bollywood movie at the Raj Mandir cinema, an art deco style cinema where the locals cheer on their favourite movie stars.

After breakfast we start our return journey to the capital from Jaipur, a journey of approximately six to seven hours without stops. A couple of hours outside of Delhi we will stop at India's Heritage transport museum. This building offers a fascinating journey through the country's many transport methods from the pre mechanised era including wooden carriages and bullock carts to a classic selection of over 75 vintage cars and motorbikes. The museum also has several interactive screens with videos on the different transport methods on display. We will also get the chance to view documentary movie 'living in the age of airplanes'. After visiting the museum we will drive to Delhi for our final night.

The trip ends after breakfast at our hotel in Delhi. There are no activities planned today, so you are free to depart from Delhi at any time. If your flight is departing later in the day luggage storage facilities are available at our hotel. If you would like to receive a complimentary airport transfer today, you need to depart from New Delhi's Indira Gandhi International airport (airport code DEL), which is around 45 minutes from the hotel.