The very word 'Transylvania' conjures up images of a mystic land steeped in history, the home of Dracula and eerie legends. This Romanian short break gives you a taster of this magical place, capturing wildlife, mountains and castles over a long weekend. Transylvanian castles - Visit the opulent Peles and Pelisor Castles and the renowned Bran Castle Bear watching - In season see brown bears emerge from the thick forests at a local reserve Bucharest - Explore the capital city including the huge marbled interiors of the Palace of Parliament 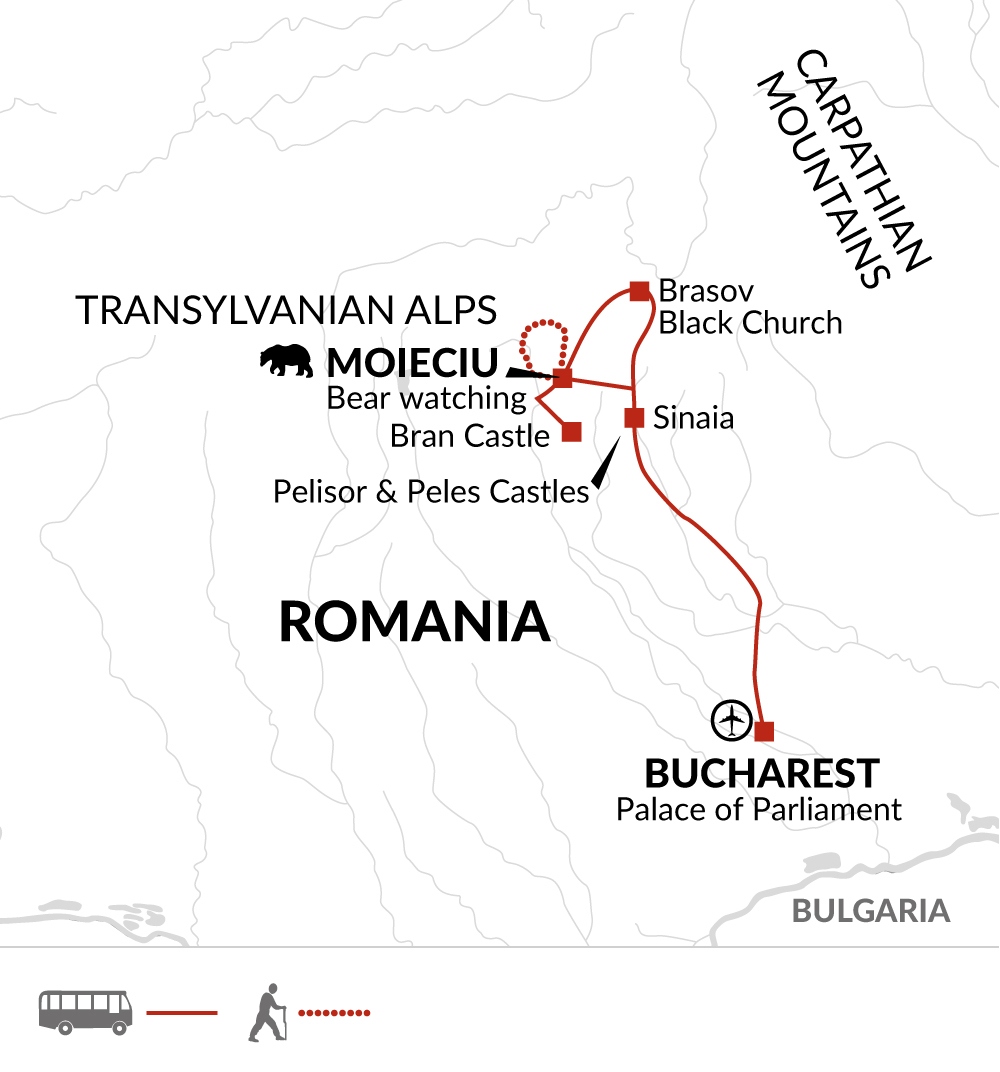 Arrive in Bucharest, Romania's largest city that became its capital in 1832. It has gone through a period of urban renewal and modernisation and it is now a bustling city, at the centre of Romanian culture, art and media. You will be met on arrival at Bucharest's Henri Coanda International Airport (OTP) by a local guide, and driven to your centrally located hotel, around 30 minutes away. There are no planned activities today so you are free to arrive in Bucharest at any time. For those booking their own flights, you will just need to let us know your flight details no later than three weeks prior to departure, in order to be met on arrival. Your guide will be with you throughout the trip, so you have the opportunity today to ask any questions you wish about the itinerary. The luxury of having the same guide throughout is that you can make this itinerary flexible if you want to - if you want more time at a particular site, for example, or conversely if you want to skip a city tour and do some solo exploration that's fine too.

Bucharest is situated on the Danube Plain and set amid a series of lakes and spacious gardens, which showcase a remarkable blend of turn of the century elegance and communist excess. With a guided tour, discover the architecture that earned it the reputation as the 'Paris of Eastern Europe', including the beautiful columned facade of the Romanian Atheneum concert hall and the Royal Palace of Bucharest. Visit also the Palace of Parliament; the magnificent but excessive and controversial palace of ex-President Ceausescu. After the tour, head off to the observatory for bear watching (in season - year round aside from when the bears hibernate over Winter). The Romanian bear population is one of the few strong and healthy populations remaining in Europe and the Carpathian Mountains are home to about 43% of all European bears (approximately 6,000 individuals). This region is therefore of key international importance in the conservation of brown bears and due to increasing human-bear interactions, it's also the focus of much research into the effective management of bears and their habitats. Bears may be active at any time of the day, but generally they forage in the morning and evening and rest in dense woodland cover by day. Try to spot these bears from a hide at dusk when they come out to feed. From here, drive to the Transylvanian village of Moieciu and stay in a local guesthouse for the next three nights. Please note, that the bear watching from the observatory may take place on day four depending on the local forestry department's advice. Also, since the Palace of Parliament in Bucharest is still an active government building that it might not always be open to visitors or possible for to go inside. If this is the case then the itinerary can be amended to visit Sinaia Monastery on day three.

Start this morning with a walk in the Bucegi Mountains surrounding Moieciu. The surrounding forest and woodland are protected as a nature reserve. After the walk, drive to nearby Sinaia, known as the 'Pearl of the Carpathians' because of its stunning scenery. The first port of call is the wonderful Peles Castle. Built for the imported Hohenzollern monarch Carol I, Peles resembles a Bavarian chateau and is richly decorated with stained glass, Persian carpets, Renaissance weapons, ebony and mother of pearl. Then visit the adjacent Pelisor Castle, largely the creation of Queen Marie of Romania, with a fine Art Deco and Art Nouveau interior. Returning to Moieciu this afternoon, there will be the opportunity for you to choose to spend more time bear watching at the observatory. A late dinner is included this evening - an opportunity to enjoy a traditional home cooked meal.

Visit the castle at Bran today. The truth behind Dracula's Castle is even more fascinating than its myths. In the early 20th century it was the home of the remarkable British born Queen Marie of Romania, granddaughter of Queen Victoria. Vlad the Impaler, the infamous 15th century ruler of Wallachia, never actually lived here and Bram Stoker never came near Transylvania! Perched on a crag in a valley between two high mountain ranges, the castle controlled an international trade route, but is now a rural backwater. Exploring the village, the castle and the museum gives you a chance to unravel fact from fiction. Later this morning, drive to the Medieval city of Brasov. Brasov is one of the most historic cities in Transylvania, and you'll spend the rest of the day exploring with your guide. The town is a gem of old buildings, cobbled streets and local atmosphere all clustered within the Medieval fortifications and overlooked by a magnificent 15th century Gothic cathedral. Founded by German settlers to protect the routes that made their way up to the high passes over the Carpathians, Brasov is an architectural delight. There are several churches dating from the 14th through to the 18th century. Later this afternoon you may like to visit one of the museums, the First Romanian School or Saint Nicolas Church in the Scheii area (the old Romanian district of Brasov). In the evening you have an option of returning to the observatory for more bear watching.

Departing Moieciu this morning, drive for around three hours to Bucharest Henri Coanda International Airport (OTP), where the trip ends. We recommend not booking any flights to depart before 12.30pm, due to the length of the drive to the airport. If your flight is departing later in the day then you may choose to return to Bucharest city centre to visit some of the historic buildings or museums. If you wish to be dropped off in the city centre then this can be arranged with your guide. In this case, you will be taken to the hotel in Bucharest where you can store your luggage. To get back to the airport you will need to take a public bus or taxi.