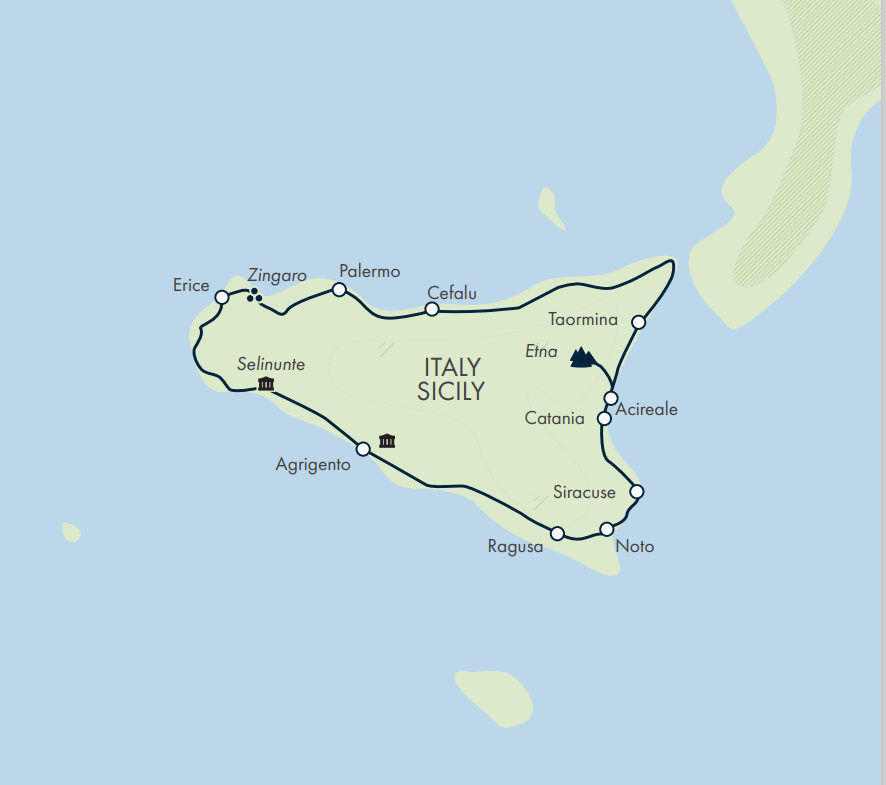 Arrive at Catania airport and transfer to Viagrande, a little town just 30km north of Catania and a 1 hour drive from Taormina. From its lofty position above the sea it offers stunning views of Mount Etna.  The current old town centre was founded in 1408 but Viagrande's first settlement of the village was founded under the Greek domination. The ancient Roman road which led to Messina, gives the name to the village (Viagrande = big road). Important is the territory and the crops that, like the whole of Sicily and the rest of the Mediterranean, are present with vineyards, olive groves, and citrus groves. The best known local products are strawberries from Maletto, honey from Zafferana, pistachios from Bronte and prickly pears from Belpasso. Much more famous even outside the Etna countries are the Etna wines produced at least from the Middle Ages.

After breakfast we enjoy a spectacular guided walk on Mt Etna, Europe's highest active volcano. We hike up past several old lava flows to be rewarded with a dramatic panoramic view of the volcanic landscape and old craters (1 to 2 hours walking, 5 km). You are strongly advised to take a waterproof/windproof jacket, a warm top and to wear long trousers. In the afternoon we enjoy a delicious wine & cheese tasting in one of the famous wine cellars of the area. Transfer back to Viagrande.

Drive to Syracuse to visit its archaeological site; on to the UNESCO Baroque
town of Noto.

This morning we drive to Syracuse (approx. 1h 15 mins drive), the most powerful city-state in the Greek world and briefly capital of the Byzantine Empire. Here we visit the superb Neapolis Archaelological Park with its spectacular Greek theatre and well-preserved Roman amphitheatre, accompanied by a local guide. In the afternoon we drive to our next destination, the UNESCO World Heritage site of Noto (approx. 45 mins). This is an absolute gem: a beautiful town built in the unique Sicilian baroque style using beautiful honey-coloured stone.

Morning visit the hilltop town of Ragusa Ibla; transfer to Agrigento's Valley
of the Temples.

After breakfast we drive to the hilltop town of Ragusa Ibla (approx. 1hr 30 mins), a fascinating maze of winding streets dotted with remarkable baroque churches, and continue on to Agrigento (2hrs 30 mins). Here we enjoy a guided visit of its magnificent Valley of the Temples: the Temple of Juno, the Temple of Concorde, one of the most well-preserved Doric temples in all the Greek world, the Temple of Ercules and the Temple of Castor and Pollux. We then overnight in Agrigento.

Visit ruins of Selinunte, overlooking the Mediterranean; drive to the hilltop
village of Erice.

Our day starts with a transfer to Selinunte (1hr 30 mins) to explore one of the most important archaeological sites in the Mediterranean, set high overlooking the sea. We then move on to the mountaintop village of Erice (1hr 30 mins) , and stop en route for a view of the famous salt flats of Mozia, dotted with characteristic wind mills (time permitting). Once in Erice, we have time for a stroll through its narrow streets and will try the best almond cakes (cassata) on the island. Overnight near San Vito Lo Capo.

This morning we take a break from the cultural highlights of the island and head to the coast to explore one of the best examples of idyllic Mediterranean landscape on foot. Stretching along the coast for 7km between the lovely village of Scopello in the east to San Vito Lo Capo in the west, the Zingaro Nature Reserve boasts some stunning walking trails with views out to the cliffs and the glistening sea, hidden coves and pristine beaches. We take a leisurely walk for up to 3 hours (including stops) along beautiful coastal trails with the opportunity of a quick swim before returning to the bus. In the afternoon we make our way to Palermo (approx. 2hrs) where we can enjoy some time at leisure to discover the vibrant historic centre and lively streets filled with restaurants and bars. We then overnight in Palermo.

After a short transfer to Monreale (approx. 1 hr), we visit its extraordinary cathedral, considered the greatest example of Norman architecture in the world. We then head to Palermo (approx. 1 hr) and our local guide will show us the most important sites of this beautiful city, including Quattro Canti, Pretoria Square, the Cathedral and Marina Square. In the afternoon we have some free time in Palermo to enjoy this eclectic city at our own pace. We overnight in Palermo.

Drive to the fishing village of Cefalu to visit its Norman Cathedral; on to
charming Taormina; free time to explore.

This morning we drive to the fishing village of Cefalu (approx. 1 hr 15 mins), where we visit the impressive cathedral, home to elaborate Byzantine mosaics, and the lovely historic centre with its winding mediaeval streets. Our tour ends in one of the most renowned treasures of Sicily: the charming town of Taormina (approx. 2hrs 40 mins drive). We have time to visit its Greek theatre and enjoy the spectacular views of Mt Etna and the sea. We overnight in Taormina.

Our tour ends in Taormina in the morning of day 9.