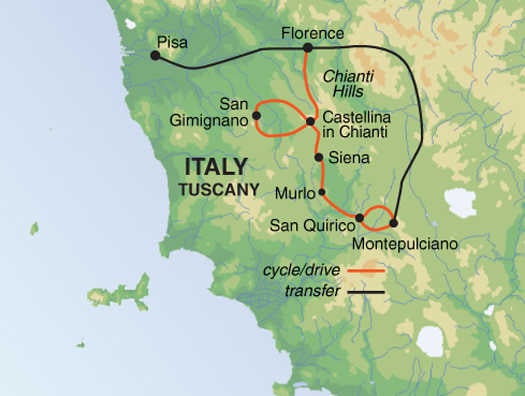 Start in the hilltop town of San Quirico D'Orcia, one of the most beautiful and charming medieval towns of the Orcia Valley.

Circular ride through classic Tuscan countryside via Pienza, the wine town of
Montepulciano and thermal spa village of Bagno Vignoni.

Today we head towards Pienza, a charming town full of history and culture. From here we cycle to the beautifully situated wine centre of Montepulciano, famous for its Vino Nobile. We then head towards the mediaeval village of Monticchiello and on to the well known thermal bath of Bagno Vignoni, before making our way back to the hotel.

Ride through vineyards and the walled town of Murlo to Siena.

A classic day's riding, showing Tuscany at its most picturesque. Following back roads, we head out of San Quirico with a first stop at Montalcino. We then descend on the road to Buonconvento and ride back up to Murlo passing by Bibbiano. From here we ascend the short but steep Rospatoio Pass and take a lovely road section via Ville di Corsano, as we approach the splendid gothic city of Siena.

Free day in Siena to explore or relax.

Siena is one of Italy's best-preserved medieval towns with one of the world's most gracious squares, the Campo. There is plenty to see in Siena and its sights are best explored on foot as the town is compact but hilly. There are many museums and buildings of interest to visit, such as the impressive Duomo. Alternatively you may choose to head out for an unguided ride. On the June 30th departure you will get the chance to be in Siena during the 'Palio Horse Race', one of Italy's most famous annual sporting events and experience the thrilling atmosphere around it. Held in honour of the Virgin Mary, ten of the city’s seventeen contrade, or districts, are represented by a horse and jockey in each race and will compete against each other during this event. It has been held in Siena’s civic hub, Piazza del Campo, since 1644 and local people get involved to a level that it is still common for ‘mixed-marriage’ couples to separate for the days leading up to and including the race if the contrada of the husband and wife both have a horse in contention.

Ride via Gaiole and Radda to Castellina in Chianti.

From Siena we head directly into the heart of Chianti. Our picturesque route takes us via some lovely small villages and hamlets, as well as some spectacular vineyards and castles, such as that of Castello di Brolio. Here there is the option to taste some of the area's finest wines. We then cycle on to Gaiole for lunch and after a gelato stop in Radda, we follow our final section to Castellina in Chianti, where we stay for two nights.

Circular ride through the Chianti hills via towers of San Gimignano and
Monteriggioni.

From Castellina, we ride through rolling countryside before taking an amazingly scenic descent into the lower valley. From Poggibonsi we head towards the distant towers of San Gimignano, nestled between the hills and small hamlets. The Unesco town is one of the most visited and interesting sights in Tuscany; famous for its towers, Vernaccia wine & Safron. We spend a few hours enjoying the atmosphere, walking by the walls and admiring the town's high towers. Our return route involves a long but beautiful climb before reaching Castellina and enjoying a well deserved gelato.

Cycle to Florence via Panzano and Greve in Chianti.

Our final spectacular ride passes through Panzano in Chianti towards the market town of Greve in Chianti. This is described as one of the most scenic roads which links Florence with Siena through the Chianti hills. Here we have time to admire the triangular piazza which hosts the famous Chianti wine festival before heading towards Strada and Impruneta, known for their local terracotta production. In Impruneta we stop for our lunch. We finish by taking a panoramic road towards Florence, cycling all the way to Piazzale Michelangelo for a final group shot. We will arrive in Florence in the early afternoon, giving you time to start exploring this wonderful city of the Renaissance including the Cathedral and Baptistry – the oldest building in the city. Also see the Ponte Vecchio, the superb bridge over the river Arno, lined with goldsmiths and the most famous symbol of the City.

End in Florence. Please speak to our sales team if you would like to book extra nights in this magnificent city.