Delve into rich and colourful Uzbekistan 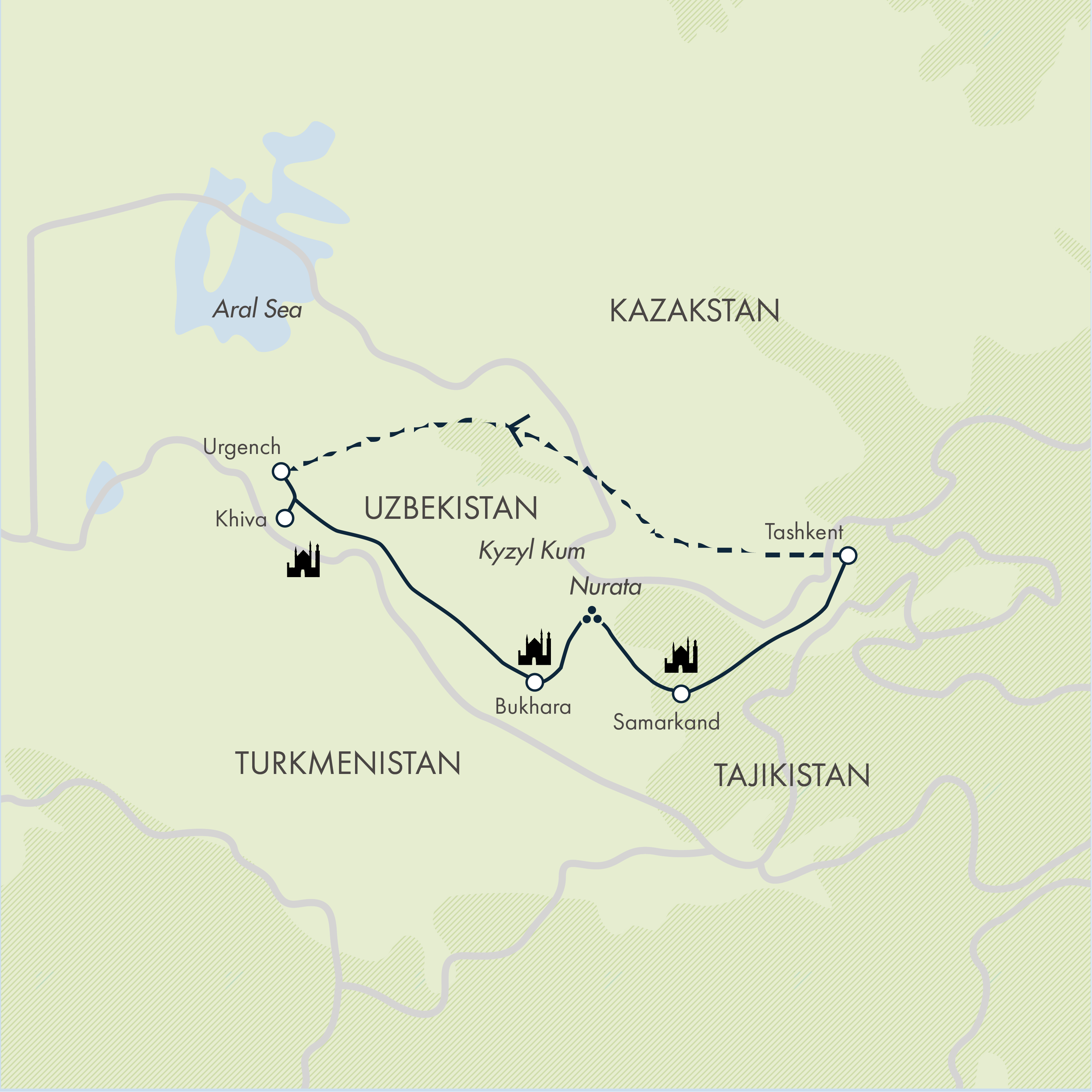 Those on the group flights arrive this morning in Tashkent and transfer to the hotel for a rest. In the afternoon we will start our sightseeing of this Central Asian capital. This will include visiting Independence Square flanked by public buildings and water fountains and also the Old City with its mausoleums and bazaar. Tashkent was largely destroyed by earthquakes in the 60's and was rebuilt in true Soviet style with pleasant leafy boulevards and lots of fountains to keep the heat down in summer. There are some very interesting museums as well as mosques.Gabrielle Hotel or similar, Standard Hotel

In the early morning we fly to Urgench, our base for our visit to Khiva and the Desert sites. On arrival, we transfer to Khiva and visit the living museum of the perfectly restored old city. We will see the khan's old residence, the Kunya-Ark 12th century fortress, the tiled base of the never completed Kalta Minar, (which was originally planned to be taller than any minaret in Bukhara) and the beautiful mausoleum of Pakhlavan Makhmud (Khiva's patron saint) with its tiled courtyard. Many wedding parties and pilgrims come to visit the tomb and drink the water from the well in the courtyard.Please Note: On occasion, it may not be possible to secure seats for the group on the flight to Urgench. In this instance, we will buy flights to Nukus instead, and the activities on days 2 and 3 (land only) will be reversed.Malika Khiva Hotel / Malika Khorezm, or similar, Standard Hotel

After breakfast, we head off to the arid plains of Khorezm. These plains were once densely populated marshland, inhabited by Messagetae Scythians. These horseback archers were nomadic and fought to retain the land, even defeating Cyrus The Great, a Persian emperor in BC 529. We visit the 2000-year-old ruined city fortress of Toprak- Qala, dramatically located with the Sultan Vais Mountains acting as a backdrop. The settlement began in the first century BC under Kushan patronage and was later devastated by Turkish raids that led to the depopulation of the town in the sixth century. There are still three large round towers and an impressive portion of the citadel that still remain, but the parchments and paintings that were found there are now in St Petersburg's Hermitage Museum. We also visit Qizil-Qala, formerly an important oasis with an impressive amount of remaining buildings and finally Ayaz-Qala, an imposing hilltop fortress dating from the Sixth century. We later return to Khiva to spend the night.Malika Khiva Hotel / Malika Khorezm, or similar, Standard Hotel

Drive across Central Asian Plateau and through desert to Bukhara.

A long day's drive on bad roads to Bukhara (approx 10/11 hours); first we cross the fabled Amu-Darya (Oxus) River and then the Kizilkum Desert. If time allows we may have the chance to make a first visit to old Bukhara and have a cup of green tea at the fascinating chai-khana (tea-house) at 'Laby Khauz' (one of the water-filled stone pools).We will break up the journey today with stops en route.Hotel Kavsar / Hotel Sultan, or similar, Standard Hotel

Two days to explore Bukhara, including the 12 Century Char Minar, Bolo Khauz
Mosque and the old Summer Palace of the Emirs.

We have two days sightseeing in Bukhara, the next of our great Central Asian cities. Bukhara boasts over 900 historical monuments, here we will spend time visiting many sites and wandering at leisure amongst the old city streets. Unlike Samarkand, the district of the old town has remained separate from the rest of Bukhara and has undergone lots of restoration and preservation in recent years. In addition to its importance as a trading centre, it is the perfect setting to just sit and watch the world go by much as it has done for hundreds of years. Of particular interest is the Fortress Ark where, in the 19th century, the Emir of Bukhara had the English officers Stoddart and Connolly imprisoned and killed and the mausoleum of Ismail Samani, a beautiful example of early Islamic architecture dating back to the 10th century. We will also visit the Emir's rather kitsch Summer Palace, the old town with its domed bazaars and khauz (stone pools which used to be the city's only water supply), and the attractive 12th century Char Minar. One of the great landmarks of Bukhara is the Kalyan minaret, known as the death tower, where many an unfaithful wife has met a sticky end.Hotel Kavsar / Hotel Sultan, or similar, Standard Hotel

Drive via Gijduvan and Rabad Malik to our yurt camp in the desert.

From Bukhara we transfer to Gijduvan, which is renowned for its ceramics school. The skills have been passed from generation to generation and today Gijduvan is home to the sixth generation of potters from Narzullayevs family. There will be a chance to visit the Museum of Ceramics and perhaps you might like to pick a souvenir at the potter’s shop. We'll be treated to some tea and Uzbek sweets here too!Next, we drive to Rabat-i-Malik (a few kilometres before Navoi city) - mediaeval ruins of the Karakhanid epoch, where we make a short stop. This site was a portal of the caravanserai but sadly much of the rest of the rabat was destroyed in the 1968 earthquake. We'll stop for lunch in Navoi and then drive to our Kazakh yurts. These are traditional round felt tents, which are spacious, colourful and comfortable inside. The Kazakh nomads still use them today. Our camp offers a glimpse into what life was like on the Silk Road in times gone by and with a bit of luck we will watch a wonderful sunset, and then sit around the fire listening to a local musician (akyn).Yurt Camp (multi-share, 3-4 people to a yurt)

Today we walk and there is also the chance to ride camels for a short time towards Aidarkul Lake. The lake stretches through the desert within sight of the Nuratin Mountains and once there we are free to explore the shoreline or swim. Later, we transfer to Nurata, formerly known as Nur and founded in the 3rd Century BC by Alexander the Great. This ancient town was once regarded as the frontier between the cultivated lands and the steppes, and the ruins of Alexander's hilltop citadel stand testament to its ancient history. The city was also an important Muslim place of pilgrimage, reaching its peak in the 10th Century AD as devotees flocked to its many significant graves and memorials. We stop at a 10th-century mosque and holy sites that have attracted pilgrims from all over Central Asia. After a traditional lunch at a teahouse we will drive to Samarkand.Please note that it is not possible for the whole group to ride camels at the same time due to camel numbers.Dilshoda Hotel / Malika Prime Hotel  or similar, Standard Hotel

Samarkand is truly a jewel of the ancient and modern Silk Road. We have a busy full day taking in all the sights. There is the exquisite jade mausoleum of Gur-i-Emir, the resting place of Tamerlane, who is now being rapidly reinstated by the Uzbek government as a national hero. Perhaps the greatest treasure is Registan Square, Tamerlane's outstanding creation, a vast complex of domes and minarets, mosques and medrassas. We will also visit the equally beautiful necropolis of Shah-i-Zinda and the old observatory of Uleg Beg, the greatest Muslim astronomer. Samarkand is still a major centre for textiles, carpets and works of art and is the perfect city to try out bargaining skills and explore the ancient site of the bazaar.Dilshoda Hotel / Malika Prime Hotel  or similar, Standard Hotel

This morning is left free for us to enjoy just a little more time in Samarkand. Perhaps a visit to the local bazaar where you can sample delicious fresh produce, or you might like to return to the many stalls nestled in the Registan Ensemble to find that perfect souvenir. Our adventure in Uzbekistan is almost complete as we leave Samarkand and take a high-speed train back to Tashkent in the late afternoon (please note that the train cannot be 100% guaranteed as occasionally it is booked out by government officials or is unavailable, in which case we will drive instead). Tonight we have a farewell dinner to mark the end of our travels together and reflect on all we have seen.Gabrielle Hotel or similar, Standard Hotel

Those on the group flights will be taken to the airport for their flight. For land only passengers, the trip ends after breakfast.