A comprehensive north to south exploration 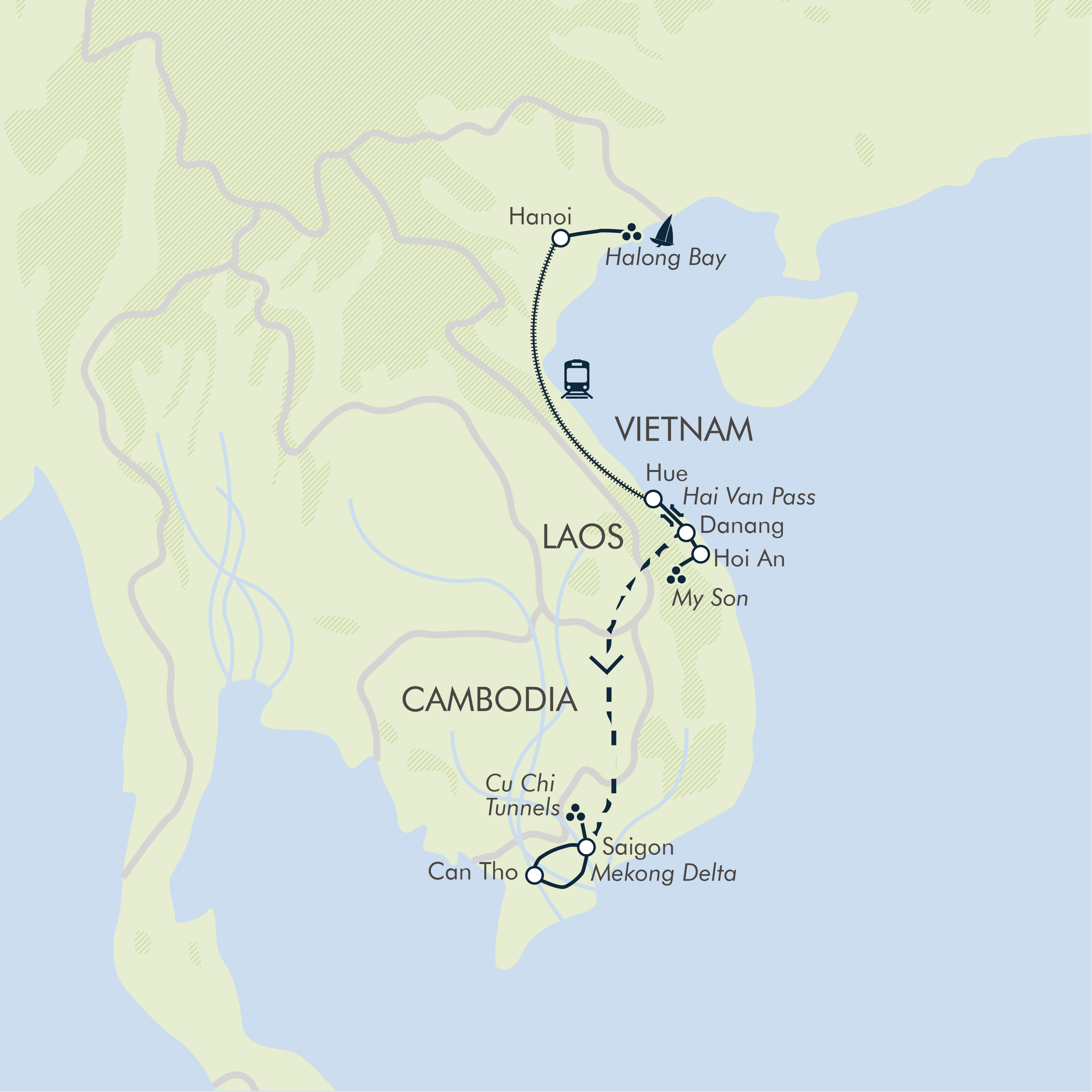 The day is free to recover from the flight or stroll amongst broad tree-lined avenues dating from the French period. There is a faded colonial charm where baguettes and good coffee are sold from doorways of grand buildings of a past era. This evening there will be a welcome briefing followed by an optional group dinner at a local restaurant.May de Ville City Centre Hotel or similar

In Hanoi we take a sightseeing tour of the city that includes a visit to the Temple of Literature; the site of the oldest university in Vietnam with over 2000 graduates, Hoa Lo Prison & the Old Quarter of the city with its '36 Streets' where each street is home to shops selling particular products - e.g. 'silk street', 'gold street', 'paper street' and 'tourist souvenir street'. Another stop is the grounds of the Presidential Palace where Ho Chi Minh refused to live in the grand structure for symbolic reasons. We visit his traditional Vietnamese stilt house here. In the evening there is the option to enjoy a performance of Hanoi's famous water puppets.May de Ville City Centre Hotel or similar

We make an early start for the approximately 4-hour journey to Halong Bay. This is one of the most stunningly beautiful sights in South East Asia with roughly 3,000 limestone peaks rising directly from the clear emerald sea. We cruise amongst this amazing karst scenery and enjoy a seafood lunch on board. We overnight on board in twin share cabins with en suite facilities.Overnight Boat

We continue to cruise around Halong Bay this morning before returning to port. We then drive back to Hanoi, and transfer to the train station and board the Reunification Express for the overnight train ride to Hue, 688km to the south.Overnight Train

Arriving mid-morning in Hue we transfer to our hotel. Hue claims to be the cultural and historical centre of Vietnam, and there is plenty to see. The most outstanding sight is the Imperial Citadel with walls six miles in length. Inside are the palaces and halls of the Mandarins, and the remains of the Forbidden Purple City, where only the emperor, his eunuchs and concubines were allowed. The Forbidden Purple City was almost totally destroyed during the Vietnam War's Tet Offensive, but the foliage-covered ruins are still atmospheric and the gaping holes left by bombs give an idea of the destruction wreaked upon the country during the war.This afternoon we visit the Imperial Citadel and the famous Thien Mu Pagoda. The pagoda was a centre for anti-government protest in the early 1960's and it houses the Austin car that transported a monk, Thich Quang Duc, to Saigon in 1963 where he burned himself in protest against the president. The photograph of his self-immolation was printed in newspapers all around the world. Park View Hotel or similar

This morning after breakfast we visit the mausoleum of Tu Duc, one of the most extravagant mausoleums of the great Nguyen emperors who ruled Vietnam from Hue between 1802 and 1945.Heading back to Hue, the afternoon is then free to further explore and get to know this historical centre or to simply relax by the riverside and absorb the local sights. Park View Hotel or similar

Journey to Hoi An via Da Nang

Leaving Hue, our 130km journey drives through the beautiful peninsula of Lang Co between the crystal waters of a lagoon and the Eastern Sea, and then passes over the spectacular Hai Van pass ('Pass of the Ocean Clouds') where the views are stunning. In Da Nang we stop for lunch before we visit and climb Marble Mountain where we explore the large caves which were used by the Viet Cong as a hospital base during the war. From the mountain peak, there are fantastic views over My Khe beach and the surrounding countryside leading on to Hoi An where we spend the next three nights.Le Pavillon Paradise Hoi An Hotel & Spa or similar

This morning will include a walking tour of Hoi An, the original European trading port in Vietnam dating back to the mid-16th century. It is now a living museum, with attractive wooden merchant's houses and pagoda-style temples with Chinese, Japanese, Vietnamese and European architectural influences. It is also a marvellous place to wander around and enjoy the thriving riverside market and great silk clothes shopping.This afternoon is free, one popular option is to jump on a bike for a ride through the countryside past local markets, schools and villages before continuing on to Cua Dai beach (5 km).Le Pavillon Paradise Hoi An Hotel & Spa or similar

Visit My Son; free afternoon in Hoi An

This morning we will visit My Son, the Cham civilisation's spiritual home, where Cham kings were buried as early as the 4th century. Although wartime bombing has destroyed much of the site, there are a number of interesting stone towers and sanctuaries. Upon returning to Hoi An the rest of the afternoon is free to carry on enjoying this historic town.Le Pavillon Paradise Hoi An Hotel & Spa or similar

We drive to Da Nang and then fly to Ho Chi Minh City (Saigon), an exciting and absorbing city where scooters pack the streets and temples stand defiantly alongside modern developments. Devastated by the Vietnam War, it is now a bustling free market city where anything goes. This afternoon's walking city tour includes a visit to the Ben Thanh Market, Reunification Palace, Notre Dame Cathedral and War Remnants Museum. The Museum has an interesting photographic record of the Vietnam/American War. Please be aware that some images at the museum are very graphic.Huong Sen Hotel or similar

Today we leave the city behind us and head north to visit the infamous Cu Chi tunnels. Used by the Viet Cong during the war, the network covers 3 levels and approximately 240km of tunnels. Traditionally these were very narrow but some areas have been widened to allow tourists to explore the system. Claustrophobes may prefer to stay outside in the sunshine! In the afternoon we return to Saigon and the rest of the day is free for individual exploration.Huong Sen Hotel or similar

In the morning we drive to Vinh Long (approx. 2.5-3 hrs) in the Mekong Delta, known as the 'rice bowl' of Vietnam. This region produces most of Vietnam's fruit, sugar cane and coconuts. We take a boat trip on the mighty Mekong River to Cai Be. Recently, Cai Be floating market is becoming less crowded and smaller as fruit trading is mostly now done by trucks due to the bridge being built. However, this is still a great opportunity to see a local market and the trade being conducted traditionally on a smaller scale.En route we pass many orchards and friendly locals also travelling by boat. We stop to see some small cottage industries such as rice paper and coconut candy, getting a chance to sample the local produce along the way. The evening is tranquil as we have dinner on an Island and enjoy some 'Delta' hospitality. We spend the night sleeping at a simple homestay guesthouse built in the style of a local house. Bedding, a mosquito net and a small towel are provided.Mekong Homestay Guesthouse

This morning we take a walk through the fruit orchards and navigate our way through the small canals in a traditional wooden sampan. Later we rejoin our boat to rendezvous with our vehicle for the journey back to Saigon via a little visited Cao Dai temple used by devotees of this strange indigenous religion, which fuses all the great religions of east and west.Huong Sen Hotel or similar

For land only clients, the tour ends this morning in Saigon after breakfast.