Rugged limestone mountains, deep boulder-strewn gorges, Bronze Age villages and idyllic coastal trails are the locations for scenic and exciting hikes on this Sardinian walking holiday. Explore the natural beauty of the east of this wild and unspoilt island staying at both a welcoming farm-stay in the tranquil interior and contemporary hotel on the stunning Gulf of Orosei coast. Supramonte Mountains - Climb the rugged limestone summits of a wild and windswept mountain range Nuragic ruins - Hike to Tiscali and explore the mysterious legacy of Sardinia's ancient past Gorropu Gorge - Exciting trek through this geological wonder 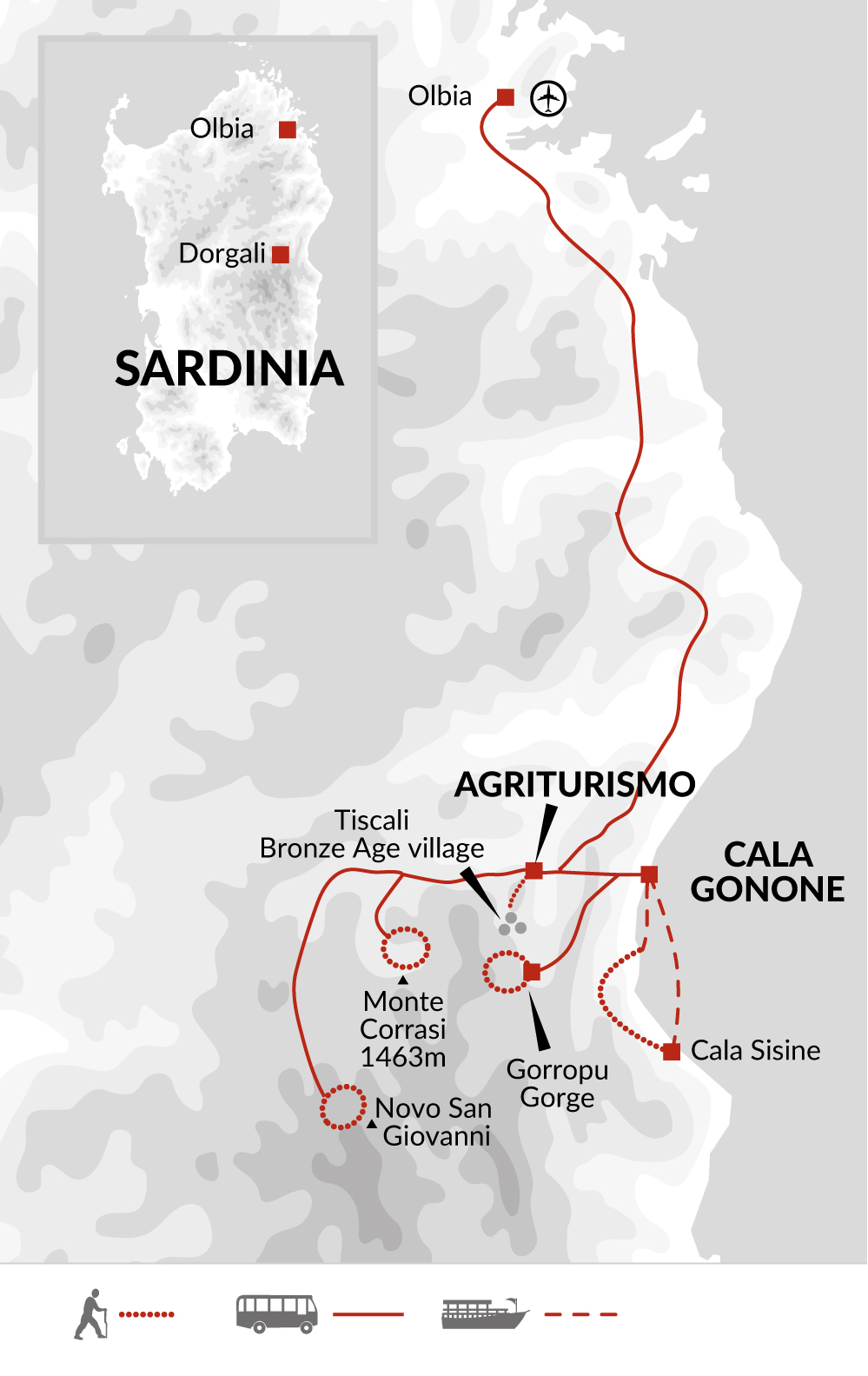 Our trip begins in the Arrivals Hall at Olbia Costa Smeralda Airport (OLB) at 11.00 am. If you would like to join the complimentary airport transfer today, the latest your flight can arrive is 10.30am. We will travel together as a group to our base for the next four nights, the welcoming, family-run Agriturismo Canales. Nanni and Lina's farm-stay occupies a tranquil setting overlooking Lake Cedrino, with views to the mountains beyond. The agriturismo's small restaurant serves up tasty cuisine including typical Sardinian fare such as hearty pasta dishes made with the local Gnocchetti and Seada, a sweet semolina fritter flavoured with pecorino cheese, lemon and honey.

Today's walk will take us to one the most spectacular viewpoints in Sardinia, offering panoramic views over the whole of the Supramonte Mountains and beyond. The Supramonte range is characterised by its rugged karst (limestone) topography from which rivers have carved out deep canyons and ravines. After driving to the start point of our walk near the steep gravel track of Scala 'e Pradu (approximate altitude 750m) we climb up onto the barren limestone plateau that stretches between the peaks of Monte Corrasi and Punta Sos Nidos. We ascend Monte Corrasi first; at 1463 metres it's the highest peak in the Supramonte. The views from here are simply astounding, reaching from Punta La Marmora (Sardinia's highest peak)) and the Gennargentu Mountains to the west to the Oddoene Valley and the Mediterranean Sea to the east. After enjoying the view, we continue at first downhill and then uphill again to the summit of Punta Sos Nidos (1348 m) for a great view down into the Valley of Oliena, hundreds of metres below. The final stretch of our trek takes us back to our starting point. Today's 14 kilometre walk is expected to take around six hours with a total ascent and descent of 800 metres.

This morning we drive to our starting point by the ranger station of the Montes Forest. After the first few kilometres hiking along an easy forest track we reach the base of Mount Fumai and start the steep climb up to its summit at 1250 metres. The view all around is simply fantastic! Descending on a narrow track we return to the valley then head on up to the summit of Monte Novo San Giovanni, a limestone peak that reaches an altitude of 1316 metres. The track is well-maintained, the trek a bit challenging, but our effort is compensated by the breathtaking views of the Supramonte Plateau. We descend back through forest to our vehicle and driving back to our accommodation there's the possibility to stop in the village of Orgosolo to admire the magnificent murals that show the history and culture of this area of Sardinia. Today's 11.5 kilometre walk is expected to take around five-and-a-half hours with a total ascent and descent of 950 metres.

We begin our day with a short drive into the Lanaittu Valley to the Sa Oche Cave where we visit the nuragic temple of the Sacred Spring, an archaeological site discovered only recently. The Nuragic civilization of Sardinia lasted from the 1800 BC (Bronze Age) to the 2nd century BC, with its name deriving from the nuraghe, a fortress-tower construction, the remains of which now dot the Sardinian landscape. The cult of water was an important element of the Nuragic religion and many well-temples and sacred springs were constructed. We set out from Sa Oche, initially along a wide gravel road which later narrows to a rocky footpath, as we climb up to the site of the village of Tiscali, located in a depression at the top of the mountain of the same name. Invisible until you climb down into the depression, it's thought the village was built here for defensive reasons. A number of nuraghe dating back to the first millennium BC can be seen. In the centre of the site a wide window in the rock opens out onto the Lanaittu valley below. We descend to Sa Oche by a different route, taking us through a narrow gorge with lush vegetation where, if we are lucky, we could spot wild boar or a family of wild mouflon sheep. Today's nine-and-a-half kilometre walk is expected to take around four hours with a total ascent and descent of 580 metres.

We say goodbye to the agriturismo this morning and head for the coast to experience a different side of Sardinia. Our next three nights will be spent at a hotel in the seaside village of Cala Gonone on the Gulf of Orosei. This is a laid back place where life gravitates towards the long seafront promenade with a scattering of bars and restaurants and a gently shelving beach. The day is left free. You may choose to take a break from walking to relax on the beach at Cala Gonone or nearby Cala Fuili or catch a boat further along the coast to visit various other remote and beautiful beaches and caves.

We catch a boat south to Cala Sisine this morning and enjoy fabulous coastal views of the limestone cliffs and turquoise waters of the Tyrrhenian Sea. Cala Sisine is an unspoilt sandy beach in a gorgeous cove from where we start our trek along a section of the renowned Selvaggio Blu trail. The Selvaggio Blu (Wild Blue) is a multi-day trek, abseiling and climbing expedition that runs for over 50 kilometres along a stretch of Sardinia's remote limestone east coast. But don't worry - the section from Cala Sisine to Cala Gonone that we hike involves only walking! The rocky trail undulates up and down the cliffs from Sisine to another beautiful beach, Cala Luna at nine kilometres from where there's an option to return to Cala Gonone by boat. For those wishing to continue, it's another five-and-a-half kilometres on to the end of the trek, the beach at Cala Fuili , a 20 minute walk back to our hotel. Today's 14.5 kilometre walk is expected to take approximately five-and-a-half hours with a total ascent of 845m and descent of 910 metres.

Today's walk is in the amazing Gorge of Gorropu, dug out by the forces of the Flumineddu River. After breakfast we drive along one of the island's most panoramic roads, to the trailhead of the path at the Genna Silana Pass at a little over 1000 metres. From here we walk along a steep gravel track leading slowly down to the canyon entrance, passing through the fragrant Mediterranean maquis, coloured by wildflowers and the red fruits of the strawberry trees. On arrival at the gorge, local guides will explain the nature and geology of this amazing canyon after which we set out to walk and explore this wonder of nature on our own. The further we hike into the gorge, the bigger the boulders we have to climb over and the narrower the passages we have to squeeze through, until we reach the point where the base of the gorge is only five metres wide. From here we make our way to the gorge entrance and follow an easy trail along the river to our pick-up point near a bridge over the river. Today's 10.5 kilometre walk is expected to take around five hours with a total ascent of 65 metres and descent of 800 metres.

Departing Cala Gonone this morning we drive to Olbia Costa Smeralda Airport (OLB) where we will arrive about at 8.15 am and this is where the holiday ends. The earliest time you should book a flight to depart today is 10.15 am.