Walking in the Canadian Rockies 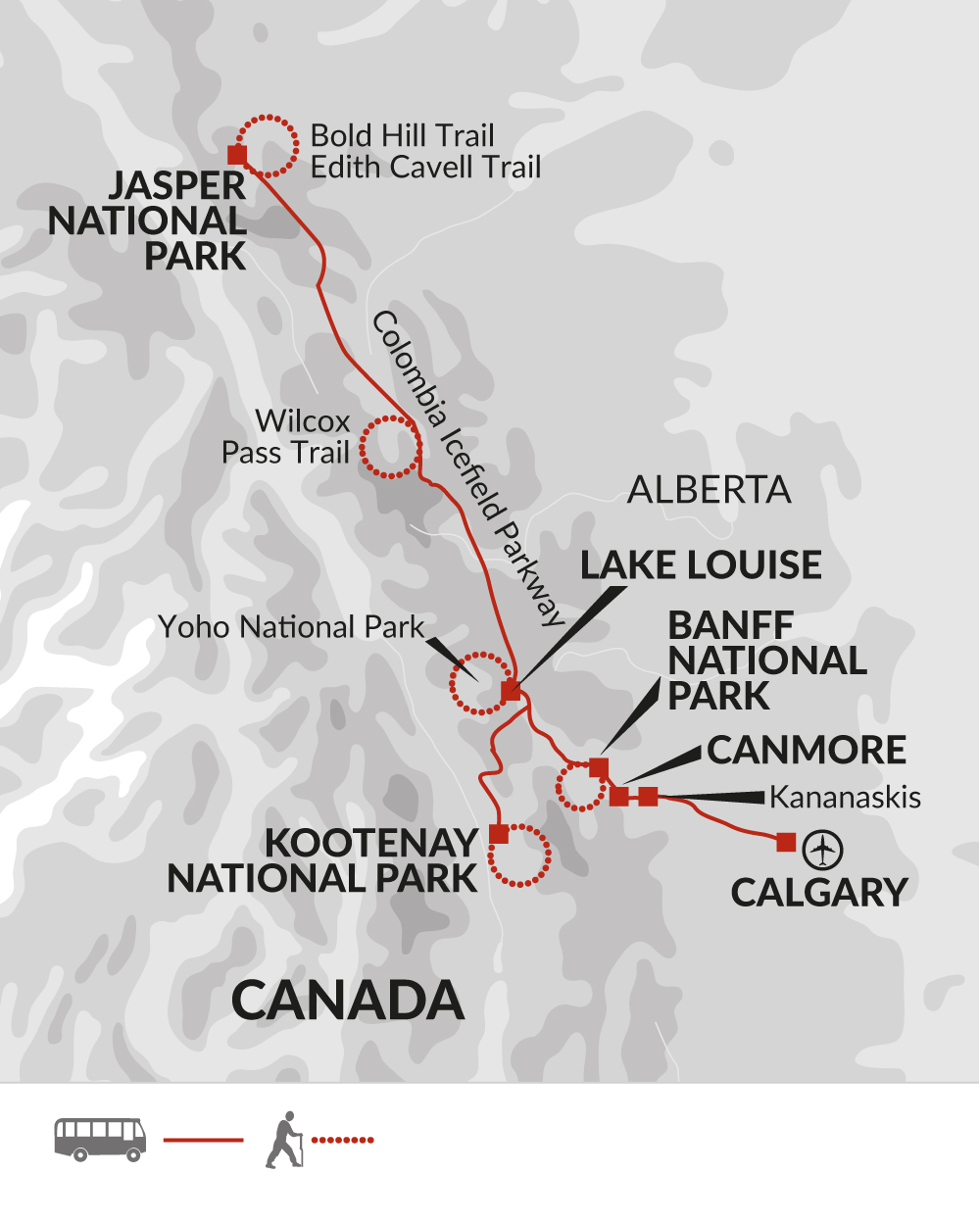 Arrive in Calgary, home to the world renowned Calgary Stampede, this most dynamic of cities is a rich fusion of modern architecture and traditional heritage, where the pioneering history of the Canadian west is woven into everyday life. Due to the number of evening flights into Calgary, your Leader plans to do the welcome meeting on the morning of day two, and will leave a message in reception with details on timings and everything else that you'll need for the day. There are no activities planned today, so you are free to arrive in Calgary at any time. If you would like to receive a complimentary airport transfer today, you'll need to arrive into Calgary International Airport (YYC), which is around 20 minutes' drive. If your flight arrives earlier in the day, perhaps you might like to explore the city and soak up the friendly ambience of this spectacularly located community. Filled with museums, shops and cafes, the centre of the city is a great place to just wander and take in its majestic setting against the backdrop of those ever present mountains.

To the west of Calgary lie the stunning landscapes of Kananaskis Country, Alberta's breathtaking mountain playground. Driving out of the city we head along the Trans-Canada Highway (Highway 1) towards the Peter Lougheed Provincial Park. This landscape is home to bears, elk, moose and mountain lion. We plan to hike out along the Kananaskis Lookout Trail later this morning that takes us through the forest and up to a fire lookout point. This offers some spectacular panoramas across the park to a sea of trees, barren peaks, wide valleys and large lakes. A note on our campsites: all sites used throughout the trip have toilet and shower blocks, and are in beautiful natural locations. You'll help to set up and break camp, as well as loading and unloading the trailer. Meanwhile, your tour leader will cook you up some tasty food in the evenings. Some campsites include launderette and kitchen areas, and others have space for barbecues and fire pits. Today's 12 kilometre walk is expected to take around four hours with 420 metres of ascent.

Today we continue our exploration of the mountain landscapes of the beautiful Kananaskis Valley, making our way through the forests and willow flats of the Burstall Pass Trail. The wide trail climbs steeply, heading towards a patchwork of alpine meadows, passing Burstall Lakes. Crossing Burstall Creek we continue through a wildflower alpine meadow ascending to the viewpoint. On a clear day will be rewared with views out towards Mount Sir Donald to the south, Mount Birdwood to the north and the peaks of Mount Galatea, The Fortress and Mount Chester. Today's 15 kilometre walk is expected to take around five-and-a-half hours with 475 metres of ascent.

We continue hiking in the Banff region today. Set in the heart of the Canadian Rockies and site of the country's oldest national park, Banff is an expansive wilderness of some 6641 square kilometres, encompassing a stunning landscape of spectacular mountain vistas, alpine meadows and crystal lakes. One of the country's most spectacular wilderness areas, it is home to nearly 60 different species of mammals, including grizzlies, black bears, wolverines, marmots and moose. It can also boast some 280 species of birds including golden eagles, ospreys and white-tailed ptarmigan. Today's route that takes us on the Cory and Edith passes. An often overlooked gem in the area, just five minutes from Banff's town centre, this route offers heart pounding ascents (around 900 meters gain), well worn swtich backs, dense forest and stunning alpine views. Today's loop trail take us up to the Cory Pass - considered by many to be the most spectacular hike along the Bow Valley Parkway - around Mt Edith and past Mt Louis; easily noted by the towering grey slabs of limestone that form its east face. The trail climbs steadily into Cory Pass where natural rock pillars guard the way. Eventually the trail will become a wide and gentle path covered with pine needles, we return back to the trailhead on the Edith Pass. Today's 13 kilometre walk is expected to take around six-and-a-half hours with 915 metres of ascent.

Our next destination is Kootenay National Park, one of four protected reserves that form the Canadian Rocky Mountain Parks. On arrival we take a hike along the scenic Stanley Glacier Trail, a moderate trail that follows a series of switchbacks through a huge burn area that is covered in wildflowers and lodgepole pine, before crossing the creek and meandering our way towards the open expanse of the Stanley basin. After the obvious evidence of fire presented to us on the lower part of the trail, this later section offers us the contrasting views of the Stanley Glacier and its meltwater run-offs. After our hike we make our way to our campsite for a two-night stay. Today's nine kilometre walk is expected to take around three hours with 395 metres of ascent.

Continuing our exploration of Kootenay National Park this morning, we begin our hike on the Kindersley Pass Trail, heading up towards the Kindersley-Sinclair summit, where we join the Sinclair Creek Trail. Passing through alpine meadows and forests of Douglas fir, the trail is dappled with wild roses, blue clematis and yellow columbine. As we reach the 2,395 metre Kindersley-Sinclair Pass we will hopefully be rewarded with some spectacular views of Mounts Sinclair and Kindersley, as well as the Devil's Tooth. Later we have the option to pay a visit to the Radium Hot Spring, Canada's largest hot springs pool. Today's 16 kilometre walk is expected to take around six-and-a-half hours with 1,055 metres of ascent.

This morning we drive to Golden where we have an opportunity to take a rafting trip down the Kicking Horse River. From here we continue on to Lake Louise, home to one of the most photographed glacial lakes in Canada. On arrival we will take a walk around this beautiful body of water, perhaps with time to stop for a drink at the historic and imposing Chateau Lake Louise. During your two nights at the Lake Louise Alpine Centre the hostel rooms are all multi-share, with shared bathroom facilities. You will be in the smaller 4 bed dorms, which we will endeavour to keep private and same-sex where possible, although there may be other travellers outside of the group. The hostel is simple, but sociable - facilities include a living room and kitchen where meals will be cooked for the group.

From our base in Lake Louise we drive out today to Yoho National Park on the British Columbia/Alberta border. The park is home to a seemingly endless spectacle of thundering waterfalls, glacial lakes, snow-capped mountain peaks and deep silent forests, presenting us with some of the most dramatic landscapes anywhere in the country. So inspired were the local tribes by the beauty of this country that they christened the area 'Yoho', meaning 'awe and wonder'. On our walk today we will get to see much of this wonderful landscape when we head out along the Iceline Trail, a dramatic, alpine track that traverses a landscape of rock and ice up to the spectacular Takakkaw Falls. Taken from the Cree word for 'magnificent', the falls are fed by the Daly Glacier and, at 309 metres are the second highest falls in Canada. Today's 13 kilometre trek on the Iceland Trail is expected to take around six-and-a-half hours with 695 metres of ascent, it is considered by many to be one of the most spectacular hikes in the Rockies and is graded as moderate to challenging. This is the shortest version of the hike with other options to include the full circuit via Little Yoho (20.8 kilometres) or via Celeste lake (17.5 kilometres). The trip leader will present all the options and choose which would be the best depending on the fitness level of the group as well as the weather conditions.

This morning we'll drive along the celebrated Icefields Parkway, a breathtaking spectacle of lush coniferous forests, immense mountains, turquoise lakes and humbling glaciers. Our journey takes us into the landscapes of Jasper National Park and up to the Columbia Icefield, site of the most accessible glacier in North America. From here we will hike up to Wilcox Pass, named for Walter Wilcox who was in the party that made the first recorded trip into the area in 1896. The glacier scoured trail is blanketed in wild flowers and anemones during the summer season. The trial offers some outstanding views of the Columbia Icefields and Atahbasca Glacier. Today's eight kilometre walk is expected to take around three hours with 355 metres of ascent.

We continue our exploration of Jasper National Park today as we head out to hike the Bald Hills trail. The start of the trailhead is situated at Maligne Lake and, once on the trail, you will be offered some of the finest views of the lake in the region as well as the glaciated peaks to the east. The trail meandres through a protected caribou range and is around 12km round trip, with just under 500m of height gain. Today's 10.5 kilometre walk is expected to take around four-and-a-half hours with 480 metres of ascent.

Our last hike in Jasper National Park today takes us onto the Edith Cavell Trail. Mount Edith Cavell was named in 1916 after an English nurse who was executed by the Germans in World War I for having helped allied soldiers escape from occupied Belgium. The mountain is easily viewed after a short way into our hike we reach Cavell Meadows. Also viewed from this area is the Angel Glacier which flows down the north face of Mt Edith cavell and is named as such due to its appearance of an angel with outswept wings. Named in the 19th century when it was much larger, the glacier is slowly melting and will soon no longer have its distinctive appearance. Today's six kilometre walk is expected to take around three hours with 400 metres of ascent.

This morning we travel back to Banff along the last of the Icefield Parkway. Our final day in the Rockies takes us on a shorter, but no less spectacular, trail, Parker Ridge. The trail takes a steady upwards direction (250m of ascent) to get to the top of the ridge and above the tree line. From the top of the ridge we will get great views of the Saskatchwan Glacier, stretching up the valley that it has carved out over thousands of years. At 288 sq km the Columbia Icefield is the largest icefield south of the arctic circle. Leaving behind this beautiful region we return to Banff to explore the town where there will also be a chance to pay an optional visit to the Hot Spring before continuing to Canmore where we spend our final night. Today's five-and-a-half kilometer hike is expected to take around two hours with 250 metres of ascent.

Departing from our hotel in Canmore after breakfast, we drive to Calgary, where our trip ends. We will arrive at the Ramada Hotel in Calgary at around 10am from here you will be transferred to the airport according to your flight departure time. If you would like to receive a complimentary airport transfer today, you need to depart from Calgary International Airport (YYC). The earliest your flight can depart is 1pm. If your flight is departing later in the day, luggage storage facilities are available at the Ramada Hotel and you will have an opportunity to explore a little of the city on foot before travelling to the airport.