Experience warm hospitality and discover the unspoilt beautiful countryside of Romania on this walking holiday. Travel into the Transylvanian Alps, staying in a local guesthouse in Moeicu and enjoy walks through pine forests and flowered meadows to mountain huts. Piatra Craiului Mountains - One of the most spectacular ridge walks in Europe Bucharest - Explore Romania's capital on foot Southern Carpathians - Walk in the Bucegi mountains to Omu peak (2,505m) 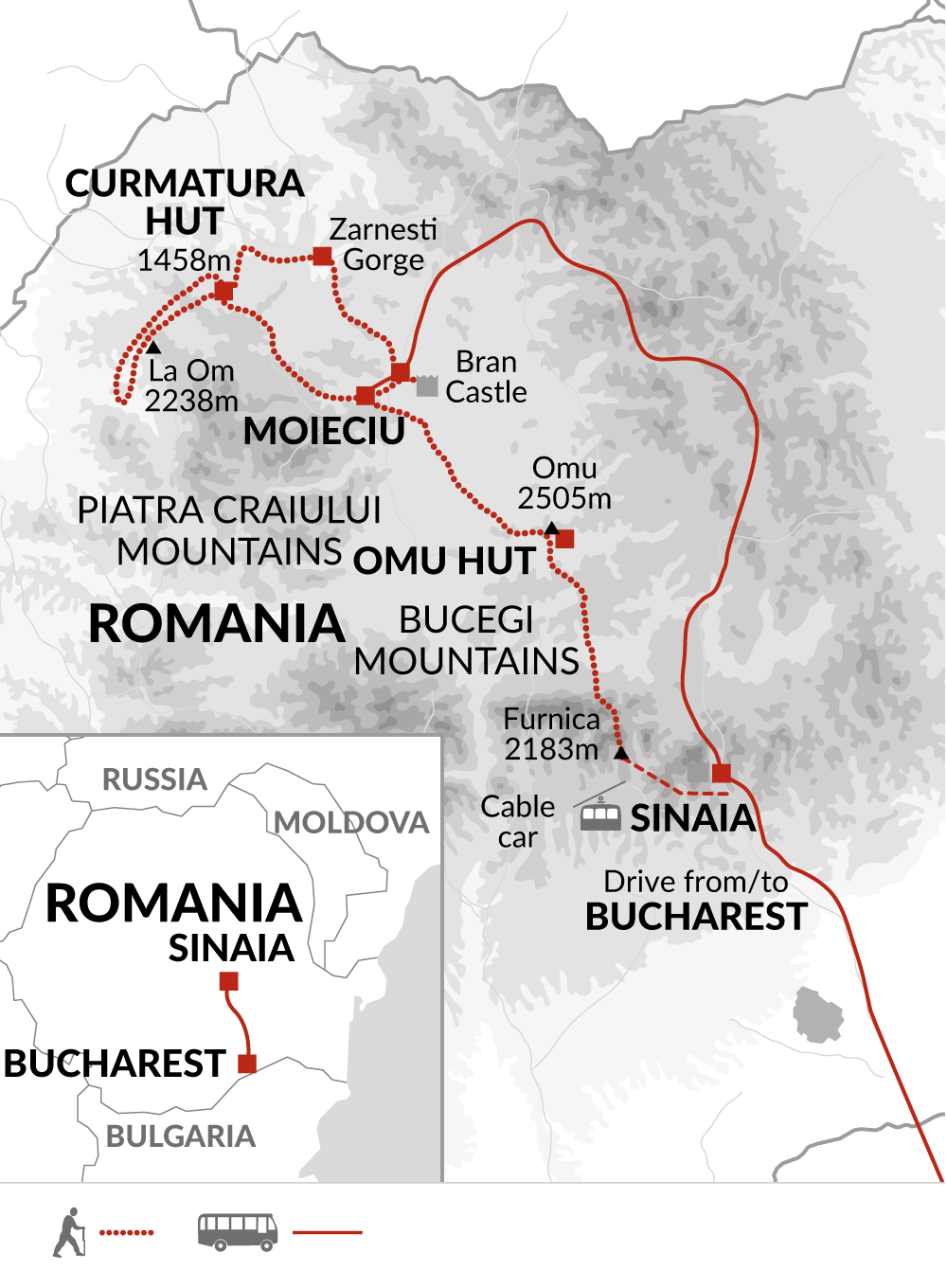 Our trip begins at Bucharest Airport at 8.45pm, the latest your flight can arrive is 8.15pm. You will need to arrive by this time to join the complimentary airport transfer today. We will travel together as a group to our hotel in Sinaia which will take approximately two hours. This is a beautiful mountainous region, at the foothills of the Bucegi Mountains in the Prahova Valley. Sinaia is one of the oldest and most famous mountain resorts, often referred to as 'The Pearl of the Carpathians'.

After breakfast we visit in the Peles Castle (optional) which is considered by many as one of the most beautiful castles in all of Europe. It was the final resting place for several Romanian monarchs including King Carol I, who died here in 1914. Then we take a short cable car ride to the Bucegi Plateau. From here we start our walk through the Bucegi mountains which make up part of the southern Carpathians and walk for approximately 4 hours gaining about 500 meters in elevation to the highest peak, Omu Peak 2505m. Wind and rain have turned some rocks in to spectacular figures such as the Sphinx. We will finish the walk at the Omu Mountain Hut where we spend the night. The dorm rooms in the hut are communal with a stove in the centre, we are allocated two beds per person to allow for extra space. The simple toilets are located just outside of the main building, there is no running water and no washing facilities, although its possible to buy drinks. Although very basic the location at 2,505 metres on top of Bucegi Mountains in the Carpathian Range makes it worth it for one night. Our main luggage is transferred by road and will not be with us so we have to carry what we need for the night. Today's moderate 13 kilometre trek is expected to take around four hours with 775 metres of ascent and 320 metres of descent. If we arrive early enough at Omu Hut there is the option to extend this walk with an additional one and a half hours trek to summit Bucsoiu a nearby peak.

We start our descent, including 50m on a scree path, to the Bran Valley with some stunning views of the Piatra Craiului Mountains. Today we walk from the peak of the Bucegi range to Moeciu and on our way will see natural monuments, various alpine flora and fauna, which could include the edelweiss, mountain wild rose, capercaillie and chamois. This area is also home to the European brown bear but a sighting would be rare. The wild beauty of this area is truly special. Today we walk with some steep sections and rough terrain, good walking boots are essential. The last part of the trail leads us to the guest house through their orchard. Here after a long day we will be welcomed with hot delicious food, locally brewed alcohol and a well deserved hot shower. Today's challenging 20 kilometre trek is expected to take around six hours with 350 metres of ascent and 2000 metres of descent.

Today we start our day with an optional trip to the castle at Bran. The truth behind 'Dracula's Castle' is even more fascinating than its myths! Earlier this century it was the home of the remarkable British born Queen Marie of Romania, grand daughter of Queen Victoria. Vlad the Impaler, the heroic 15th century ruler of Wallachia never lived here and there is no connection with the excellent novel by Bram Stoker - who never came near Transylvania. Perched on a crag in a valley between two high mountain ranges, it controlled an international trade route, but is now a rural back-water. From here we start our walk to the Piatra Craiului mountains. Piatra Craiului (The Royal Rock) is probably Romania's most loved mountain especially by hikers and nature lovers. The shining glow of this huge white limestone ridge can be seen from afar and it is probably the source of its unusual name. The mountain ridge has the biggest bio-diversity of the country. Not surprisingly, it is a national park. The wildlife is very diverse and there are still black chamois on the high cliffs and brown bear, wild boar, deer and stag, foxes, wolf and even lynx in the forests. The Piatra Craiului Mountains are further known for the abundance and diversity of flowers and plants. We walk today for between five and seven hours and end at a mountain hut where we spend the next two nights. The wooden Curmatura hut is located at 1,470 metres in Piatra Craiului national park. There is more space in this hut, with dorms rooms solely for the group and a large outdoor terrace. Washing facilities are limited as there is no running water, but a fresh water spring nearby, the toilet is located outside of the main building. Today's challenging 18 kilometre trek is expected to take around five hours with 1,340 metres of ascent and 660 metres of descent.

Today we take a circular walk from our mountain hut to the Piatra Craiului's beautiful limestone ridge, which is about 25km long, from where we have superb views over the surrounding country. The walk today is challenging in parts with the odd section where you may need to scramble over rocks or through dense forest. Once we are up on the ridge the views of the southern Carpathians are spectacular. After around six hours of walking we will return to our mountain hut for a well deserved hot meal and refreshments. Note: During the walk on the ridge there is a section approximately two metres in width which will require holding on to a chain to cross. Vertigo sufferers may wish to opt out of this walk. There will also be a descent of 300m on a scree path. Besides this, today's walk will not operate if it is raining or if there is a threat of rain. If this is the case an alternative walk in the area will be arranged. Today's moderate seven-and-a-half kilometre trek is expected to take around four hours with 800 metres of ascent and descent.

Today we leave the mountain hut behind and walk to our guesthouse in Moeciu. Today's walk takes us through more beautiful countryside including the Zarnesti Gorge which has been used as a filming location for a number of movies including Cold Mountain. Today's moderate 18 kilometre trek is expected to take around five hours with 470 metres of ascent and 1,100 metres of descent.

This morning we drive to Romania's capital, a remarkable blend of turn of the century elegance and communist excess. Situated on the Danube plain and set amid a series of lakes and spacious gardens, remnants of more gracious days still exist to charm the visitor. We visit many of the older parts of the city to see some of the buildings that have earned it the reputation as the Paris of Eastern Europe. After the city tour we have free time for shopping, relaxing or more sightseeing.

The trip ends after breakfast at our hotel in Bucharest. There are no activities planned today, so you are free to depart from Bucharest at any time. If your flight is departing later in the day luggage storage facilities are available at our hotel. If you would like to receive a complimentary airport transfer today, you need to depart from Bucharest Henri Coand? International Airport (OTP) which is around 20 minutes' drive from the hotel.