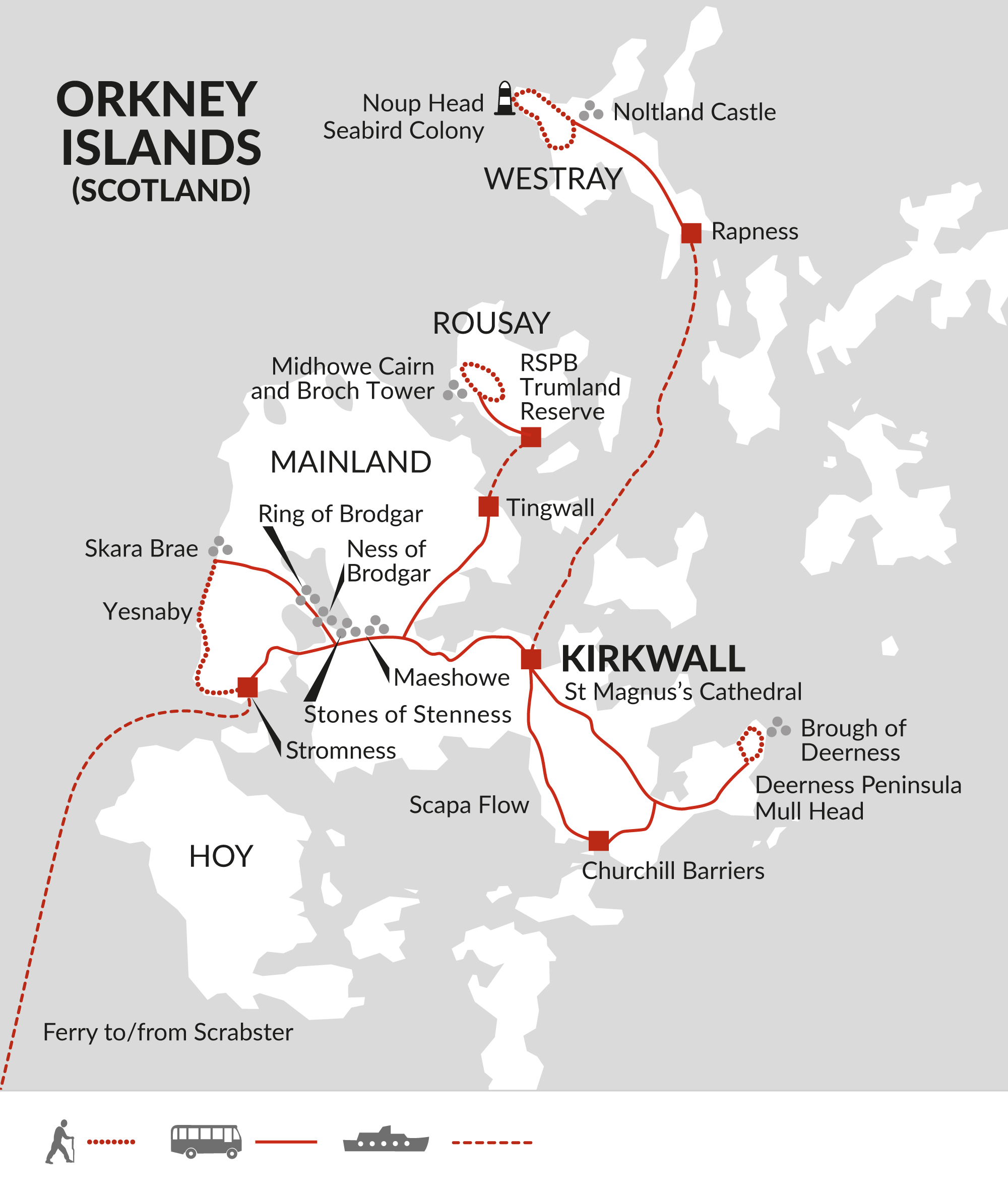 The trip starts at Inverness Rail Station at 14.00. After meeting we have a scenic drive (3hrs) along the northeast coast of the Highlands to Scrabster port, where our ferry sails (1.5hrs) across the Pentland Firth to Stromness town on Mainland, the principal island of Orkney. From here we drive to our hotel base for the holiday in the historic town of Kirkwall. It is possible to eat on the ferry and the expected arrival time at the hotel is around 21.00. The Tour Leader plans to meet for the introductory briefing upon arrival in the hotel, or after check in. Kirkwall is situated on the northern coast of Mainland and is the largest settlement and administrative capital of the Orkneys with a population of about 9,300. At its heart stands St. Magnus Cathedral, which was founded in memory of Saint Magnus Erlendsson, one of the Norse earls of Orkney (1108-1117), who became its patron saint. Next to the Cathedral are the ruins of the former Bishop's Palace and Earl's Palace. Kirkwall has many 17th-18th century houses and other structures in the local vernacular style. It is possible to reach Kirkwall by flight or ferry from Aberdeen. Please advise us at time of booking if you intend on making your own way to the hotel. Please note that the order of days may be changed around in accordance with the weather and ferry schedules.

The Deerness Peninsula is on the easternmost part of the Mainland. Here we start our first walk and before long reach the Brough of Deerness - a well-preserved Viking Age settlement on top of a sea stack - and an impressive collapsed sea cave called the Gloup that produces strange gurgling noises! From here we continue along the coastline around Mull Head until we reach the Covenanters Memorial - commemorating 200 prisoners who perished off the coast in 1679. Finally our walk brings us back to the vehicles. Later we drive to visit the simple Italian Chapel on Lambholm Island, built by POWs in WWII, and discover more wartime history at the Churchill Barriers and Scapa Flow. The rest of the afternoon is left free in Kirkwall where you can visit St Magnus Cathedral (closed Sundays) and the Orkney Museum that is housed in one of Scotland's best-preserved sixteenth century town-houses - Tankerness House and gardens - displaying prehistoric, Pictish and Viking collections of international importance. The Orkney Wireless Museum covers the history of radio and recorded sound. Today's easy-graded walk will take approximately 3 hours and will cover a distance of 10 kilometres along grassy trails with a total ascent and descent of 150 metres.

We take the ferry from Kirkwall harbour to Westray in the far northwest, a fantastic voyage out along the old Viking sea route called the Swan's Path that will take about 1.5 hours. It is the second largest of the Orkney Isles, affectionately known as the 'Queen o' the Isles', with a population of just 600 people. Today's highlight is a circular walk out to Noup Head to see one of the largest seabird colonies in the British Isles, second only to St Kilda. Here we'll find guillemot, kittiwake, razorbill, shag and fulmar as well as wild flowers, caves and lighthouses. Puffins are normally seen on Westray between the end of April and mid-August. The open ground above the cliffs offers superb views and is often beautifully carpeted with yellow, white and purple flowers. From here we continue our walk south along the west coast of Westray. After the walk we visit Noltland Castle ruins, built around 1560 for Mary Queen of Scots. If time permits we may visit Pierowall village before catching the ferry back to Kirkwall. Today's easy-graded walk will take approximately 3 hours and will cover a distance of 9 kilometres along grassy clifftop trails with a total ascent and descent of 200 metres.

We start the day with a short drive back to Stromness where we start our walk northwards following the west coastline of Mainland that is dominated by cliffs, and on the trail we pass the impressive sea stacks of Yesnaby and North Gaulton. Along the way look out for the Primula Scotia (Scottish Primrose), Orkney's most famous flowering plant. The walk finishes at the site of 5000-year-old Skara Brae, one of the best-preserved Neolithic villages in Europe. There is the option to visit Skail House, a 17th Century Laird's manor house. If time permits, we may drive a short distance to visit the Earl's Palace - remains of a 16th century castle built by Robert Steward Earl of Orkney and or include a stop at the Kirbuster Museum (1595 house, FOC). Today's moderately-graded walk will take approximately 4-5 hours and will cover a distance of 12.5 kilometres along grassy clifftop trails, sometimes boggy, with a total ascent and descent of 300 metres.

On a small stretch on land between the Loch of Stennis and the Loch of Harray on Orkney's Mainland we will find the archaeological sites of the Ring of Brodgar and the Stones of Stenness (both older than Stonehenge), and the burial tomb of Maeshowe complete with Viking graffiti. Together with Skara Brae, they form the Heart of Neolithic Orkney UNESCO World Heritage site. This morning we will explore all these extraordinary 5000-year-old sites, including the ongoing Ness of Brodgar Excavation. In the afternoon we will visit the pretty town of Stromness, Orkney's second biggest town and home of Orkneys most famous poet George Mackay Brown. You may choose to visit Stromness Museum. Today is a relaxed day with around 3 kilometres walking between the Neolithic sites.

After breakfast we drive a short distance to Tingwall port to catch the ferry across the waters to Rousay Island - known as 'The Egypt of the North' due to its proliferation of archaeological monuments. While there we will visit the large Midhowe Neolithic chambered cairn and Midhowe Iron age Broch Tower. We walk over the moors to Knitchen Hill and Blochnie Hill; the highest point on the island at 275m, which provides magnificent views over the seaboard and of the nearby islands Egilsay and Wyre. This walk is also partly within the RSPB owned Trumland reserve where we may see raptors and the short-eared owl. If time permits we may visit Trumland house and gardens (stately home). We return later this afternoon to Kirkwall. Today's easy-to-moderate graded walk will take approximately 3-4 hours and will cover a distance of 9 kilometres on moorland paths, sometimes boggy in places, with a total ascent and descent of 350 metres.

After breakfast and checking out of the hotel there is free time. We drive back to Stromness ferry terminal for the 11am departure. If you intend to fly back from Kirkwall, you will have to make your own way - by taxi or bus - to the airport. From Scrabster we will drive south to Inverness arriving at the rail station at about 4.30pm where the trip ends. We do not recommend booking an onward flight from Inverness before 6pm. NB - The Ferry schedule changes on 1st September, so any departure after this date will catch the 16.45 ferry, which means an arrival back in Inverness by 10pm.