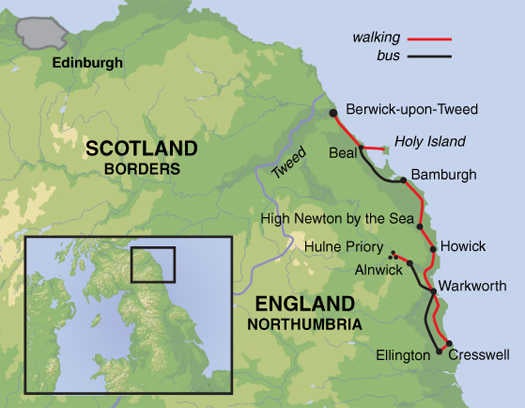 Arrive in Warkworth and take a stroll around the town and the medieval Warkworth Castle, with fabulous river and coastal views from the walls. Stay 3 nights here.

Today explore Alnwick and its world-famous castle, with its 14th century keep, world-class formal gardens and ‘Capability’ Brown landscaping. Enjoy a delightful circular walk around Hulne Park with its woodlands, cave, 13th century Priory and the River Aln that runs through the town.

Take the local bus to Ellington and head out to Cresswell to take your first steps along the Northumberland Coast Path. With spectacular views over wide sandy beaches, backed by sand dunes, you head north along the coast towards Amble, with its marina, then back to Warkworth along the River Coquet.

The route today follows the Coast Path north through Alnmouth and along past more wide sandy beaches and rocky headlands to Howick. Pass through the seaside village of Boulmer, close to RAF Boulmer, home to the UK’s Aerospace Surveillance and Control System Force Command.

Walk along the coast to the north, passing through the fishing village of Craster, famous for its kipper smoking. You could visit the Arnold Memorial Nature Reserve while you’re in Craster or head on to Dunstanburgh and its dramatic castle ruins that sit on a remote headland. Continue on to overnight in High Newton by the Sea.

Today's walk takes you along the coast to one of the most iconic views in the British Isles – Bamburgh Castle. Few vistas compare to the wide beach and castle backdrop at dusk but there’s coastal and inland walking to be enjoyed along the way with fishing villages, rocky headlands and spectacular beaches.

Continue your journey north to Holy Island today (partly by local bus) to the end of the tidal causeway before heading over to the island and exploring its National Nature Reserve. Overnight on Holy Island.

Back over the tidal causeway from Holy Island, you continue north along the Northumberland Coast Path towards Berwick-upon-Tweed, England’s northernmost town that sits at the mouth of the River Tweed. Originally an Anglo-Saxon settlement, Berwick is a market town with centuries of history, including its Georgian Town Hall, Elizabethan ramparts, Britain’s earliest barracks buildings and 13th century Berwick Castle. For the art historians, Dewars Lane, as well as other Berwick locations, was painted by L.S. Lowry in the 1930s.